ABOUT: This is an annual study that looks at the global use of Twitter by world leaders as they exercise Digital Diplomacy. According to this study, more than half of the world’s foreign ministers from every region of the world and their institutions are active on Twitter. The report discusses how Twitter is fostering "virtual diplomatic networks" as well as social marketing campaigns that rely heavily on Hashtag Diplomacy. The most 'followed' global leaders who have a strong presence on Twitter and the "most active accounts" are also highlighted in the report. Pope Francis is identified as the "most influential tweep" and Spanish as the "most tweeted language." The report shows that diplomats are exploring new technologies and social media platforms such as Twitter as they design their digital diplomacy strategies and redefine their 21st century statecraft.

ABOUT: Can Facebook and Twitter change the world? Can all the nifty new social-networking sites promote democracy and a better understanding of American values around the world? The potential is certainly there—as was seen in the invaluable Twitter updates during the post-election protests in Iran. The U.S. government is embracing Web 2.0 for an ambitious strategy of reaching previously untapped populations around the world—calls it Public Diplomacy 2.0. While the potential progress is undeniable, so is the potential danger. Public diplomacy expert Helle Dale explains the recent developments, strategies, benefits, and risks of cyber diplomacy.

ABOUT: The U.S. government must develop a truly comprehensive Internet freedom strategy. Over the past several years, it has taken important, positive steps in a number of areas, from providing technologies to shaping norms to engaging the private sector. It must now build on these efforts to integrate other elements, including trade policy, export control reform and others. Underlying all these efforts is a bet – essentially the same bet that the United States placed during the Cold War – that supporting access to information and encouraging the free exchange of ideas is good for America.

ABOUT: This report examines the transformational changes in diplomacy’s 21st century context: permeable borders and power diffusion, new diplomatic actors and issues, digital technologies and social media, and whole of government diplomacy. It critically assesses implications for diplomatic roles and risks, foreign ministries and diplomatic missions, and strategic planning. In an attempt to bridge scholarship and practice, the report explores operational and architectural consequences for diplomacy in a world that is more transparent, informal, and complex.

ABOUT: E-diplomacy is not a boutique extra for foreign ministries and increasingly will be central to how they operate in the 21st century. Digital platforms will require cultural change, but they also promise a wide range of benefits, whether that is taking a much more active role in managing their public diplomacy messages or engaging audiences that were previously out of reach.

ABOUT: This report argues that one of the biggest challenges for foreign ministries is adaption to a new environment in which new technologies need to be integrated into diplomacy. State is at the vanguard of this compared to other MFAs. It describes the history of eDiplomacy at State, three of its main foci (public diplomacy, internet freedom and knowledge management) and gives recommendations for other foreign ministries. These recommendations include paying more attention to social media, cooperation with like-minded states on issues of internet freedom and learning from State in terms of knowledge management. Areas in which State could improve are consular affairs, disaster response, diaspora engagement, engagement with external actors, coordination with partner governments and, from a whole of government perspective, policy planning.

ABOUT: This article suggests ediplomacy efforts at State can be structured around eight different work programs. Using this conceptual framework, Public Diplomacy is currently the largest component of this ediplomacy effort if measured in human resources terms, although more money is probably spent on Internet Freedom, with much of the work in this space outsourced. The eight work program model, also suggests areas where future ediplomacy work could be amplified, with Policy Planning and Disaster Response, surely high priority areas. For other foreign ministries that have been concerned about developing the theory before they get to the doing, the message is clear. Ediplomacy has arrived. The choice for them is to either embrace the opportunities and advantages ediplomacy presents or to be passive and be shaped (and sidelined) by this latest technological revolution.

ABOUT: RAND researchers conducted an assessment of the State Department’s Bureau of Democracy, Human Rights, Labor (DRL) Internet freedom portfolio for Fiscal Year 2012-13. Applying an analytical methodology employing both multi-attribute utility analysis and portfolio analysis techniques, the assessment showed good alignment between State’s strategy and the accumulative effect of the eighteen funded projects. Additionally, the portfolio was assessed to be well balanced with an unrealized potential for supporting emergent State Department needs in enlarging political space within authoritarian regimes. We found that the investment in developing Internet freedom capacity and capabilities would likely have residual value beyond the portfolio’s funded lifespan, with positive, but indirect, connections to civic freedom. Moreover, promoting Internet freedom appears to be a cost-imposing strategy that simultaneously aligns well with both U.S. values and interests, pressuring authoritarian rivals to either accept a free and open Internet or devote additional security resources to control or repress Internet activities. Finally, it was assessed that the value of such analysis is best realized over multiple stages of the portfolio’s lifecycle.

ABOUT: The Clingendael Institute was commissioned by the Ministry of Foreign Affairs of Finland to write this report which discusses the changing environment of diplomacy in terms of four key dimensions of what is termed integrative diplomacy: contexts and locations, rules and norms, communication patterns and actors and roles. It explores the consequences of this changing diplomatic environment for the processes and structures of diplomacy, particularly ministries of foreign affairs. The report is one output from a larger and developing international project on Futures for Diplomacy.

ABOUT: This report emanates from the second annual Aspen Institute Dialogue on Diplomacy and Technology. The Dialogue addresses ways that diplomacy can and should incorporate new information and communications technologies (ICT) in the days and years ahead. Given the social, many-to-many nature of these new technologies, it naturally focuses on public and citizen diplomacy, though not exclusively. In the first year, the Dialogue explored how technology has changed the nature of diplomacy in all its facets: traditional, public, citizen, cultural and business diplomacies.

ABOUT: For nearly all of the Bush administration, America’s standing in most parts of the world remained dismally low. The reputation it left behind after 2008 stood ready for a dramatic overhaul with the arrival of the popular Barack Obama. Beginning almost immediately with a positive new message offered to the Muslim world, Obama’s public diplomacy is decidedly less notable for its substantive achievements than the strides he and Secretary Hillary Clinton have made in modernizing the means of public diplomatic discourse. During its time in office the Obama administration has worked to broaden and accelerate communications with audiences abroad by inserting social media and technology exchanges into the toolkit of the public diplomat. Yet the administration’s tendency toward strategic incoherence means public diplomacy strategy remains a mystery. As the content of public diplomacy falls behind innovations in methods to deliver it, one has to wonder: what is the world hearing?

ABOUT: The key to Digital Diplomacy is a) the ability to shape a message quickly and adapt it as conditions change and b) to be able to actually engage in dialogue with the target audiences in the foreign country; two elements that have never before been possible. These two factors are very powerful. Governments that understand this and engage with a strategy will have an effective Soft Power tool.

ABOUT: This report is a result of the first annual Aspen Institute Dialogue on Diplomacy and Technology. The topic for this inaugural dialogue is how the diplomatic realm could better utilize new communications technologies. The group focused particularly on social media, but needed to differentiate among the various diplomacies in play in the current world, viz., formal state diplomacy, public diplomacy, citizen diplomacy and business diplomacy. Each presents its own array of opportunities as well as problems. In this first Dialogue, much of the time necessarily had to be used to define our terms and learn how technologies are currently being used in each case. To help us in that endeavor, we focused on the Middle East. While the resulting recommendations are therefore rather modest, they set up the series of dialogues to come in the years ahead. The technologies will change over time. What is important is that careful attention be paid in every generation to how they can best be used in the service of the ultimate goal of diplomacy: worldwide peace and stability. The means will change but the ends remain the same.

ABOUT: This is the first publication in a series designed to analyze how social media diplomacy helps create – and maintain – a true conversation between policymakers and citizens, between diplomats and foreign public. The book is not a technical manual, or a list of what to do and not to do. It is rather a collection of information, anecdotes, and experiences. It recounts episodes involving foreign ministers and ambassadors, as well as their ways of interacting with the tool and exploring its great potential. It aims to inspire ambassadors and diplomats to open and nurture their Twitter accounts – and to inspire all of us to use Twitter to better listen and open our minds.

ABOUT: This report explores public diplomacy 2.0 for the Royal Embassy of the Netherlands and its various Consulates in the United States. Public diplomacy 2.0 includes a government’s presence on social media, such as Facebook, Twitter and blogs. In 2010, the Royal Embassy of the Netherlands in Washington, D.C. and the Consulate General of the Netherlands in San Francisco, have prioritized digitalization and engagement on social media. Adding to the ongoing development and implementation of the social media strategy by the Department of Public Diplomacy, Press and Culture, a meta research on public diplomacy 2.0 was conducted. This paper explores the structure, organization, objectives, audience, regulation and evaluation of effective web 2.0 practices. Social media asks for a hybridization of open and closed communication practices. 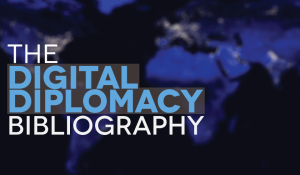