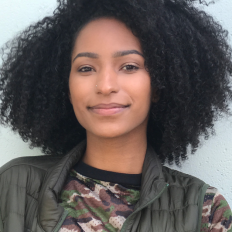 Austin is a Master’s in Journalism candidate at USC Annenberg. She is also a double Trojan who earned her bachelor’s degree in Spanish and a double minor in American Studies & Ethnicity and Psychology at USC Dornsife. During her time as an undergraduate student at USC, Austin studied abroad in Madrid and did volunteer work in the Dominican Republic with Volunteers Around the World. In addition to her travels Austin worked at USC Gould School of Law’s Post Conviction Justice Project, an organization that represents imprisoned people at their parole hearings. After graduating from USC, Austin worked on Sony Pictures Television’s Diverse Directors Program in which she worked closely with up and coming directors of color and studio executives. Following her time at Sony, Austin served as a marketing coordinator at Terry Hines & Associates’ multicultural public relations branch called The MRKT. As she embarks on her career as a journalist, Austin plans to create short-form documentaries for online publications that explore issues at the intersection of pop culture and politics. Austin would also like to write first-person creative nonfiction pieces and author several books.