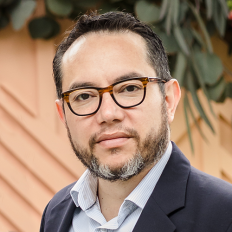 César Corona is CPD Assistant Director of Engagement and CEO of ExpoMuseum.com. He specializes in World Expos, public diplomacy, and governmental transparency. His research on transparency in World Expos received an award by the Mexican Federal Institute for Access to Public Information (IFAI) in 2006. Three years later, his thesis “Public Diplomacy in International Expositions: Mexico and Canada in Expo 2005 Aichi” received an award from the Center for Research on North America (CISAN) of Universidad Nacional Autónoma de México (UNAM).

He holds a B.A. in International Relations from UNAM and an MPD in Public Diplomacy from the University of Southern California (USC), which he pursued as a Fulbright-Garcia Robles, CONACYT, and Rafael Osuna scholar. While at USC, he was a research intern at CPD under the supervision of Jay Wang, and a research assistant of CPD Faculty Fellow Pamela Starr in the “US-Mexico Network @ USC” in the College of Letters, Arts and Sciences. Under a Fulbright-Garcia Robles Public Policy grant, Corona served as Public Diplomacy Special Advisor for the Office of Strategic Partnerships of the City of Los Angeles. Corona has also interned at the Direction General of Protocol of the Mexican Ministry of Foreign Affairs, the Consulate of Mexico in Los Angeles, and the Bureau International des Expositions (BIE).

Corona has worked for USAID at the U.S. Embassy in Mexico, and in different capacities at Expo 1998 Lisbon, Expo 2000 Hannover, Expo 2010 Shanghai, Expo 2012 Yeosu, Expo 2015 Milan, and Expo 2020 Dubai. He has taught international relations, international communication, new media, and marketing courses at UNAM and the Fashion Institute of Design & Merchandising (FIDM).

Before entering the world of international relations, Corona spent several years studying physics, electronics engineering, and music (percussions), in addition to foreign languages. His first contact with public diplomacy occurred during his semester as an exchange student at McGill University in 2005.

He recently authored the First 100 Days Memo: U.S.-Mexico Policy Recommendations for the Biden Administration, as a Mexico Initiative Fellow of the Pacific Council on International Policy.

EXPOnential: Diplomacy for the Public at Expo Shanghai 2010. Blurb: July 2011.