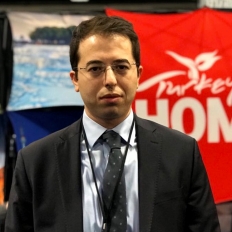 Halid Bulut joined the Yunus Emre Foundation in 2014, where he now serves as the Executive Director of the Foundation’s newest branch in Washington, D.C. He is responsible for managing the branch and developing relations with organizations, corporations and government agencies in the United States. Prior to his appointment as Executive Director, Mr. Bulut served as a Financial Affairs Manager with the Foundation in Ankara, Turkey from 2014 until March 2017. Halid began his career as an internal auditor at Ziraat Bank in 2010. Halid Bulut graduated from Hacettepe University in 2010 with a Bachelor’s Degree in Economics and in December 2017 participated in CPD's Mini-Course in Public Diplomacy.