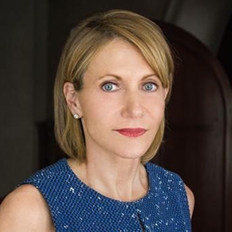 Kimberly Marteau Emerson is a lawyer, advocate and civic leader in the fields of public service, international affairs and social justice. She has served in the federal government (Presidential appointee), in the entertainment industry, and in leadership positions on multiple boards. From 2013-2017, she lived in Berlin with her husband, U.S. Ambassador to Germany John B. Emerson (ret.), where she worked both with the U.S. Embassy as well as independently to drive projects on multiple platforms, including promotion of German immigration and integration efforts related to the 2015/2016 refugee crisis; and addressing the issue throughout Germany of bringing women to the economic and political decision-making table. She is currently writing a memoir about her experiences there.

Kimberly worked in the Clinton Administration as a senior political appointee and spokesperson for the U.S. Information Agency (now housed in the State Department). She currently serves on the Board of Directors of Human Rights Watch, the Advisory Board of the USC Center on Public Diplomacy, and is a member of the Council on Foreign Relations and the Pacific Council on International Policy. She is a founding member of the Transatlantic Advisory Board of United Way in Germany, a member of the Board of Governors of Bard College Berlin, and on the Advisory Boards of the Thomas Mann House and KCRW-Berlin, and divides her time between LA and Germany. She has been an election observer in Nigeria, and engaged in relief projects in Lesbos, Greece during the 2015 refugee crisis, Sri Lanka post-tsunami and New Orleans post-Katrina. Kimberly has been deeply active in U.S. Presidential politics and helped many Democratic candidates on the local, state and federal level. She has also received several awards for her civic engagement. Previously, Kimberly practiced law with Tuttle & Taylor, and worked in Hollywood as a business and creative executive with Savoy Pictures and Sony Entertainment. She holds degrees from UCLA (B.A.), UC Hastings College of the Law (J.D.) and l’Université de Droit d’Aix-Marseille (D.E.S.U.). Languages: English, French, conversational German.