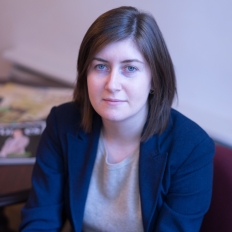 Mariami Khatiashvili is a public diplomacy scholar from Georgia. She received her Ph.D. in American Studies from Ivane Javakhishvili Tbilisi State University (TSU). Her doctoral dissertation examined U.S. public diplomacy objectives in Georgia in the 1980s. Mariami is a visiting lecturer at TSU and at St. Andrew – the First-Called Georgian University of the Patriarchate of Georgia. She holds BA and MA degrees in American Studies from TSU. She has been a chairperson of American Studies Students Scientific Group at TSU since 2012. From 2013 to 2014 she worked as an intern for the Public Affairs Section at the U.S. Embassy in Tbilisi, Georgia. In 2016 and 2017 she was an intern in the U.S-Canada division of the Ministry of Foreign Affairs of Georgia. In June and July of 2017, she completed the United States Department of State’s exchange program Study of the United States Institutes for Scholars on U.S. foreign policy at Bard College in Annandale-on-Hudson, New York. Her research interests include U.S.-Georgia relations, public diplomacy, cultural diplomacy, citizen diplomacy, national security, and strategic communication.