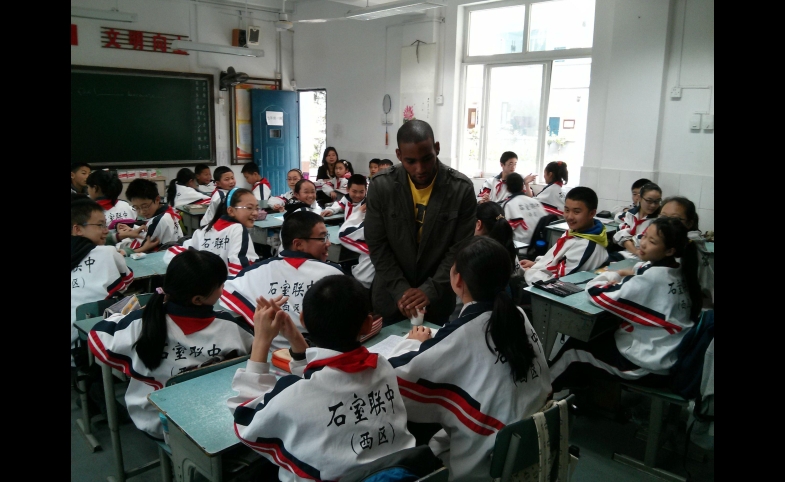 The U.S. government has been making a great effort recently to promote study abroad in China. This March, First Lady Michelle Obama went to China with her daughters and mother, where the emphasis of her trip was not on politics but on education and shared values. During her speech at Peking University, Mrs. Obama stressed the importance of study abroad as a powerful vehicle for people-to-people exchange and citizen diplomacy. The logic behind this agenda is not difficult to grasp. Education exchange and study abroad programs have always been the focus of U.S. public diplomacy. China’s status as a rising global power makes this attention on study abroad in China especially crucial.

"The 100,000 Strong Foundation holds network-making power and uses it to strengthen public diplomacy."

The 100,000 Strong Foundation connects and creates partnerships between institutions and organizations related to study abroad. Carola McGiffert, the Foundation’s President, told me in an interview, “The function of the 100,000 Strong Foundation is to build a platform for people to understand the importance of the U.S.-China relationship and let more American students learn Mandarin and study in China.” The Foundation was created to facilitate and maintain the success of existing study abroad organizations, and to build a stronger network so that they are able to better connect and collaborate. In this way, the Foundation acts as a network switcher that connects organizations in different fields.

The power of switching can be seen as the ability to create social capital. The specific value of a switcher is to broker information and control the project that brings networks together. The 100,000 Strong Foundation is a network switcher, or broker, in the network sense. Through the act of switching, the Foundation connects different networks and facilitates the information flow. Organizations which connect with the Foundation can provide information and resources to each other. In addition, by socializing with high-level leaders and premium organizations, some network actors are able to gain social credential.[i]

The graph below illustrates the full picture of the network. The data was collected through Internet searches on connections of the organizations in the network.[ii] The following section will analyze the network by the fields of organizations (nodes) and will attempt to demonstrate what kinds of social capital are being created. 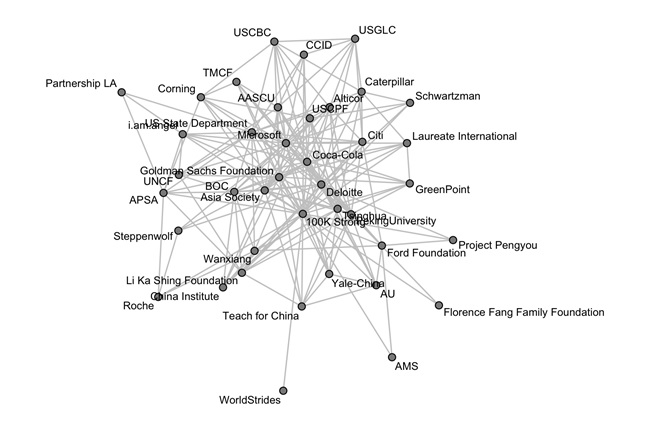 The 100,000 Strong Foundation’s funding mainly comes from private sectors, according to McGiffert. The Foundation reaches out to corporations, entrepreneurs, and philanthropists.Transnational corporate partners such as Coca-Cola, Microsoft, Citigroup, and Deloitte play a big role in the 100,000 Strong network. Their partnerships indicate a two-way beneficial relationship: on the one hand, these corporations are able to connect with high-level leaders in both countries, while gaining advantages from investing in U.S. study abroad in China. On the other hand, the 100,000 Strong Foundation can leverage global networks through these corporations and expand their influence in the target country. The Foundation also has ties with philanthropic organizations, such as the Ford Foundation. Last year, Steve Schwarzman, Chairman, CEO and Co-founder of Blackstone and an advisory council member of the 100,000 Strong Foundation, sponsored the Schwarzman Scholars program in Beijing Tsinghua University to rival the Rhodes Scholarship. Both the U.S. and China political leaders openly expressed their support for the program, which brings in the networks of Chinese politicians and universities.

The 100,000 Strong network also values relationships with students. American students are nodes of this network, not only as beneficiaries but also as influencers. The Foundation partners with Project Pengyou, an online alumni social network which connects American students who have studied or are studying in China. By connecting through an online social networking platform, students are able to share their experiences and knowledge of study abroad in China. Holly Chang, head of the program, told me that the informal partnership between Project Pengyou and the 100,00 Strong Foundation means engaging the network of programs and program directors, as well as students on the ground. Project Pengyou is also building an online resource accessible to potential students who want to study in China. Schools and companies that want to hire American interns can also post announcements through the website. Besides Project Pengyou, the Foundation also partners with another similar online networking organization, the American Mandarin Society.

Organizations like Project Pengyou and the American Mandarin Society manage individual-level networks. We can consider it a sub-network under the overarching umbrella of the 100,00 Strong network. The nodes here include students, schools/universities, and companies. Chang herself recognizes the role of Project Pengyou as connecting the dots. She said, “It is not like [programs on the ground] are completely isolated to begin with. We’re providing an online and visual way for them to connect even further. We are really just complementing a lot of the efforts that have been going on on the ground.”

Moreover, the 100,000 Strong Foundation works with organizations such as foundations, educational institutions, and corporations promoting study abroad in China and boosting Mandarin education in the U.S., especially among a diverse student body. The i.am.angel Foundation is one funding provider that offers scholarships for students in need. It works with the 100,000 Strong Foundation to bring Mandarin courses to the Boyle Heights Center in Los Angeles, offering students in the neighborhood opportunities to engage with Chinese language and culture, which paves the way for them to study abroad in China.

The 100,000 Strong Foundation has expanded its connections to educational organizations such as the American Association of State Colleges and Universities. Third-party providers for study abroad such as Americans Promoting Study Abroad, Community Colleges for International Development, and Teach for China are listed as the Foundation’s partners. The Foundation also connects with organizations that specialize in U.S.-China relations, such as the China Institution and the Asia Society. The Foundation is housed in the School of International Service at American University in Washington D.C., which makes the Foundation a natural hub for connecting educational and political worlds.

The 100,000 Strong Foundation has existed for a year, and its social network of study abroad in China continues to grow. By mapping the network’s nodes and ties, we can see it brings in stakeholders from various fields in both countries. Through building a social network, the Foundation facilitates the formulation of social capital among organizations, takes full advantage of the existing resources, and possibly expands the existing network structure. In this way, this public diplomacy mission does not make repetitive investments in creating more study abroad programs, but wields the network-making power to navigate existing resources and take advantage of social capital.

As a newly established organization, the 100,000 Strong Foundation has a long way to go. It needs to make sure their efforts of creating social capital through connecting organizations in the network directly benefit the U.S. study abroad in China. Besides, in order to bridge the cross-border network, the Foundation needs to connect more Chinese organizations. Lastly, as McGiffert and many American study abroad students in China told me, the biggest challenge for study abroad is funding. Therefore, the Foundation needs to secure more sources of funding for students in need.

[ii]The full list of the 100,000 Strong Foundation’s partners can be found at http://100kstrong.org/. The network graph not only contains direct partners, but also common connections that some of the partners share.