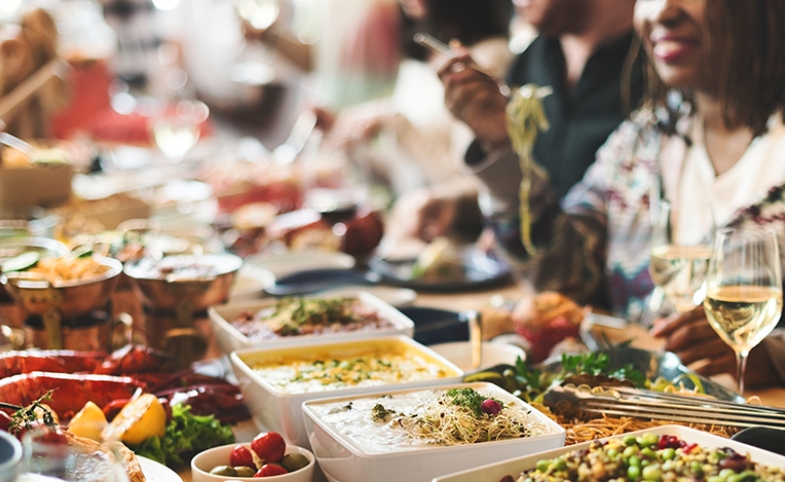 Note from the CPD Blog Manager: The author is a CPD Research Fellow (2021–23), whose project "Symbolic Politics for Peace" focuses on symbolic politics as a tool of cultural diplomacy and soft power that is aimed at influencing ordinary people toward reconciliation and peace in contexts of violent identity-based conflict around the world.

Food rarely enters mainstream conversations in peace and conflict studies. You won’t find it, for instance, in most of the field’s textbooks, monographs or course syllabi. Until recently, this was true of my work in this field as well. I argue, though, that culinary diplomacy, or gastrodiplomacy, common in the study and practice of public diplomacy, can and should be an important tool for peace researchers and practitioners more broadly. While public diplomacy is most often considered in international relations, its tools—including those surrounding food—hold equal promise in contexts of intergroup conflict within countries.

I am studying deliberate efforts to use food to endeavor to change narratives toward more inclusive identities in contexts of group-based conflict. I am interested in high-level “culinary diplomacy”—picture the lunch menu served at the 2018 inter-Korea summit or the work of the American Chef Corps. I am equally investigating people-to-people “gastrodiplomacy,” chefs and restaurateurs, cookbook authors, festival organizers and others—the A-Sham Arabic Food Festival in Israel is on my calendar this fall—who use food to engage in “track 3 diplomacy: People to people diplomacy undertaken by individuals and private groups to encourage interaction and understanding between hostile communities."

I want to learn more about the range of efforts, deliberations and choices that underlie them and the nuanced and complex effects of culinary diplomacy and gastrodiplomacy in contexts of group-based conflict. Readers: What examples should be on my list? Please reach out!

My broader research agenda examines efforts to build inclusive institutions and identities in the aftermath of violent ethnic conflict. I have focused principally on constitutions and peace agreements, government policies as well as formal education. As I researched each of these topics, though, my spontaneously emerging file on the peacebuilding potential of cultural and symbolic spaces grew. Alongside sports, arts and fashion, food—initially surprising to me—topped the list.

That food could contribute to peace makes sense: identities are often central to group-based conflict, and while it is often taken for granted, food is central to our identities. "Tell me what you eat,” wrote French gastronome Jean Anthelme Brillat-Savarin (1755–1826), “and I will tell you what you are." American celebrity chef and author Anthony Bourdain elaborated more recently: "Food is everything we are. It's an extension of nationalist feeling, ethnic feeling, your personal history, your province, your region, your tribe, your grandma." Indeed, a group of psychologists found that when people are primed to think of their identity, they like foods associated with that identity even more. That is, Canadians liked maple syrup more than honey only when they were first reminded of their Canadian identity.

Given the important links between food and identity, food helps define ‘us’ and ‘them.’ My New York University colleague, Fabio Parasecoli’s new book, Gastronativism, focuses on “the ideological use of food to advance ideas about who belongs to a community and who does not.”

This is often exclusive and conflict-conducive. Among Parasecoli’s many global examples, he points to a group in Nice, France who used the anti-immigrant slogan, “Yes to socca [a local flatbread], no to kebab” and one in Como, Italy, who similarly advocated, “Yes to polenta, no to couscous.” Speaking to nuanced food choices as defining boundaries, a group of economists found that when conflicts intensify in India, Hindus become more vegetarian and avoid beef more while Muslims are more likely to avoid pork. American University’s Johanna Mendelson-Forman pioneered an entire class on “Conflict Cuisine.”

But food also holds great potential for creating a more inclusive “us”—a key part of peacebuilding. While not naive to the divisive power of food, my new project concentrates on the positive side. While conducting research in France this summer, I encountered the KoussKouss festival in Marseille, which has a goal of promoting “sharing and living together” through “multicultural exchange” and a “simple, joyful street food accessible to all” (my translations).

I met with Fanny Borrot in Paris, festival director for Refugee Food Festival, which has a goal of changing the predominantly negative views of refugees through food. Among its many activities, the group partners refugee cooks from its program with French chefs to co-create menus and meet with diverse diners. In response to my question about the rationale for using food as the entry point to foster positive social change, she told me, “We need for people to like their cooking because, in turn, we need people to like them, and to know them, and to integrate them.” Speaking of the value of family recipes, food histories and identities, Borrot explained, “That is why we chose food and encounters with people through cuisine.” As a supporter of the Festival, UNHCR spokesperson Céline Schmidt describes being “moved by the response.”  She explains that “it changed the way local citizens were seeing refugees, created understanding and connections, and a new mobilization for welcoming refugees in the city” and that after the Festival, public and private organizations expressed interest in becoming further involved.

That the Latin words “company” or “companion” stem from “the people with whom one shares bread” speaks to historic recognition of the power of food in bringing people together. The well-recognized practices of cultural and gastrodiplomacy merit attention from peace and conflict scholars, not only in international relations, but in intrastate conflict as well.

Elisabeth King
CPD Research Fellow 2021-2023
Professor of International Education and Politics, New York University
YOU MIGHT BE INTERESTED IN...