Home|Setting the Table for Diplomacy 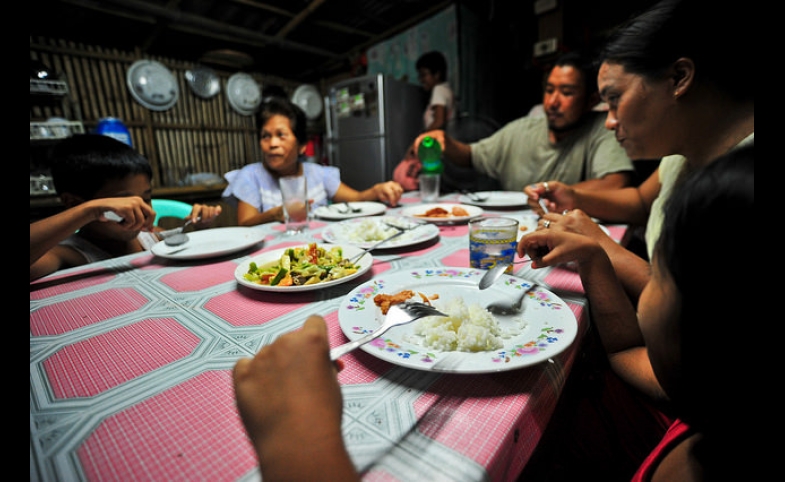 In the latest instance of flag following fork, the U.S. State Department launched a new culinary diplomacy program, entitled "Diplomatic Culinary Partnership: Setting the Table for Diplomacy” The new Diplomatic Culinary Partnership initiative was unveiled on September 7, 2012 at the penthouse of the State Department, and this gastrodiplomat was on hand for the lovely soiree.

In the John Quincy Adams Room, there were displays showcasing how American presidents had hosted foreign dignitaries complete with elegant menu cards, mementos and pictures from the majestic state dining affairs (What do you serve to the King of Morocco? Lemon garlic-crusted lamb, of course). Also on display were various cables and memos that linked food to the diplomatic process, like the famous Van Cliburn Chocolate Memorandum from the pianist’s chocolate tete-a-tete with Soviet Premier Khrushchev.

In the lavish and stately Benjamin Franklin Room, the new program was on full display. The theme “America the Beautiful” showcased the full landscape of American cuisine. There were culinary allusions ranging from “Where the Buffalo Roam,” which included bison short rib with fig, smoked almond, charred onion and juniper, to “Amber Waves of Grain,” which entailed roasted farro salad with smoked Carolina swordfish.

The program that accompanied the splendid tables featured remarks by Ambassador Capricia Penavic Marshall, who serves as U.S. Chief of Protocol. Ambassador Marshall stressed that “food matters” and spoke to the people-to-people connections that can be forged at the dining table. On the new initiative, the ambassador stated: “By showcasing the best of American cuisine and creativity, we can show our guests a bit about ourselves. Likewise, by incorporating elements of our visitor's culture, we can demonstrate respect and a desire to connect and engage.”

While Secretary of State Hillary Clinton was not on hand, she joined in with a video message, astutely calling the use of food “the oldest diplomatic tool.” Undersecretary for Public Diplomacy Tara Sonenshine was at the gala to deliver remarks, indicating the connection that State’s PD branch has to the new initiative. Undersecretary Sonenshine highlighted some of the people-to-people connections that the new initiative was fostering with chefs from around the world through the International Visitors Leadership Program—a component I will discuss later.

And on to the main course. The new State Department Culinary Diplomacy Initiative has two stated objectives:

State Department’s International Information Program (IIP) department is slated to link this traveling chef corps with U.S. embassies and foreign publics for public diplomacy programs such as cooking demonstrations and other culinary endeavors. I love the idea of these ambassadorial chefs teaching the Chinese or Vietnamese how to make chicken fried steak, or Cajun jambalaya to biryani fans in South Asia.

There is also a cultural exchange component to the program that I think is terrific. The State Department’s Educational and Cultural Affairs Bureau sponsors the International Visitors Leadership Program—a professional exchange program that brings emerging foreign leaders to visit America. As part of the initiative, young chefs from 25 countries such as Brazil, South Africa and Poland were on hand for the kick-off event, before they head out on a culinary tour of the United States to meet their American chef counterparts, and learn about farm-to-table and other sustainable farming projects.

On the whole, I think the program is quite good. It is innovative in scope and dimension, and takes good advantage of public-private partnerships. My only recommendations would be to get state-level support. There are numerous states that support international activities, as I saw at the Shanghai Expo and Taipei Flora Expo—where various states like Texas, Montana and Indiana helped support the expo displays. Just as there are nation brands, there is also room for state branding especially in areas of cultural diplomacy and gastrodiplomacy.

States like Texas, California and New York already have their own international brands. Surprisingly, even Kentucky does from its connection to the Colonel’s chicken, and not just because of the recent firebombing of a KFC in Lebanon. I have found numerous places around the globe, most recently in Iraq, that the word “Kentucky” is simply used as shorthand for fried chicken. That is state-based branding without compare and represents an opportunity for places like Kentucky to play a broader role in gastrodiplomacy.

For example, it would be great to see state-level partnerships to help promote Louisiana’s Cajun cuisine, or good Southern cuisine from the likes South Carolina, Alabama or Mississippi. I would love to see the gastrodiplomacy promotion of the idiosyncrasies of American barbecue styles: dry and spicy in Texas; sweet, tangy and saucy in Kansas City; vinegar-based in the Carolinas. Or promotion of the subtle flavors of the Pacific Northwest found in cuisine from Oregon and Washington.

There is promise and potential with the Diplomatic Culinary Partnership initiative. To make it truly successful, it remains incumbent on middle America to understand that this is about communicating culture from all across America, and showcasing our diversity of cuisine. Getting a state-based buy-in would ultimately strengthen the initiative and make more of middle America realize their role in public, cultural and culinary diplomacy.