Home|The Collaboration between Russian Twerkers and Western Musicians: A Cultural Bridge in a Time of Crisis 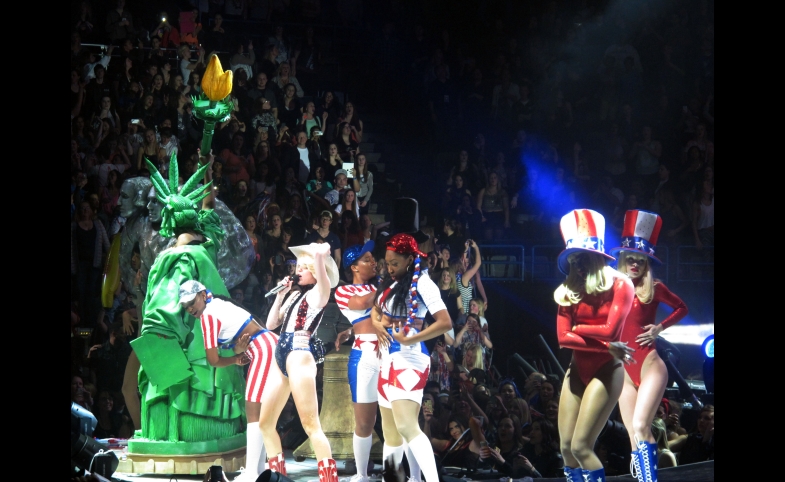 The Collaboration between Russian Twerkers and Western Musicians: A Cultural Bridge in a Time of Crisis

Russia may be on the brink of an economic meltdown. According to the World Bank, Russia’s economy will shrink by 0.7 percent in 2015. But, that’s based on crude averaging $78 a barrel in 2015. At $70 a barrel, the economy will shrink 1.5 percent. The problem is that Brent crude has fallen to less than $65 a barrel. With OPEC powerless to intervene, many predict the slide to continue - perhaps to as low as $50 in coming months.

To compound Moscow’s economic problems, the Russian ruble has fallen 40 percent against the U.S. dollar since the start of the year. This is despite five rate hikes by the Russian central bank that have moved the interest rate from 5.5 percent at the start of 2014 to 10.5 percent today. With the economy starting to spiral downward, investors are fleeing. Experts estimate that 100 to 160 billion U.S. dollars has been pulled out of the Russian market this year. And, it is likely that billions more will follow in 2015.

If the point of the West’s sanctions was to bring the Russian economy to its knees, it appears to be working. Just this week, Prime Minister Dmitry Medvedev admitted to the Russian media that the sanctions are seriously hurting Russia’s economy. Now, whether it’s the sanctions, the oil markets, or other factors that are the primary drivers of Russia’s economic woes remains a matter of debate. Nevertheless, some policymakers are willing to double down on more sanctions – now or in the future.

On the face of it, the success of Russian twerkers seems like a public diplomacy win for Russia. And, it is. After all, it’s Russian dancers whose videos are attracting a massive global following. But, public diplomacy is rarely a zero-sum game.

Given the current state of affairs, it is an interesting time for Russian public diplomacy in the West. So far, Moscow’s efforts have failed to convince the masses that they have been wrongfully accused of an act of aggression against Ukraine or that their military leadership is not culpable for the shoot down of a civilian airliner.

Still, one must give credit where credit is due. Say what you will about Western perceptions of the Russian economy, military, and government. On the twerking front, Russian dancers are certainly making a name for themselves. Just ask the Daily Mail, who warned, “Miley Cyrus and Beyonce better watch their step – they’ve got rivals nipping at their heels in the form of a group of dancers from Siberia who have become global twerking sensations.” Or TMZ, who ran the story, “Unknown Russian Twerker Wins Twerking,” with the editorial subtext, “Miley may be done twerking, but this unknown Russia twerker puts all white girls to shame with her serious skills.”

Now, it might be a little tongue-in-cheek to call twerking a strategic asset. Let’s just call it one of the most important dance fads of the last few years. Like it or not, twerking became a mainstream sensation when Miley Cyrus uploaded a video of herself twerking to Facebook. Soon, she was twerking it out with Robin Thicke at the MTV Video Music Awards in front of 10.1 million viewers. Cultural experts responded by recognizing the significance of twerking after that event. The editors even added "twerk" to the prestigious Oxford Dictionary last August. For the record, it’s defined as, “dance to popular music in a sexually provocative manner involving thrusting hip movements and a low, squatting stance.”

On the international twerking scene, some of the most popular dancers are Russian, including Yelena Yatkina and Katerina Shoshina. In fact, Yatkina’s internationally renowned Fraules Dancing Centre has been dubbed “Siberia’s greatest export.” To date, the center’s YouTube videos have garnered over 88 million views, including almost 50 million views for their video featuring Major Lazer’s “Watch Out for This.” For her part, Shoshina’s video for Hucci’s “House Party” has attracted almost 5 million views since it was posted two weeks ago.

On the face of it, the success of Russian twerkers seems like a public diplomacy win for Russia. And, it is. After all, it’s Russian dancers whose videos are attracting a massive global following. But, public diplomacy is rarely a zero-sum game. At a time when so many political, economic, and commercial bridges have been burned between Russia and the West, the latter needs to fall back on what remains in times of crisis. During the Cold War, it was, in part, the Beatles, Bob Dylan, and Rolling Stones. Now, it’s Snoop Dogg, Hucci, and Diplo. On this account, Russian twerking videos advance the public diplomacy interests of the West just as much as they do those of Russia. To suggest otherwise would be a mistake.