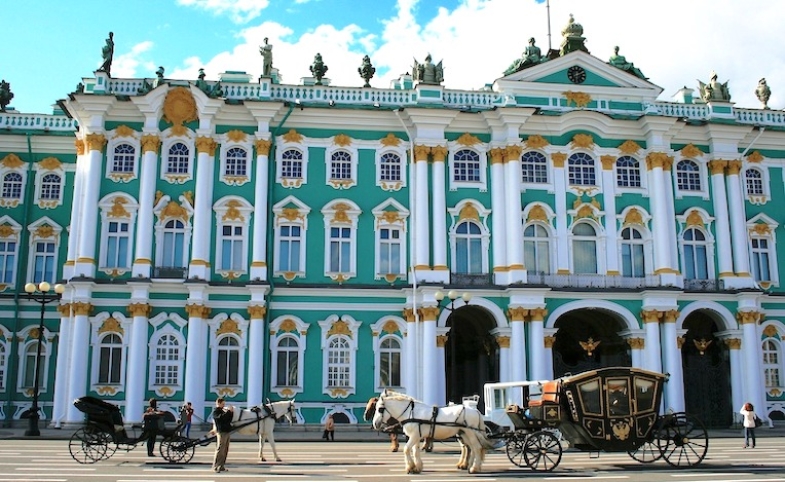 Note from the CPD Blog Manager: The article was originally written as part of the long-read on the history of Russian public diplomacy (in Russian language) for the Creative Diplomacy project.

Russian efforts to engage foreign target audiences have a centuries-long history. Since the times of Anna Yaroslavna, the Queen Consort of the Francs, the work of the most distinguished Russians has laid the foundation for shaping the Russian image abroad in the sphere that we would now call public diplomacy. Tsar Peter the Great took the best European practices to Russia, and his late successor, Empress Catherine the Great was in correspondence with the philosophers Rousseau and Voltaire. It was under her rule that we remember the 18th century case —the Russia-UK “Ochakovo crisis” of 1791.1 At this point in history, the Russian Empire and the United Kingdom were on the verge of war. According to Moscow State University Professor, Oxana Zakharova, it was the brilliant use of public diplomacy tools by Russian Ambassador Count Semyon Romanovich Vorontsov that enabled a change of public opinion from the British side,2 which postponed the war for almost sixty years. Russian diplomats, under the guidance of the Ambassador, published articles in the leading British newspapers. The Ambassadors was also actively working with British business circles who were interested in both trade growth and engaging in track II talks with Parliamentary opposition.

Although present day Russian tycoons create a mostly negative reaction towards their home country in the West, past Russian aristocrats were an integral part of the European elite (Ambassador Vorontsov’s grandson Sidney Herbert was British War secretary during the Crimean war). During foreign campaigns of the Russian army, its troops helped to restore European towns after the Napoleonic invasion. Through the use of what we would now call “development assistance,” Prince Nikolai Grigoryevich Repnin-Volkonsky Governor-General (Viceroy), until his replacement by the Prussian General Government, worked to stabilize and rebuild Saxony, and attempted to turn its capital of Dresden into the center of German art. Such examples are countless, some most outstanding examples include the activities of Colonel Nikolay Raevsky, prototype of Anna Karenina’s Vronsky, to raise agriculture in the Turkestan region and of Russian General Skobelev to restore Bulgarian infrastructure.

As for science direction, in the Russian Empire the members of foreign Royal families (for example, a friend of the famous Russian geographer Petr Petrovich Semenov-Tyan-Shansky, the Belgian king Leopold the Second, Turkish Sultan Abdul Hamid, Prince Albert) and well-known foreign researchers and geographers (Baron Ferdinand Richtgofen, Roald Amundsen, Fritiof Nansen and others) were elected to be honorary members of the Russian Geographical Society. It was positive for the image of the country among foreign decision-makers.

The work of capable Russians in the sphere that we would now call public diplomacy have shaped the country’s image.

The foreign members of the Imperial Academy of Sciences were brilliant writers and scholars of the 19th century: A.-M. Ampere, J.-L. Gay-Lussac, W. Herschel, J.V. Goethe, A. von Humboldt, C.R. Darwin, C. Lyell. This group of individuals testified to the high authority of not only the Academy, but also of Russian science as a whole. One of the first Russian humanitarian organizations was the Palestinian Committee (later the Imperial Orthodox Palestinian Society, IOPS). In addition to Russia’s humanitarian presence in the Middle East, it was also engaged in scientific direction.

The golden and silver age of Russian culture have also influenced foreign public opinion. Dostoyevsky, Turgenev, Chekhov and Tolstoy were the best Russian public and cultural diplomats. As it was told by Dostoevsky in his “Pushkin speech,” “The greatest of European poets could never so powerfully embody in themselves the genius of a foreign, even a neighboring, people, its spirit in all its hidden depth, and all its yearning after its appointed end, as Pushkin could…Our destiny is universality, won not by the sword, but by the strength of brotherhood and our fraternal aspiration to reunite mankind.”

The period of Revolution and Civil War (1917-1922) had a very dramatic impact on Russian history. The best representatives of Russian intelligentsia “white émigré” were forced to leave the country on the “philosophers’ ships.” Although it was a tragedy for the country, the first wave of Russian emigrants unwillingly became public diplomats of Russia. Most of them were “Russians,” even after becoming citizens of other countries. During the WWII period, some of them raised international aid for their fellow countrymen, who were suffering from the Nazi invasion, in order to help their “mother Russia.”

Like many other states, Russia was using its methods of attraction for centuries. Its public diplomacy tools were based on its imperial might, intellectual elites and enormous resources. Using a mainly “civilizing” rather than a colonialist approach towards its suburbs, Russia had laid a foundation for the later success of the Soviet Union in the struggle of ideas during the first years after its creation and in the process of its international recognition. The military might of the Russian Empire and its geographic scale caused fears among rival nations, creating the scary image of the “Russian bear.” Still, the grounds for Russia’s current attractiveness for foreign migrants traces back towards the centuries-long Russian tradition of inviting foreigners. According to Professor Irene Wu from the Wilson Center, “While it is well-known that the U.S. has a large immigrant community, it is less widely recognized that Russia is the second largest immigrant country in the world.”

The work of capable Russians in the sphere that we would now call public diplomacy have shaped the country’s image. Without knowing these roots, it’s impossible to analyze it meaningfully as the wider context is not presented.

1 During the Turkish-Russian War of 1787-1792, Britain wanted to maintain the continental balance of power, which it saw was being threatened by Russian gains in the war. Consequently it created the Triple Alliance in 1788 (Great Britain, Prussia and United Provinces) in an effort to counter the growing Russian influence.

The concept of “Russian World” (“Russkiy Mir”) started being used by Putin almost 20 years ago. The initially cultural and civilizational concept was introduced as a component of political rhetoric in 2001 when the newly...