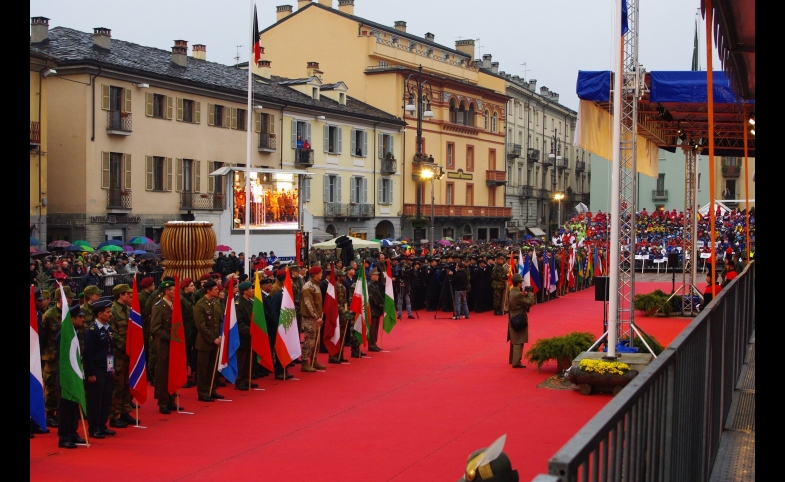 These days, many countries favor international cooperation. However,  according to Ian Bremmer, the world is largely at war, and many peaceful initiatives have been overtaken by direct military encounters.

What is needed is a better understanding of mutual perceptions and misperceptions, common threats, and international trends. Armed forces are key stakeholders this process, since military-to-military communication is quite important in a world with airstrikes in previously stable countries, millions of displaced persons, and the most serious migration crisis since World War II. This divided world would be better if there were platforms in place for a dialogue aimed at a better understanding between the armed forces who are working to make global security more interconnected.

And here, sport could come to our aid. As Nelson Mandela once said, “Sports have the power to change the world.” Since we are witnessing rising tensions worldwide, sports can be used as a means of solidarity when overcoming national and international enmity. According to the Special Adviser to the UN Secretary-General on Sport for Development and Peace, Mr. Wilfried Lemke, "Sport does not have the power to stop tanks, but is capable of bringing people together and can be an excellent platform to open up dialogue, unite people and build trust."

This divided world would be better if there were platforms in place for a dialogue aimed at a better understanding between the armed forces who are working to make global security more interconnected.

Not many people know of the nearly 70-year-old organization uniting the armed forces of 134 nations, known as the International Military Sports Council (Conseil International du Sport Militaire, CISM). CISM hosts the Military World Championships, Military World Summer, Winter Games, and Cadet Games. Thanks to this organization, officers and soldiers who may have previously met on the battlefield can meet again on playing fields. The military officers of tomorrow get a chance to communicate with one another in a friendly environment where they can share experiences. Not only do military athletes meet at these events, but also high-ranking chiefs of national delegations that represent armed forces of the CISM member states. Institutional events such as General Assemblies and continental meetings, clinics, and workshops aimed at developing cooperation are held every year in different parts of the world

The Republic of Korea is now hosting the 6th CISM Military World Games. Secretary General of the United Nations Mr. Ban Ki-Moon said in his welcoming address, "Sport is a universal language that unites people regardless of gender, ethnicity, social, cultural, political or religious differences or physical abilities. Sport promotes fairness, respect, tolerance, and peace in Korea and around the world. In bringing the militaries of the world together, this summer games can help advance mutual understanding and peace.” Hopefully his words will prove true and this opportunity for military-to-military communication will be used properly. Perhaps in the future it could lead to joint projects in different spheres and provide opportunities for rapprochement. Although greater collaboration is needed to put sport at the service of peace, CISM’s motto, "Friendship through Sport," enables us to work in this direction. Several projects with the International Olympic Committee and the United Nations, aimed at using sport as a development tool in conflict areas and a mechanism for positive change, are already being organized.

At the Sport for Peace Forum in Aosta, Italy, HRH Prince Albert II of Monaco said that sport can be at the long-term service of peace. Through the efforts of CISM, we see that thousands of people involved in military sports worldwide understand the importance of these words and realize what is at stake.

The PyeongChang Winter Olympics offered an opportunity for South Korea to present itself to the world and also served as an important platform for public diplomacy, given the regional instability. The Olympics' role in...