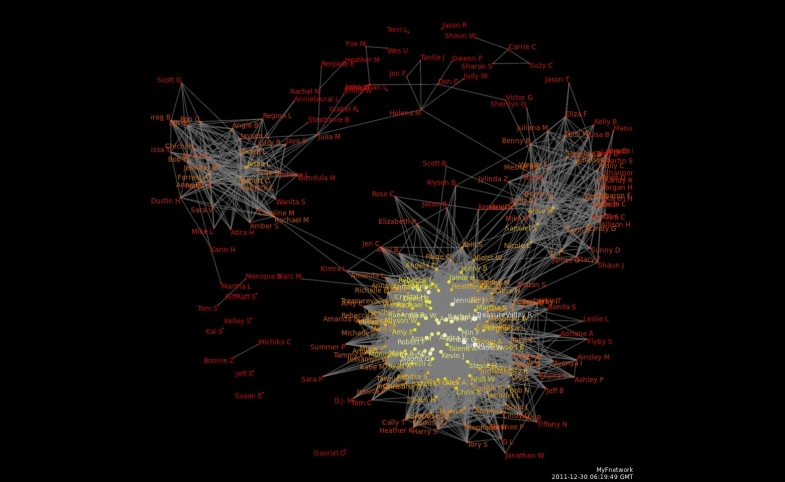 Diplomats and scholars now have the opportunity to gather and analyze vast quantities of data. Data has allowed us to explore how social media users responded differently to a variety of international broadcasters in the wake of the use of chemical weapons in Syria and the actions of conservative cyber-activists in Iran. Data science can empower diplomats to evaluate a season of programs from an international broadcaster, the coverage of a global summit about ending sexual violence, or develop more ways to leverage an international sport event such as the London 2012 Olympic games.

One way this data can be put to use is by creating three-dimensional network visualizations which can be viewed on a tablet. Another is to offer insight into the complex systems which make up the Jihadist Swarmcast (a dispersed network of social media accounts which provides resilience and persistence for jihadist content as part of a fully integrated multiplatform social media zeitgeist). This insight can empower public diplomats to develop strategies to challenge the media mujahedeen.

As highlighted by “Data-Driven Public Diplomacy,” published by the U.S. Advisory Commission on Public Diplomacy, it is becoming increasingly important for both the scholarship and practice of diplomacy to be able to integrate the insights available from data science. This will allow data analysis to be incorporated into the workflow, to be used in planning and program design, and be applied to the systematic understanding of the extent to which programs engage and influence foreign audiences.

It would be absurd to suggest that diplomacy should be conducted only on the basis of big data. However, it would be equally absurd to conduct public diplomacy without using big data when it is available. The greatest opportunity for influence comes from the visualization and synthesis of big data insights with the nuance, experience, and understanding developed by generations of diplomats.

What is Data Science?

“Data science requires skills ranging from traditional computer science to mathematics to art,” according to Mike Loukides. In his valuable An Introduction to Data Science, Jeffrey Stanton writes:

Data Science refers to an emerging area of work concerned with the collection, preparation, analysis, visualization, management, and preservation of large collections of information. Although the name Data Science seems to connect most strongly with areas such as databases and computer science, many different kinds of skills - including non-mathematical skills - are needed.

The potential of data science is to draw large data sets into the study and practice of diplomacy, and allow diplomats and scholars to become comfortable engaging with and analyzing increasingly large and often unstructured data. As Google Chief Economist Hal Varian claimed, “the ability to take data—to be able to understand it, to process it, to extract value from it, to visualize it, to communicate it—that’s going to be a hugely important skill in the next decades.”

The challenge of data science is often characterised by three Vs: volume, velocity, and variety – with the veracity of data being a common fourth ‘V’. This data can come from social media or other huge data sets, such as the quarter billion record database GDELT (Global Data on Events, Location, and Tone).

As team members are often significantly more familiar with one part of the project than the other, defining clear roles can help ensure that important aspects of research do not fall down the cracks between data specialists and subject matter experts.

Jeffrey Stanton’s “four A’s of data” are useful categories through which team members can identify the roles and responsibilities at each stage of a research project:

Laying out the responsibility at each stage of the project can help ensure that a data science approach can best contribute to greater understanding of public diplomacy based on questions developed in collaboration with subject matter experts. The table below is intended to be illustrative rather than exhaustive. 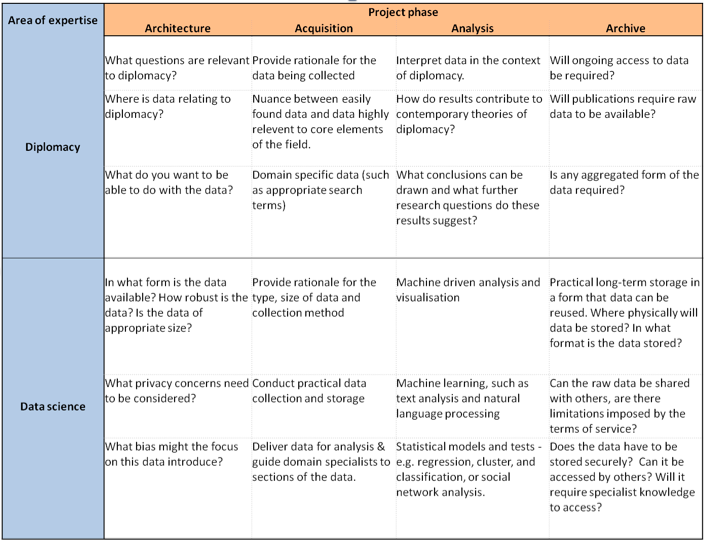 The availability of data is pushing the boundaries of what is imagined possible in public diplomacy. However, while tools to analyze data have expanded rapidly and users can now search large amounts of data quickly and efficiently, it is still up to subject matter experts to interpret the results and the public diplomats who bridge the last three feet to deliver results.

Combining big data analysis and visualizations with a nuanced understanding of context, already central to diplomacy, can create opportunities for collaboration and for pushing the boundaries of what is imagined possible...

What Does an AI Expert Teach to Diplomats?

Gale Lucas is a faculty member of CPD's professional training program, which includes CPD Summer Institute and CPD Mini-Courses. This feature was included in CPD's 2020–2021 Annual Report. View this and other...

Check out the most popular blogs, events, and PD Hub features for the month of August: PD HUB 6. Evaluating Data-Driven Public Diplomacy  Authors Hamilton Bean and Edward Comor try to identify what...