Home|Eye of the Swarm: The Rise of ISIS and the Media Mujahedeen 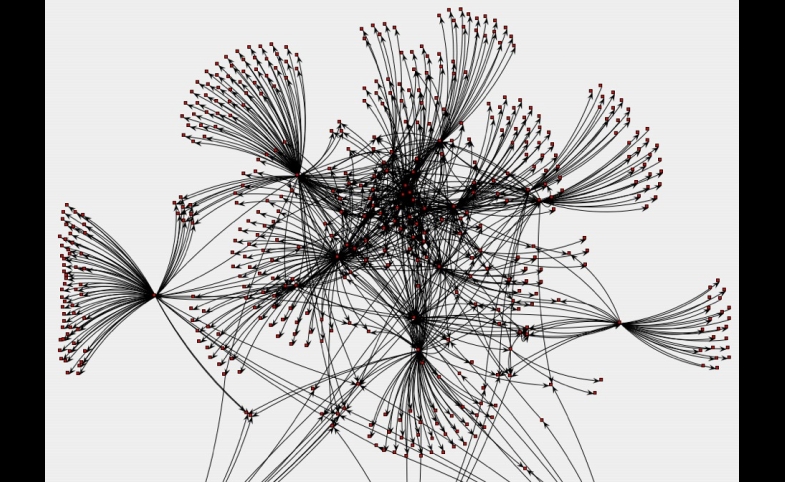 As ISIS make gains in Iraq and declare an Islamic caliphate, media activists embedded along the front lines and their global support networks, the media mujahedeen, valorize their achievements in HD video and Hollywood film style posters which are distributed via social media. Their approach is one of the clearest incarnations of Netwar since it was first envisaged. The public diplomacy and cultural relations organisations mandated to counter violent extremism require strategies based on network concepts to counter it.

ISIS use dispersed forms of network organization and strategy to disseminate rich audiovisual content from the battlefield in near real-time. They disseminate content through an interconnected network that is constantly reconfiguring, akin to the way a swarm of bees or flock of birds constantly reorganizes in flight. It marks a shift from the hierarchical and broadcast models of communication during conflict to a new dispersed and resilient form, the user curated ‘swarmcast.’

Much has been made of the ISIS twitter app The Dawn of Glad Tidings (Fajr al-basha’ir). However, the data from two recent hashtags on Twitter indicates that the app is only a small part of the much wider approach through which the media mujahedeen has been able to ensure their propaganda has a persistent online presence.

The twitter data ultimately emphasizes the existence of a ‘swarmcast’ and the importance of the relationships created by the users behind the screens rather than the headline grabbing technological gadgetry.

Use of specific tags

The social media content produced by ISIS, similar to other jihadist groups, has two strands: one to reach a mass audience to inspire mass mobilization, and the other to galvanize the vanguard. In both cases hashtags are often short-lived. This is because hashtags frequently reference specific events or content intended to build toward a mass public show of support on a specific date.

#AllEyesOnISIS, for example, aims at garnering support from a mainly English audience, although there is a large amount of content in Arabic material. The second tag (#حملة_المليار_مسلم_لنصرة_الدولة_الإسلامية) translates to “#The Campaign of a Billion Muslims to Support the Islamic State”. This tag seeks to gain momentum for ISIS within the Arab-Islamic neighboring countries and was the more heavily used of the two tags.

Data on the content of these tweets show they contain a range of other tags specific to ISIS, including #ISIS and encouragement to ‘#Live_the_Cause.’

Jihadi media activists and planners, however, are keen to spread their content to a global audience. To do this, ISIS and Syrian rivals Jahbat al-Nusra (JN), attempt to co-opt trending or popular tags to increase the reach of their message. 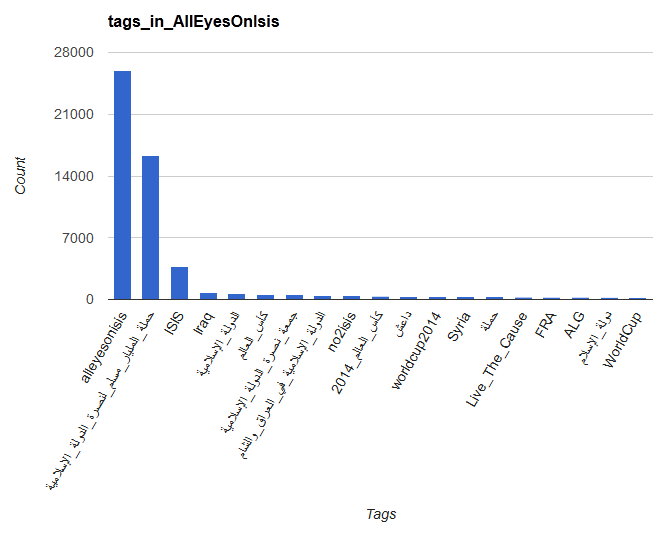 The data on #AllEyesOnISIS shows ISIS supporters combining the specific tags with reference to the FIFA World Cup, in both Arabic and English. These hashtags are used in hard-core jihadist tweets with the intention of widening their audience and influence. However, supporters of ISIS do not have it all their own way. Those opposed to ISIS use #NO2ISIS alongside #AllEyesOnISIS to inject anti-ISIS messages into the stream of ISIS-inspired content.

The buzz about the ISIS app belies the importance of the human connections that facilitate a persistent jihadist online presence.

Each tweet is encoded with the service that was used to author that tweet. Data on both #AllEyesOnISIS and #حملة_المليار_مسلم_لنصرة_الدولة_الإسلامية, show that the majority of tweets were produced by mainstream apps and services. This indicates that most of tweets are created by humans not bots and further highlights that ISIS is fighting the social media war with mobile technology.

Despite the technological aspect social media, the transfer of information is socially mediated; information flows predominantly through the relationships between humans. Interaction on Twitter, such as retweets and @mentions, can be represented on a network graph (see headline image).

The network coordinates around a few prominent accounts and a greater number of less influential users. These accounts are frequently interconnected, either directly or through a mutually shared connection. This means that the suspension of a few important accounts has little impact on the flow of information through the network as a whole.

Equally, the network data shows that in this case the increased reach on Twitter had only limited impact for ISIS and their supporters. The often rehearsed logic is that if ISIS supporters can make a hashtag trend, this extends the reach of ISIS content and even increases the number of retweets. If getting greater numbers of retweets is the object of ISIS strategy, this works.

However, the stated goal of many Jihadist groups is to inspire and attract people to the cause. In this data the increased reach did not attract users to engage with, or retweet, more radical or hardcore jihadist twitter content if they had not done so previously.

In fact, 99.6% of users in this data that retweeted @Activehashtags, an account that tweets trending hashtags, had already engaged in at least one of the following:

While the release of a new gadget or a surge in tweets grab the headlines, it is the underlying dispersed network which provides the ISIS social media effort with both resilience and the ability to rapidly disseminate content. As John Arquilla put it; Swarming Is the New Surging and the rise of ISIS, backed by a global network of media mujahedeen, could be the clearest incarnation of Netwar since it was first envisaged.

Those responsible for conducting public diplomacy to counter Jihadist material need to factor into their strategy that the media mujahedeen, and ISIS supporters specifically, distribute content through a dispersed network of Twitter accounts as part of a fully integrated multiplatform social media zeitgeist, similar to that identified in an earlier study of ISIS’s rivals Jahbat al-Nusra. This gives ISIS a persistent online presence through a mobile technology enabled swarm that is able to rapidly reconfigure after any attempt to target a few key individuals.

This article was co-written with Nico Prucha.