In reading through various reports from Davos last week, I couldn’t help but wonder with all that power amassed – over 4500 attendees to include hundreds of heads of state and CEOs – and all the current crises compounding on the world’s stage, might something different result. Would there be any fresh thinking or radical action to come of such a gathering at such an auspicious time in world history. Though official remarks gave courtesy to the World Economic Forum’s Global Risk Index which lists some 50 threats each with greater and graver consequences than the next, it was apparent that the gathering was as it has always been a place to see and be seen, but do nothing. As 2012 lurches forward and the global economic system continues its dismal spiral most of us around the world are focused inward on issues affecting our daily lives and those of each of our respective nations. If the protests occurring in every region are any indication, people have given up hope that those in power – regardless of which sector they operate in – will find a way to come together to solve global challenges. Additionally, trust in global institutions and governments continues to deteriorate as each are crippled to varying degrees by their bureaucracies, protocols, and old ways of thinking and responding to crisis. If there were ever a time for new leadership on the world stage, and a radical new approach to global engagement, it is now.

I would also argue that the sector most poised to step up and take on such a leadership position – especially in light of the numerous political transitions that will occur in 2012 -- is the private sector. Wall Street aside, the private sector knows how to bring people together and develop solutions. Business has experience managing risk, responding to crisis, and working across multiple cultures effectively irrespective of political differences. Business sees opportunity when paralysis sets in. Bottom line, business has the resources and reach to take action – who else or what else is better positioned?

Reading through the WEF Global Risk Index in its entirety is an exercise in extreme patience and fortitude. Though beautifully organized with video links and additional resources, one is tempted at multiple points – particularly when the risks start clustering and spreading into pandemic proportions -- to surrender. With each risk detailed in the nearly 100 page report, each more harrowing than the next, one can easily surmise that there isn’t much any one of us or our governments can do about it. And here is a classic example where the approach has defeated the purpose. Conversely, look at Ian Bremmer’s outline of Top Risks for 2012. Bremmer, noted geopolitical risk guru who also attended Davos, gets right to the point in 11 pages with one of the most succinct, easily digestible analyses of the global risk environment. He doesn’t attempt to boil the ocean or drown you in every possible disaster scenario; rather he provides a roadmap of Red Herrings paired with easily digestible content and context. If you follow Bremmer’s blogs, listen to any of his video clips, or read his books – which should be required reading for any global leader – you learn quickly that while others pride themselves in over complicating issues of global import, he is all about distilling down the essential elements and making them easily understood so decision makers can use the information and move forward. A mindset and approach I dearly wish more global event planners would adopt. 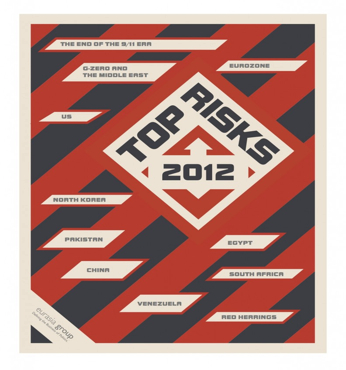 Many of the risks detailed above and in the WEF Global Risk Index overlap and blur public-private boundaries and tidy geopolitical demarcations. It is clear that with rising uncertainty and power shifting to non-state and regional actors, a coordinated, strategic tri-sector approach is needed. The private sector in partnership with governments and NGOs must come together to develop a strategic response tailored to their area of engagement and expertise. To do this however requires all involved to hone new skillsets – a tri-sector skillset where one can move seamlessly and effectively among the public and private sectors. In speaking with corporate diplomats who are on the front lines of many of these risks on a daily basis, reacting and responding to each of these risks in turn is something many do on a daily basis. To be effective, they must develop strong relationships with influential government and NGO leadership – learn to speak their language – and find creative ways to come together to develop solutions. Further, more and more corporate diplomats are seeking public diplomacy expertise to build off of and better leverage their soft and smart power arsenals. Much of this activity is never reported in the press nor is it something companies seek recognition for as it is seen as an essential part of doing business globally. Recognizing the need for these skillsets and placing a premium on their value to any organization, public or private is one step in developing a new strategy for global engagement and risk response.

I am hopeful that next year Davos might see a radical new kind of leadership emerge, one that clearly outlines a path for collective action and driving change rather than just responding. Leadership that champions a new strategy for tri-sector engagement to manage and mitigate the multitude of compounding global risks– one that builds off of the strengths of governments, global institutions, and NGOs. And then just get on with it.