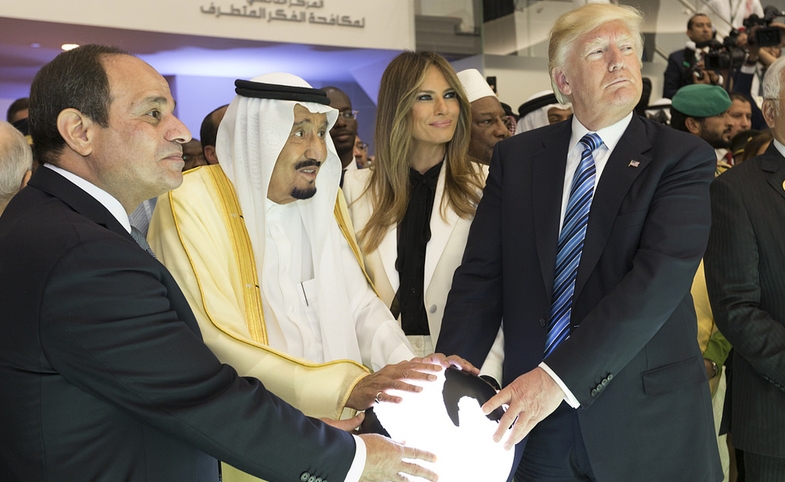 KYIV, UKRAINE - Donald J. Trump’s first foreign trip as U.S. President is now history, but the repercussions are likely to be felt for years to come. A huge sale of U.S. weapons — $350 billion — to Saudi Arabia cemented a strategic relationship with the royal families of the Gulf States. Along with Trump’s public comments, which passed over any reference to democracy, human rights, or pluralism, this first part of his nine-day trip made plain that the Trump Administration will support any government in the Middle East that promises to fight jihadists and oppose Iran.

As worrisome as this stance may be to those who value the importance of public opinion and equal rights, it was the last part of the Trump road trip — to Europe — that caused even more concern.

Trump disrespected the entire NATO alliance system, broke with the rest of the G-7 on the Paris climate change agreement and, in general, behaved boorishly.

Given the chance to welcome NATO’s newest member, Montenegro, Trump pushed its prime minister aside to claim his own front row spot for the traditional “family photo” of NATO summit leaders. Since the event was a photo op, international media captured the scene and repeated it for the world to see.

Given the opportunity to express solidarity of commitment to mutual defense, Trump ignored any reference to Article 5 obligations and instead chastised the NATO heads of government — again, in front of cameras — for failing to meet defense spending targets.

He pronounced Germany “very bad” for its success in exporting automobiles to the United States, betraying an ignorance of EU trade policies and a disregard for consumer choice. German media were incredulous.

The reality of this awful disruption of U.S.-European relations was only underscored after Air Force One took off from Sigonella, Sicily, last Saturday to return to Washington, D.C. The next day, German Chancellor Angela Merkel carefully but forcefully told an audience in Bavaria that Europe could no longer rely on others but now had to look after its own affairs. So great was the umbrage taken that even Martin Schulz, Merkel’s SPD challenger in the coming German elections, called Trump’s behavior toward her “unacceptable.” The Washington Post, reporting from Germany, found that:

Germans…wonder why the leader of Germany's most influential international ally seems more willing to criticize their country than nations with questionable human rights records.

“Europeans think they are now being treated worse by Trump than countries like Russia or Saudi Arabia,” said Stephan Bierling, an expert on transatlantic relations at the University of Regensburg in Germany.

Meanwhile, at Versailles, French President Macron, looking young and vigorous, welcomed Putin with a mastery of public gesture and comment that seemed to make Putin uncomfortable. “Organs of influence” — propaganda, not journalism — was Macron’s bold but accurate characterization of the Russian state-owned media outlets Sputnik and RT.

As Vox put it:

Macron basically sideswiped Putin with a live television takedown at an event that was originally billed as a reset for testy Franco-Russian relations. Macron bashed Russia’s use of fake news, criticized the country’s abysmal human rights record, and said he'd no longer stand by as Russia’s allies in Damascus used chemical weapons against Syrian civilians.

The press reacted as if he’d all but ripped open his suit and revealed a superhero costume, cape included.

By contrast, Anne Applebaum, The Washington Post’s astute observer of international relations, described Trump in Europe: “At no point did president [Trump] seem to understand his role of alliance leader…[nor] the issues at stake….As a result of this trip, American influence, always exercised in Europe through mutually beneficial trade and military alliances, is at its rockiest in recent memory.”

Richard Haass, President of the Council on Foreign Relations, tweeted: "Merkel saying Europe cannot rely on others & needs to take matters into its own hands is a watershed-& what US has sought to avoid since WW2.”

Even if this perception softens over time, we would be foolish to ignore the immediate impact of President Trump’s statements, behavior, and decisions on attitudes toward the United States. The United States will be seen as unreliable abroad and divided at home, led by a President enmeshed in scandal, conflicts of interest, and a chaotic management style. How can countries turn to the United States on issues of diplomacy and international relations when the U.S. President seems intent on breaking the State Department through budget cuts and leaving important positions unfilled? How can the U.S. enjoy high regard in the world when President Trump shouts “America First” while slashing foreign assistance budgets?

There are already numerous examples of the deterioration of America’s position — small and not so small. The New York Times contrasted the conduct of U.S. and Russian public diplomacy in Italy in this article entitled “With Italy No Longer in U.S. Focus, Russia Swoops to Fill the Void.”

Here in Ukraine, where I recently attended the Lviv Media Forum, an important venue for supporting press freedom, the young aspiring journalists heard words of welcome from EU and U.S. government, two of the sponsors. “You can count on the unwavering support of the EU,” said the EU official, while the American offered a more muted “pleased to support” remark, noting that “fake news” was a common challenge.

Indeed, the White House today is pushing back against all the assessments noted above, insisting — against all evidence to the contrary — that the President’s travel was “incredible, historic, unprecedented, showing how quickly the president is acting to strengthen alliances...and rebuild America’s standing in the world.” Press Secretary Sean Spicer called the President’s relationship with Merkel “fairly unbelievable [sic!].”

Time will tell which view of the Trump trip is more accurate — that of nearly all media and commentators, or that of beleaguered Sean Spicer. (After all the press has been through with this President, they may rightly feel that they are themselves under assault.)

Similarly, I will not speculate on the future of the Trump presidency or the outcome of the investigations of Russian ties to his campaign last year. However, if Moscow’s goal was to undermine U.S. leadership and sow doubt about America’s intentions, it has clearly succeeded.