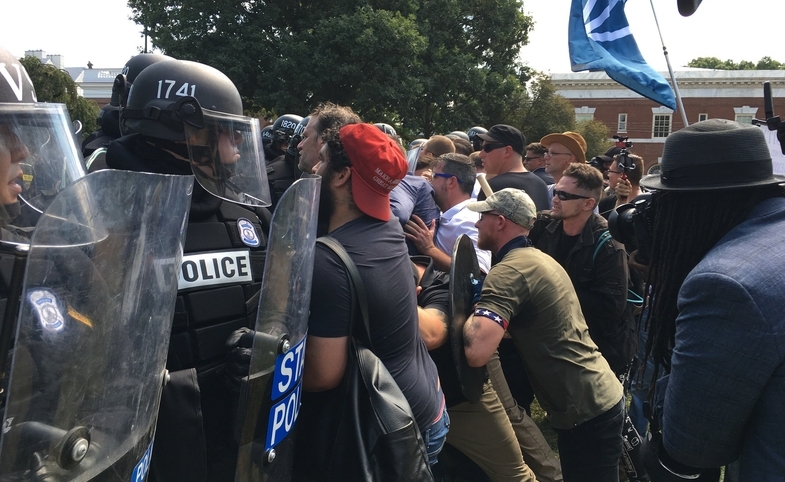 It is hard to do anything but recoil in horror at the thought that racists and Nazis would stage a parade through the center of one of our most distinguished centers of learning. But march they did last weekend, and the violent result in Charlottesville, Virginia has occupied our national discourse ever since.

What does it mean for America — for our society and ideals? How will it affect the way the world sees us — and the way we see ourselves?

When Charlottesville happened, I had been thinking intently about Detroit, a new film by Kathryn Bigelow concerning the riots that took place in Detroit in July 1967. I was a kid living in Detroit at that time and my memories of those days are vivid but complicated. Through her documentary-style filmmaking, Bigelow had given me another perspective on what had happened in Detroit 50 years ago, but also had driven home to me how vulnerable African-Americans may feel today. The notorious cases of police violence in recent years are as much the subject of the film as are the murky circumstances surrounding the murders at Detroit’s Algiers Motel.

After seeing Detroit, I was pondering whether our national leaders had failed us or whether we had empowered them to promote injustice against our fellow citizens.

After seeing Charlottesville — look at Vice News’ coverage on YouTube if you haven’t already — the answer is painfully clear. For some elected Republican officials, foremost among them Donald J. Trump, the racists and Nazis are part of their “base,” and therefore cannot be singled out for condemnation, lest they stay away from the polls next year. That is why President Trump vociferously returned on Tuesday to equate the alt-right provocateurs with those who stood against them.

In other words, these politicians need the votes of those who march with Confederate flags and Nazi swastikas, holding torches to emulate KKK nighttime rallies and Nuremburg marches. In national elections, the United States is nearly evenly divided and, for some Republican candidates, losing even a small percentage of their support will cost them dearly.

It is true that President Trump’s standing at home and abroad continues to drop and after his latest outburst some Republicans have parted company with him. John McCain, Paul Ryan, and others are openly taking issue with the President’s behavior. Leading CEOs are deserting his manufacturing council. The Republican opposition to Trump is likely to grow.

But, sadly, the problem is bigger than Trump. And the problem is not just in the states of the Old South. A recent study of Google searches showed that the most racist language came not from the South, but from rural Western Pennsylvania and rural Michigan. In the elections I remember from Michigan in the late 1960s and early 1970s, segregationist and former Alabama Governor George C. Wallace did very well — winning the Michigan state Democratic presidential primary in 1972. The alleged driver of the car that rammed into the “anti-fascist” demonstrators protesting the racist and Nazi demonstrators comes from Ohio, not the South. How much has changed?

America does not have a regional problem, it has a national one. It is less about which statues stay up in the South than which prejudices fall nationwide. And that will, in turn, determine how we deserve to be seen in the world.

Photo by Evan Nesterak I CC BY 2.0

Re-Thinking Social Engagement Strategies in the Age of Trump

Whether you are an executive working for an American multinational company, university, or NGO, or a diplomat serving in our embassies and missions abroad, in the age of President Trump we need to all radically rethink and...