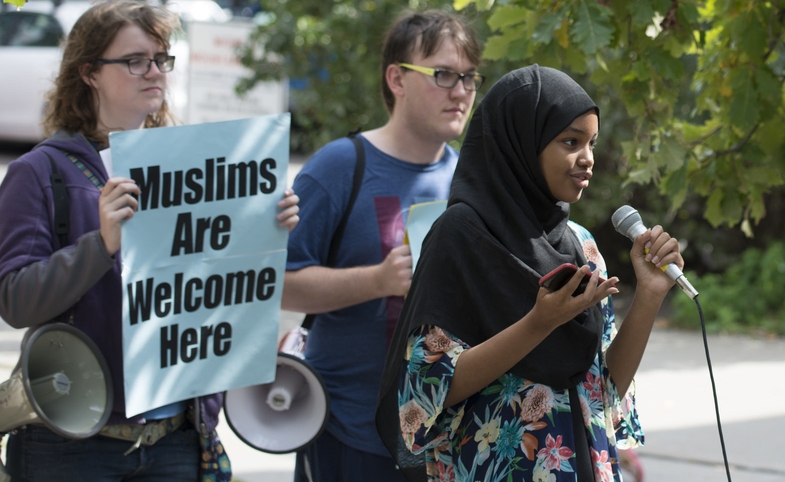 Six years ago, a prominent British Muslim politician, Lady Sayeeda Warsi, argued that Islamophobia in Britain had passed the “dinner table test.” Never has this rung truer than today, for Britain and other Western societies. A variety of factors, most prominently Islamic State-directed or inspired attacks in Western countries, and their cynical exploitation by populist politicians from the United Kingdom to France to the Netherlands to the United States has led to a new surge of anti-Muslim sentiment that features not only in far-right political platforms, but indeed in mainstream discourse and the media. Moreover, a growing social media space has expanded opportunities to spread anti-Islamic sentiment.

In the U.S., there has been a continued erosion in how Americans see their fellow Muslim citizens. Favorable attitudes toward Muslims have continued to decline, from 35% in 2010 to 27% in 2014. While favorability rose overall by 2016, this was mostly due to political polarization. Only 16 percent of Trump supporters in 2016 saw Muslims favorably. Acts of anti-Muslim bias, including destruction of mosques, violence against Muslims, and other hate crimes, are also on the increase.

Expressions of anti-Muslim prejudice at home have a direct effect on how Muslims around the world see the United States. This new wave of American Islamophobia has made the job of U.S. public diplomacy in Muslim-majority countries, never an easy task, even more challenging. Before, American Islamophobia existed largely outside the sphere of official rhetoric. While President George W. Bush’s policies were widely perceived to be biased against Muslims and his administration tended to view Muslim identity in simplistic terms, Bush himself made a genuine effort to condemn prejudice against Muslims, most prominently in the wake of the 9/11 attacks, even visiting a mosque. And his democracy agenda, however flawed, was at least based on the argument that Muslims and Arabs are no less deserving of democratic governance than others, thereby countering the deeply-rooted and deterministic narrative of Islam’s incompatibility with democracy and human rights.

President Obama was determined to reach out to Muslims in the U.S. and around the world, from his thoughtful 2009 Cairo speech to his well-regarded visit to a mosque in the U.S. Yet even he was criticized for fearing the political repercussions of a more open embrace of his Muslim supporters and his father’s Muslim heritage, and for delaying the U.S. mosque visit until late into his presidency.

There was certainly no shortage of anti-Islamic sentiment in public discourse and on media outlets like Fox News and Breitbart News in the Bush and Obama eras, but at the very least U.S. presidents spoke the language of tolerance and acceptance, avoiding terminology like “Islamic extremism.” Yet, U.S. diplomats could point to the fact that the most egregious expressions of Islamophobia—such as the Koran-burning pastor in Florida or the anti-Islamic “film” that led to mass protests and attacks on U.S. embassies in 2012—were the work of a fringe that the U.S. government had no control over and in fact strongly condemned (although many Muslims, especially those living in countries where there is strict government control over the media, believe that the U.S. government is behind such instances of anti-Muslim bias).

How can U.S. public diplomacy, which for years has sought to portray the U.S. as respectful of Islam (while condemning extremism), maintain any credibility given what appears to be an openly Islamophobic administration?

Everything has changed in the age of President Donald J. Trump. Not only did Trump openly espouse Islamophobia on the campaign trail, since taking office he has proposed and pursued policies that demonize Muslims. Trump and his surrogates have openly questioned the loyalties of Muslim-Americans. There are known Islamophobes in the White House, most notably Sebastian Gorka. Breaking with decades of tradition, there was no Iftar held at the White House this Ramadan, nor did Secretary Rex Tillerson host one at the State Department. Trump has made a point to employ the term “Islamic extremism,” despite the counsel of his foreign policy advisors.

All of this makes the job of U.S. diplomats engaging publics in Muslim countries, already difficult, immeasurably harder.

How can U.S. public diplomacy, which for years has sought to portray the U.S. as respectful of Islam (while condemning extremism), maintain any credibility given what appears to be an openly Islamophobic administration? How can efforts to communicate with and engage Arab and Muslim publics work in the age of Trump?

There are no easy answers. All U.S. diplomats must tread carefully so as not to seem disloyal to an administration and its agenda. They cannot openly disavow or distance themselves from a President’s statements. It would have been easier if the worst rhetoric was limited to a campaign (after all, that can be explained as an unfortunate reality of electoral politics), but that is not the case.

Nevertheless, here are some thoughts on strategies for U.S. messaging and engagement in the Islamic world, and the Middle East in particular.

First, it is important to remember that while Muslims around the world are sensitive to how America treats its Muslim citizens, in the end they care more about the content of U.S. foreign policy. This was shown in George W. Bush’s failure to win hearts and minds in the Muslim world through a public diplomacy campaign that emphasized how happy Muslims are living in the United States. (It didn’t help that many American Muslims in fact experienced discrimination and immigration difficulties in the wake of 9/11). In the complicated mess that the Middle East in particular finds itself in at present, perceptions of U.S. policy often have to do more with where an individual stands on the Syrian civil war or the Saudi/Emirati/Egyptian vs. Turkey/Qatar rivalry, for instance. And there are the long-term, structural determinants of views of the U.S., such as America’s policy toward Israel. There has always been an American credibility gap in the eyes of many Muslims, and that gap has long predated Trump.

Second, the U.S. is fighting the good fight against the Islamic State, spending billions on military operations and hundreds of millions on humanitarian aid to help those displaced by ISIL. The vast majority of Muslims abhor ISIL, and Muslims have been its primary victims. The central U.S. role in the war on ISIL, and its partnership with Iraq and other Muslim countries, should continue to be played up, as it has up to now, and perhaps played up more and in new ways.

Third, the vast majority of Muslims also abhor the crimes of Syrian President Bashar al-Assad, and what appears to be a more muscular approach against Assad on the part of the Trump administration is something that can underscored in U.S. messaging, especially if the U.S. steps up pressure on the Damascus regime too.

Fourth, while American policy around the world matters much more as a determinant of attitudes toward the U.S. than how Muslims live or are treated in the U.S., it is still helpful to remind foreign publics that even in the age of Trump, Muslim citizens of the U.S. benefit from the freedom to worship their faith (or to be secular or agnostic, as the case may be), and are a successful and well-integrated segment of American society.

Fifth, while much damage to the U.S. image has already been done in the Muslim world under the Trump presidency, damage that will take years to undo, there are also daily and powerful demonstrations of the resilience of U.S. democratic institutions and the endurance of tolerance and diversity in American society. Judicial resistance to Trump’s attempts to ban citizens from certain Muslim countries should be highlighted as a testament to the balance of powers inherent in the American system. And the heartwarming response of countless ordinary Americans condemning attacks on mosques and Muslims also should be widely amplified by U.S. public diplomats working in Muslim countries.

Finally, U.S. diplomats should not forget that people-to-people engagement—through diplomatic outreach and exchange programs—remain one of the most effective ways to remind Muslims publics around the world that despite the divisive Islamophobia that has emerged from the highest place of American power, most ordinary Americans remain committed to core values such as diversity, tolerance, and inclusiveness.

Photo by Fibonacci Blue I CC BY 2.0

Philip J. (P.J.) Crowley is a Professor of Practice and Distinguished Fellow at the Institute for Public Diplomacy and Global Communication at The George Washington University. He served as Assistant Secretary of State for...