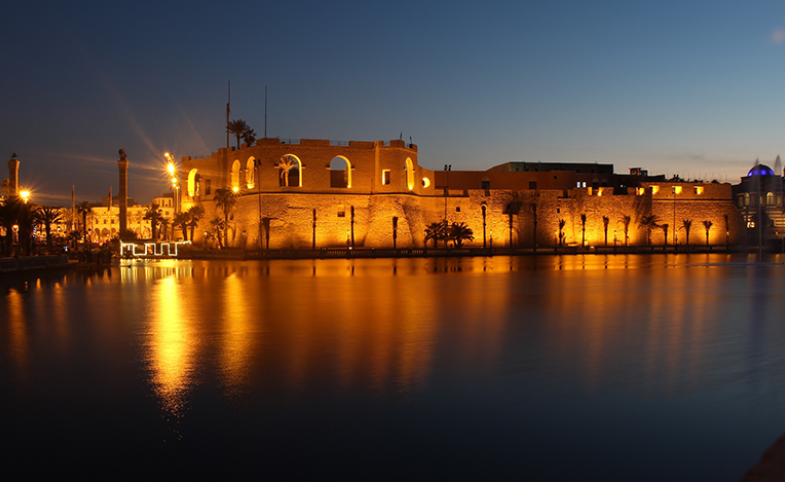 A new interim unity government was recently installed in Libya, a country that has experienced division and conflict for nearly a decade. Among the ministers in that new government is Najla al-Mangoush, Libya’s first female foreign minister. Najla also happens to be a former Fulbright scholar who received a master's degree in Conflict Transformation from the Center for Justice and Peace-building at Eastern Mennonite University in Harrisonburg, Virginia in 2015. Najla’s trajectory from Fulbright to foreign minister is but one of countless similar stories of former exchange participants who bring their U.S. experience and networks to positions of influence, thereby demonstrating the power of international exchange.

I follow Libya closely because I lived there in my former career. In 2012, I arrived in Tripoli, Libya as the newly minted Public Affairs Officer at the U.S. Embassy. It was an extraordinary time to be an American diplomat in Libya. Muammar Qadhafi, who had ruled Libya with an iron fist for over four decades, had been overthrown the previous year by a popular rebellion catalyzed by the Arab Spring. There was widespread euphoria among Libyans as they prepared to vote in the first free elections held since the 1960s. Libyans, moreover, were grateful to the U.S. for its support of the February 17, 2011 revolution.

The Obama administration was keen to seize on this reservoir of goodwill and build people-to-people ties between Libyans and Americans, linkages that had been disrupted while the U.S. and Libya had severed diplomatic relations in the 1980s and 1990s. The focus on public diplomacy was in line with the administration’s desire to avoid any military commitments in Libya: “No boots on the ground,” was the mantra.

I benefitted from the broad support and interest from the White House, State Department and other parts of the U.S. government. Most importantly, I had a boss—Ambassador J. Christopher Stevens—who was deeply committed to cultural and educational exchange. I remember vividly one meeting between Ambassador Stevens and senior administrators at Tripoli University, where we discussed potential partnerships between Libyan and U.S. universities. Though the meeting was scheduled for only an hour, Ambassador Stevens stuck around for three, drinking coffee and getting to know our interlocutors. Stevens was a public diplomacy officer’s dream ambassador.

In countries such as Libya, where linkages with the U.S. are still limited, exchanges are an especially important tool of public diplomacy.

One of the programs I was privileged to oversee was Fulbright, one of the oldest and most prestigious U.S. government exchange programs. Founded in 1946 by Senator J. William Fulbright, the program provides approximately 8,000 grants annually: roughly 1,600 to U.S. students, 1,200 to U.S. scholars, 4,000 to foreign students, 900 to foreign visiting scholars and several hundred more to teachers and professionals.

In the summer of 2012, we began our recruitment process for the following year’s Libyan fellows. But just as we were preparing to interview finalist candidates, tragedy struck: our embassy office in Benghazi was targeted in an attack in which Ambassador Stevens was killed along with three other American officials. The effect on U.S. public diplomacy in Libya was immediate, and chilling. With the passing of Ambassador Stevens, I lost a great champion of the people-to-people efforts in which I was engaged. Meanwhile, a politically-motivated series of investigations by Congress into the Benghazi attacks helped shape a zero-risk mentality among executive branch officials, and U.S. public diplomacy in Libya as a priority quickly fell by the wayside. Many programs were cancelled. However, one program I was determined to keep alive was Fulbright. It led to a bracing bureaucratic battle, with one superior asking me why I would want to send Libyans to the U.S. on exchange after they killed our ambassador.

In the end, cooler heads prevailed, and we retained the Fulbright program—and even managed to do in-person interviews for our finalists. Among the candidates we interviewed—and ultimately selected—was a brilliant young woman named Najla al-Mangoush, a civil society activist who was applying to study transitional justice in the U.S. as a Fulbright scholar. As a former public diplomacy practitioner, it was thus with enormous satisfaction that I read the news about Najla becoming the first female foreign minister. The fact that Najla is not a career politician, but rather an expert on transitional justice processes—which are much-needed but in short supply in today’s Libya—also bodes well for her tenure as Libya’s chief diplomat.

My association with Fulbright goes deeper and broader than just Libya and Najla. I serve on a committee at my current institution, Pomona College, which advises students on their Fulbright applications. I was a Fulbrighter myself, in Croatia. My sister was a Fulbrighter in Poland. My family originally arrived in the U.S. because my father was a Fulbright scholar from Poland. So I do not need to be convinced of the power of international exchange. But those who fund the Fulbright program—notably, Congress, which funds the program through an annual appropriation to the State Department’s Bureau of Educational and Cultural Affairs—often do need to be reminded of why U.S.-sponsored international education exchange programs matter. They are a relatively small investment for a lasting benefit.

I sincerely hope that there will be robust support for international exchanges under this Congress and among the Biden administration’s public diplomacy team, one that is commensurate with the focus on fighting state-sponsored disinformation. In countries such as Libya, where linkages with the U.S. are still limited, exchanges are an especially important tool of public diplomacy.

For a relatively small investment, lifelong friendships, networks and collaborations are forged, and future leaders like Najla are influenced—and simultaneously influence others. And at a time when foreign student numbers in the U.S. have fallen steeply and many Americans have faced their own country’s shortcomings—while positive views of the U.S. abroad have declined—exchanges are arguably even more vital as a way for outsiders to get a complete picture of the U.S.

For U.S. exchange participants going overseas, it is an opportunity to tell the story of American democratic resilience abroad—but maybe to bring back some lessons, too.

The latest issue of CPD Perspectives on Public Diplomacy this year is an article by CPD Research Fellow Mieczysław (Mietek) P. Boduszyński. "Public Diplomacy and the American Fortress Embassy: Balancing...