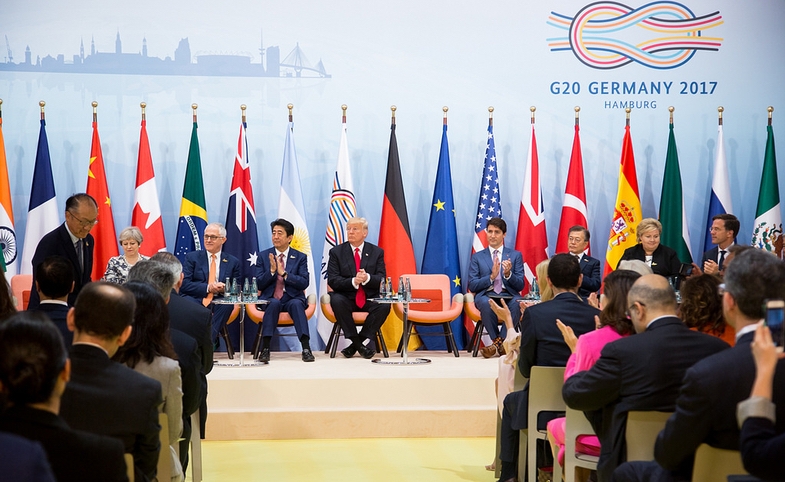 The immediate reactions to last week’s G20 summit focused on the isolation of Donald Trump and particularly the 19+1 communique. But they have missed the deeper points: the bifurcation of international relations and who, if anyone, can fill the shoes of the U.S. The actual G20 communique is, of course, of little importance in itself. These documents are confected in such a way as to include everyone’s pet themes, but in such a way as to cause no offense. Countries sign them with little if any intention to carry through the commitments (e.g. Russia on climate change, China on education). The document’s shelf life is so short that no one notices. Which makes it all the more surprising Trump couldn’t find a meaningless form of words to sign up to.

Turning to more the more significant aspects, there were two very different kinds of activities going on at the summit. On the one hand, there was the summit itself. The G20 met to tackle a broad range of global issues such as climate change. I have argued elsewhere that this amounts to the New International Security Agenda: key issues include climate change, poverty, pandemic disease, financial stability, etc. Although governments remain key players in this agenda, they cannot resolve these issues on their own. Collaboration must extend beyond governments to a broad range of state and non-state actors, including international organizations, NGOs, and companies. This is the Networked World of multi-stakeholder diplomacy. This agenda provided the issues for the G20 communique (although, as suggested above, getting your pet issue name-checked in the communique doesn’t amount to much, unless you use it as a pretext for pushing on hard).

The G20 Summit was an audition for those aspiring to fill the leadership vacuum. None convinced.

The second kind of activity were the series of bilateral meetings held in the margins of the G20, for example the much touted meeting between Trump and Putin. Although global issues may have been name checked (“please, President Trump, think again about Paris”), these meetings focused on more traditional geopolitical issues: North Korea, Ukraine, Syria, Libya, interference in U.S. elections. These are issues diplomats a hundred years ago would recognize. These are also issues where states remain the main players, in large part because they still deploy the greatest capacity to apply violence. Interestingly, the cyber world, and in particular cybersecurity, look to reinforce rather than undermine the role of the state.

This bifurcation between the two agendas risks tearing diplomacy apart, with the result that neither agenda ultimately is dealt with. The challenge for diplomacy is to evolve structures and techniques that allow both agendas to be tacked together, and in ways that are self-reinforcing. Ironically it may be the Russians that point the way: what is hybrid warfare but the application and techniques of the Networked Age to the geopolitical agenda?

The other significant aspect was the vacuum left by the lack of U.S. leadership. I wrote some time ago about the school bus whose U.S. driver got off at the last stop. But Trump has accelerated the process. Apart from driving this lesson home, the G20 Summit was an audition for those aspiring to fill the leadership vacuum. None convinced. China has too many enemies and rivals on its borders (see its latest confrontation with India in Bhutan), and is not trusted (even by the Europeans). The EU is more divided than the current bromance between Macron and Merkel suggests (how long will Merkel put up with Macron’s Napoleonic pretensions?). It is in any case militarily weak, and talk about a new European defense union will change little in the medium term. Russia, of course, is economically too weak, as is India. Randall Schweller’s prediction (in his excellent “Maxwell’s Demon and the Golden Apple”) of an entropic world system of continual, and increasing, low-level conflict and disorder, looks ever more on the money. Welcome back to the 16th Century.

Photo via The White House I Public Domain