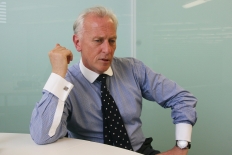 Shaun Riordan is a British Senior Visiting Fellow of the Netherlands Institute of International Relations (“Clingendael”), where he is a member of the Diplomatic Futures Group and heads the Business Diplomacy Project. He is also Principal Consultant with Aurora Partners. An independent geopolitical analyst, Shaun has over 10 years experience of advising governments and companies on the development of diplomatic strategies to manage geopolitical risk. Prior to this, Shaun spent 16 years in the British Diplomatic Service with postings to New York, Beijing and Madrid as well as stints in the Counter-Terrorism and Balkans Departments of the Foreign Office. With a Masters Degree in Philosophy from Cambridge University, Shaun has taught in the Diplomatic Academy in Armenia and in the Madrid Financial Markets Institute. He is the author of The New Diplomacy (Polity 2003 - published in Bulgarian in 2015) and Adios a la Diplomacia (Siglo XXI 2005). He is co-author of Futures for Diplomacy: Integrative Diplomacy in the 21st Century (Clingendael 2012) and the Clingendael Policy Brief "Whither Foreign Ministries?". Most recently he has written the Clingendael Policy Brief on Business Diplomacy and co-edited the special edition of the Hague Journal of Diplomacy on the same subject. He also collaborates with the Centre of Economic Diplomacy at Wuhan University and is a consultant with Geolab at the University of Deusto in Bilbao.