The future is now. The economic crisis has sped up globalization, and we are already living in a new era. The strength of the BRICS countries has to compete with growth in the “double MIT” (Mexico, Indonesia, Turkey and Malaysia, India, and Thailand) and more. Of the world’s major global companies, 25% are in these countries. 16 out of the 20 largest cities in the world and around 1% of the world's GDP are located within these countries. It is time to abandon the term “emerging economy,” as these countries are already responsible for the majority of growth in trade flows. This is the “new normal.”

Everything has changed in the international political arena. Well, everything but the fundamental tool of international relations: diplomacy. Given its nature and its ties with states, it is a conservative activity both in its principles and practices. It is hard to innovate in diplomacy, as it was conceived for a bipolar world with superpowers who believe in gathering information through wiretapping. But the current strategic environment requires a thorough revision in order to keep up with the changes that have taken place in the ecosystem of international relations.

Sovereignty is no longer the exclusive domain of states, or the exclusive condition in order to partake in decision-making. The Free Trade Agreement between the United States and Europe, the role of cities and regions, and the proliferation of big corporations are illustrative of this transformation. No actor wants to be driven out of the international arena. For these reasons, we have seen a huge rise in “network diplomacy,” complementing traditional diplomacy efforts, based on club dynamics. The latter can be joined by invitation only, whereas the former uses the resources of connectivity in order to influence decisions. Rather than size or budget, connectivity is the determinant factor. Twitter could be considered an archetypal example of network diplomacy.

The demand for transparency and good governance has surged in the wake of the WikiLeaks phenomenon, NSA wiretapping, and the recent accusation of industrial espionage cases, which have increasingly put diplomacy under scrutiny from the media and public opinion. As Eytan Gilboa has noted, both Twitter and international television broadcasters, particularly Al Jazeera, have heralded real time diplomacy directed at a global audience. All diplomacy is now immediate and visible diplomacy. It means less time to react and direct interaction with online communities. Of course, it also means new problems for diplomats, political scientists, and other practitioners of international relations.

The Internet and new media have become the 21st century's public sphere. Jürgen Habermas demonstrated how citizen opinion and the Enlightenment emerged from coffee houses. This space has now moved onto the net, hence the importance for diplomatic actors of a solid and coherent presence in the virtual world. For that reason, open societies must fight for freedom to connect in order to safeguard the free circulation of ideas. This leads to the questions; can we have both freedom and security? How much transparency is compatible with confidentiality in state affairs? And finally, what sort of freedom of expression do we need? This is the new trilemma in diplomacy.

To hack diplomacy would consist of the modification, reconfiguration, and reprogramming of professional diplomatic activities, in order to execute a strategy in accordance with the new strategic environment. The way in which the foreign service is arranged, how foreign relations with citizens are established, and the way in which diplomacy is conducted must all be modified. The new ecosystem of international relations demands new competencies and professional skills, which will complement traditional skills. Diplomats need to realize where added value is now being generated and reorient their missions accordingly. 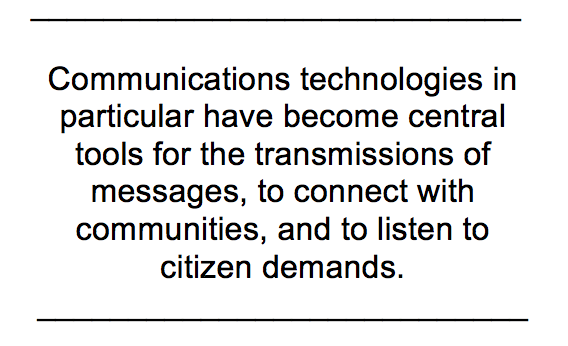 Embassies now face the dilemma of dealing with many new and diverse players in the international arena. Just when we thought that most of the investment was to be in buildings and facilities, it turns out technologies can fix a good deal of problems. Embassies are not the only institutions affected: the same situation exists at universities and newspapers. Network diplomacy has revealed the outcome of this technological change: by demanding a more decentralized, mobile, and flexible distributed presence. Hacking diplomacy stands for connections and builds online communities to influence in the digital arena, leading to a more connected foreign service that is sharper and more open to change.

In considering how to establish relations with citizens, we must account for their ability to influence their governments' decision-making and to have an effect on the behaviour  and habits of corporations. That's where public diplomacy becomes crucial. Public diplomacy consists of an information, education, and entertainment strategy focused on influencing publics abroad. It includes numerous exchange programs and nation branding techniques. It is not a public relations campaign, but a government action.

The advantage offered by public diplomacy as opposed to conventional diplomacy is greater room for innovation: PD practitioners can experiment with small budgets and new areas of activity. It's an ideal lab because it allows for change and the creation of new activities, while simultaneously providing new professional skills to be put into practice. Furthermore, the idea of transforming perceptions abroad drives internal innovation.

Communications technologies in particular have become central tools for the transmission of messages, to connect with communities, and to listen to citizen demands. The key to success is the effective connection of governments with the interests of citizens. A government’s relationship with citizens abroad should be independent of its diplomatic relations with those citizens’ government. Public diplomacy involves creating communities of interest with publics abroad. The demographic challenge deserves special mention: public diplomacy will not be able to exert influence if it does not adapt to online social networks where young people (comprising 45% of the world's population) spend half of their lives.

Within conventional diplomacy, it's high time we create and define a doctrine on digital geostrategy: the protection of individual rights, neutrality of the net, the digital divide, fostering freedom of expression, and many other issues are in need of international response. That's where the diplomats' experience in dealing with multi-stakeholder and multilateral approach to new challenges will be critical.

In this new strategic environment, what tools will be needed to confront the 21st century? This set of new competencies draws on the good practice of conventional diplomacy. This is not a “new” diplomacy—it’s just that diplomats need new skills (including more mobility and more adaptability) and a different type of management, which includes strong communicative activity. It's no coincidence that the British Foreign Office has launched more than a hundred blogs through its representatives abroad. In network diplomacy, new media will essential. Social networks aren't just a space for entertainment but are where a climate of opinion is developed. Citizens are already equipped with these skills, socializing as they are in the global world of Facebook or Google, and are able to communicate with opinion leaders, whether it’s Angelina Jolie promoting her campaign in the Democratic Republic of Congo with William Hague, or Edward Snowden and his struggle against the NSA.

That's why hacking diplomacy doesn't mean abandoning everything that has come before. Social innovation doesn't work this way. Diplomats will remain the backbone of diplomatic activity, but they must be engaged in inclusive practices integrating innovation, new media, and networks in their day-to-day duties.

This is a major challenge for diplomats and their organizations. Are we ready?

Juan Luis Manfredi
CPD Blog Contributor
Senior Lecturer at the University of Castilla-La Mancha
YOU MIGHT BE INTERESTED IN...

Mary Thompson-Jones is the author of To The Secretary: Leaked Embassy Cables and America's Foreign Policy Disconnect. She joined the foreign service as a public diplomacy officer and worked in Madrid, Prague...

Five Ways to Sharpen the Effectiveness of Canada's Diplomatic Corps