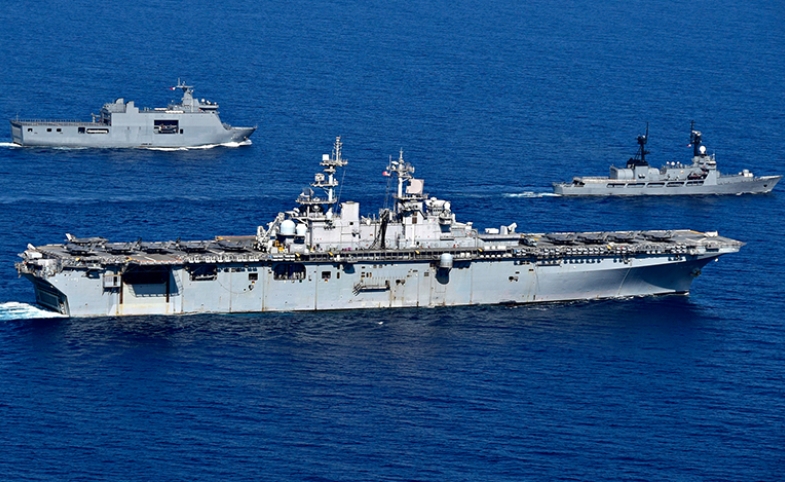 This year marks the fifth anniversary of the 2016 The Hague Tribunal ruling, brought by the Philippines against China concerning the legitimacy of China’s claim in the South China Sea. The tribunal ruling is regarded as one of the most important milestones for the longstanding South China Sea dispute and decided that China’s "nine-dash line" territorial claim is illegal under international law. However, despite the fact that the 2016 tribunal made it clear that China was actually breaching international law, in the last five years several Chinese maneuvers have continued to assert their illegal claim not only by using a military presence in the disputed area but also by creating propaganda and public diplomacy in many ways.

Indeed, the South China Sea dispute is a very complex problem. It involves high geopolitical tension between major power rivalries. More importantly, the core problem of the dispute consists of a technical maritime delimitation and other technical aspects of the law of the sea. This complex nature of the dispute has made it difficult for the general public to understand; therefore, the core problem is often only understood by international lawyers, diplomats and international relations analysts. This lack of public understanding has created opportunities for China to shape public opinion on the issue. Through public diplomacy, propaganda and discussion with the general public, China has tried to familiarize broader audiences with its nine-dash line.

Over the last five years, there have been many confrontations regarding the South China Sea. Not only between coast guards and navies in the disputed area but also in debates between scholars and analysts in academic forum discussions, op-eds in newspapers, academic journals, seminars and focus group discussions where Chinese scholars argued against other counterparts about China’s legal positions in the South China Sea. These scholarly discourses and public debates have become very important in shaping public opinion on China's claims in the dispute and overshadows the actual legal problem.

Nguyen Thuy Anh, research fellow at the East Sea Institute of the Diplomatic Academy of Vietnam, argued that Chinese scholars have been using scientific journals to change facts and shape public perception on these issues. One example was in 2018, two years after the tribunal ruling, when the Chinese Journal of International Law published a 500-page “critical study” written by the Chinese Society of International Law, backing up the Chinese government positions against the ruling.

Public diplomacy will not be successful if it is used to justify something that is illegal under international law.

Author Anthea Roberts in her latest book Is International Law International? argued that in the last several years, the Chinese government has given funding for law of the sea-related research topics, especially relating to the South China Sea issue. As Roberts observes, this massive research funding can be seen as a strategy of the Chinese Communist Party to use the academic community to back up the positions of the Chinese government. Therefore, in the last several years, United States officials have raised concerns about academic freedom and autonomy of Chinese scholars as being controlled by the Chinese Communist Party, therefore questioning the legitimacy of Chinese scholarship on South China Sea-related research.

Moreover, China’s attempt to shape public opinion has not only been through academic scholarship but through more candid ways with the general public. In 2019, controversy surrounded the animated movie, Abominable by DreamWorks. It shows a map of Asia that includes China’s nine-dash line.

Another attempt by China to familiarize the nine-dash line with the public is by putting it on the Chinese electronic passport that was introduced in 2012. These events also raised questions and protests from other claimant states. One of the strongest protests came from the Philippines under then-President Benigno "Noynoy" Aquino III, who issued a policy to prohibit the Philippines from stamping Chinese passports with the nine-dash line picture.

In the last several years, the rise of China has become the center of world attention. Currently, world perceptions toward China are rather antagonistic, as it is seen as a human rights violator and bully to its neighboring states considering what happened with Uyghur Muslims in Xinjiang, protesters in Hong Kong and escalation in the South China Sea. Therefore recently, in June 2021, President Xi Jinping called for a more “lovable” image of China to make more friends and gain more respect from the international community. With this lovable image, he hopes that China can have more economic cooperation with other countries and a more positive international public opinion. And here is how public diplomacy has a more important role than ever before. It is crucial for China to promote its image abroad not only to governments but more broadly to civil society, the academic community and public audiences.

There are two reasons why China’s public diplomacy on the South China Sea issue is not likely to succeed. First, there will always be counterarguments from scholars from other countries rebutting the Chinese academic argument across many scholarly platforms and discussions. In responding to Chinese scholars’ articles defending the nine-dash line, scholars from Vietnam, Indonesia, the United States and Australia have also written extensive academic articles refuting Chinese scholars' arguments. Therefore, it seems that scholarship from Chinese academics defending China’s positions on the South China Sea will not go without answer.

Second, to really have a “lovable” Chinese image abroad, China first must deal with the core problem. For instance, for the South China Sea issue, China must assure others that it complies with international law. Because even though China tries its best to shape a “lovable” Chinese image through public diplomacy, it will not succeed if China has missed the core problem of breaching international law. Public diplomacy will not be successful if it is used to justify something that is illegal under international law. In analyzing the dispute, people will care more about the substance of the dispute instead of how the dispute is framed through public diplomacy, rhetoric and propaganda.

That being said, public diplomacy to create a more "lovable" Chinese international image will only be a success if it is based on international law, and it will likely fail if it plays against it.