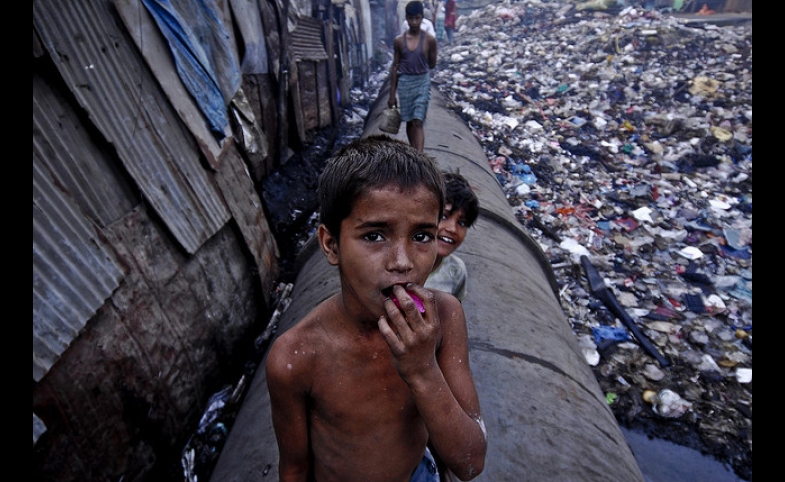 In the new movie "Slumdog Millionaire" there is a poignant scene that all public diplomacy experts should have etched in their minds. It's of a classroom full of boys in a Mumbai slum inhabited by Moslems passing around one copy of the "Three Musketeers" as part of their English lesson. Later we watch one of those boys evolve into a gangster. He could just as easily have joined Al Qaeda. The scene takes place in the early 1980's, but I suspect that in spite of India's growth that similar scenes can be found today. I say public diplomacy experts should keep this in mind because while much is said and written about how much the world is changing and the need for public diplomacy to change with it there is still much that has not changed. About 20% of the world's population is completely illiterate. That doesn't include functionally illiterate. Only about 22% of the world has access to the Internet. Of course, in order to go online one needs to have a computer and usually electricity. Furthermore, most websites are in English. Most people in the world do not own a television set. Most rural villages in poor nations usually have one that is shared.

It is important that public diplomacy programs target their audiences appropriately. The State Department's use of the Internet, chat rooms, and Facebook is valuable in engaging extremists of all sorts that commonly use the Internet both to spread their views and to plan attacks upon others. However, we need to keep in mind that preventing people from becoming extremists in the first place is also important and "old technology" still needs to be an important part of that. Public Diplomacy 1.0 is still very relevant in today's world.

Many years ago as a young backpacker in Peru, I had an experience that drove home to me for the first time what an important medium radio is. I was staying in a small home with no running water or electricity on an island in Lake Titicaca where people were still living in a way that hadn't changed much for centuries. I watched a woman milling grain off in the distance and then I heard the strangely out-of-place sound of Eric Clapton on a radio she had close by. In this remote area the radio was the perfect medium to reach people. It didn't require electricity, expensive equipment, literacy, or even time and attention. A woman going about her dull daily chores could listen to it and get her work done at the same time. Radio programs that educate can reach her in a way that TV programs, the Internet, and even books can not. Much of the world still lives like this. Indeed, television is still a new medium in many places and its uses are only now being explored in some countries. I worked with a young Indonesian television news anchorman just a couple of years ago who was interested in learning about TV political talk shows because he was developing one. In Indonesia it was still a new concept.

The printed word is also still critical. We tend to forget that books are a rare and expensive commodity in much of the world, even more so when they are not in English. I once had an assignment to work with a young conflict resolution specialist from Indonesia on a State Department program. He was working to combat religious violence. One afternoon we had time to kill before an appointment so I took him to a bookstore. Earlier in the day we had an appointment at the Washington, DC public library where he had commented about how hard it is for him to get books in Indonesia. In the store he was very excited to find a copy of "The Battle for God" by Karen Armstrong. He used $26 of the cultural allowance that the State Department gave him to buy it. He told me that when he was finished with it he was definitely going to give it to some of the Imams that he worked with. A couple years later I would be in the same store with an Islamic scholar from Indonesia who worked to combat Islamic extremism. I suggested that he may want to buy a copy of the same book. He told me he read it already and so had everyone that he dealt with. He said it was very popular in religious circles in Indonesia. So, a few copies of a $26 book educated a number of Imams and Moslem religious scholars in a way that many more expensive programs could not do.

That same Moslem religious scholar had also said that jihadist literature was widely available in Bahasa for free in any number of Indonesian shopping malls. He had been trying to make literature on democracy and on America available in Bahasa, but even getting things translated was proving to be very difficult let alone printing copies for free distribution. The few people in America with Bahasa skills are very much in demand and can make more money working in the private sector than they can working for the State Department or for non-profits. The Global Americana Institute is now working in the private sector to translate the classics of American thought and history into Arabic. There is a need for similar work in other languages. The State Department doesn't have to do it all in this area, but it should definitely be doing more.

Let's keep in mind that what has happened these past couple of decades is that the number and variety of ways that people communicate has expanded, but no one means of communication has supplanted another. We still need to be able to do it all.

Mitchell - you make a very strong argument here, one I am sure Voice of America proponents would salute, especially considering the recent cuts in Russian and Hindi language radio programming. Those seem strategically vital languages for public diplomacy outreach, and are in areas far too significant to be left simply to dialogue through web-based platforms.