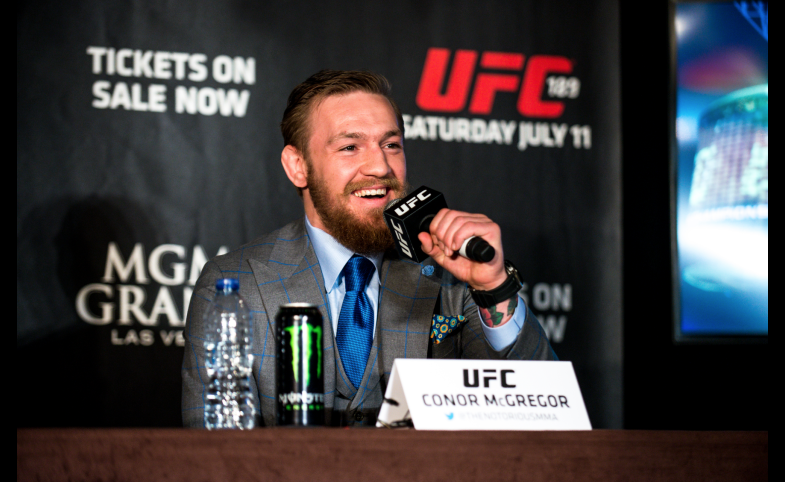 When thinking of sports diplomacy and the international impact sports have on the world, I bet mixed martial arts doesn’t come to mind. But it should. The Ultimate Fighting Championship, known as the UFC, has catapulted the sport of mixed martial arts into the global conversation through a combination of high-profile international fighters, global distribution and a variety of martial arts disciplines from around the world. Plus--with the anticipation of this Saturday’s boxing match between Ireland’s Conor McGregor, arguably the UFC’s biggest star, and undefeated professional boxer Floyd Mayweather Jr., martial arts is becoming a leader on the global stage.

What is Mixed Martial Arts?

While McGregor will be making his professional boxing debut against Mayweather, McGregor fights with the UFC, the popular mixed martial arts organization based in Las Vegas. Mixed martial arts, or MMA, is a combat sport that combines a variety of disciplines into one. Fighters can use Jiu-Jitsu techniques, Muay Thai striking, Karate kicks, judo throws and more, all in one fight. The combination of disciplines in and of itself is global – The most popular form of Jiu-Jitsu comes from Brazil, Muay Thai comes from Thailand, and Karate and Judo from Japan.

Just like the NFL is to football, the UFC is to mixed martial arts. The organization is the biggest MMA promoter in the world and has brought the sport global attention.

Last semester, USC Annenberg hosted Ike Lawrence Epstein, the Chief Operating Officer for the UFC, to discuss media strategy for the organization. The conversation highlighted many aspects of the brand’s global reach – UFC content reaches 156 countries and territories in 29 languages, and reaches 1.1 billion households on an annual basis. In addition to content distribution, the UFC has 46 million global followers on major social media channels, with the U.S., Brazil, China, Russia, the Philippines, and Japan as the top countries leading the way due to the size of their UFC fan base.

But more than global distribution is the international star power that comes with the UFC. Saturday’s McGregor vs. Mayweather fight exemplifies its global impact. McGregor, the reigning UFC Lightweight Champion, is from Dublin, Ireland, and is known for his brash behavior inside and outside the ring.

His personality, and frankly, his skill and confidence, have made him a star—thus generating serious interest in his home country. Sports Joe notes that on one of the most popular Dublin tour bus routes, tourists can now visit McGregor’s home gym: the Straight Blast Gym, to get an inside look into McGregor’s training.

Tourist excitement is one thing, but McGregor is even being noticed by his own government. The office of Ireland’s Minister for Transport, Tourism and Sport spoke with popular MMA site, Bloody Elbow to note McGregor’s impact: "There is no doubt that Conor McGregor has raised the profile and popularity of Mixed Martial (MMA) considerably, and Ireland's sporting profile in the process, on foot of his recent successes."

While McGregor may be the most well-known UFC champion, there are a variety of other fighters who come from around the world representing their home countries in MMA.

Poland is home to Women’s Strawweight Champion, Joanna Jędrzejczyk, who often posts bilingual Polish and English captions on her Instagram photos to her 915k global followers.

Women’s Featherweight and Bantamweight Champions Cristiane “Cyborg” Justino and Amanda Nunes are both Brazilian, while Middleweight Champion, Michael Bisping, is English. Other popular fighters also come from beyond American shores: Joanne Calderwood is from Scotland, Jose Aldo from Brazil, Khabib Nurmagomedov from Russia, Alistair Overeem from the Netherlands, plus many more, creating a necessity for translators to be present at UFC fights.

So how does this relate to soft power? For one, because of the UFC’s global distribution, international audiences are introduced to a variety of cultures and languages through their favorite fighters.

Additionally, fighters can have a substantial social media reach, and like Joanna Jędrzejczyk, are engaging with their followers. McGregor has a whopping 17.2 million followers on Instagram, and the talk of the famous #MayMac fight has been circulating for weeks.

In addition to fighters generating global interest, UFC fights are also held around the world, ensuring the UFC’s place as a global organization, NOT a solely American enterprise. Past fights have been held in the Netherlands, the UK, Brazil, Canada, Germany, Mexico, and Australia, drawing in viewers and fight fans from around the world.

The UFC is a global phenomenon, and its fighters are prime ambassadors for their home countries and cultures. The hype over the #MayMac fight is just one example. And, to summarize the UFC’s soft power impact on the world stage, we take the words straight from Conor McGregor’s own mouth as he spoke of his Irish teammates winning fights:

These words are immortalized on a mural in Dublin. These words became famous. But while Conor may be talking about fighting, these words have deeper meaning. These words exemplify the very nature of the influence that international fighters have on the world. These global ambassadors are here to stay.

Photo by Andrius Petrucenia | CC by 2.0