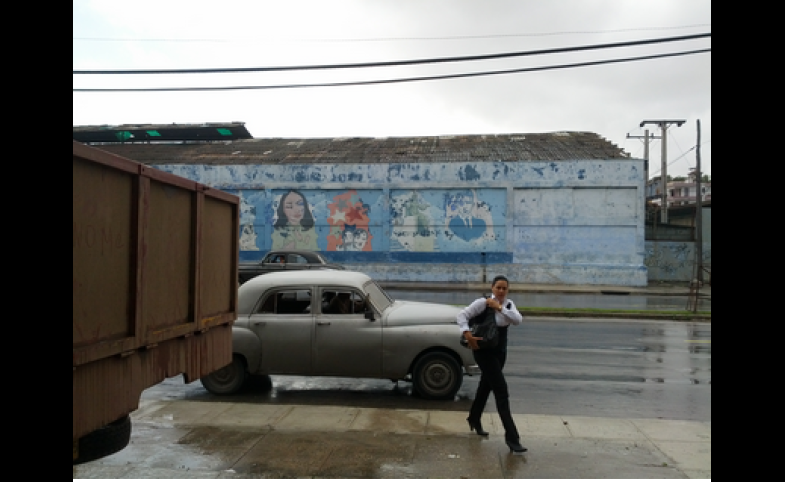 During the memorial service for former South African president Nelson Mandela, as tens of thousands gathered in the FNB stadium in Johannesburg and millions more watched on television, an entirely different story emerged: the ten-second interaction between U.S. President Barack Obama and Cuban President Raul Castro.

As Obama entered the VIP seating area, the first head of state to greet him was Raul Castro. The two appeared from a distant camera angle to exchange pleasantries and shake hands. Both leaders were smiling as Obama moved on to another head of state with a strained U.S. relationship, Brazilian president Dilma Rousseff. Yet, despite such a short (and at face value, meaningless) encounter, a major storyline that emerged from Nelson Mandela's memorial was the possible symbolic meaning behind the Obama-Castro handshake. Was Obama just being cordial? Was it planned? Does this signify a thawing in U.S.-Cuban relations? Does it mean nothing? Or does it mean everything?

The answers to these and similar questions, posed by The New York Times, Christian Science Monitor, and Sydney Morning Herald, are debatable. While the White House insisted Tuesday morning that Obama's handshake with Castro was "not planned," and the Cuban government later insisted the same, there is little doubt that some sort of interaction was inevitable. Whether Castro planned to be the first to greet Obama on the stage or not, the symbolism of the interaction, intentional or not, cannot be understated.

Tuesday's interaction, after all, was only the second time since the Cuban Revolution in 1959 when a sitting U.S. and Cuban president shook hands. Back in 2000, Raul's brother and then-president Fidel Castro shook hands with President Bill Clinton. As the Sydney Morning Herald noted on Tuesday, the interaction thirteen years ago at the United Nations took place out of sight of cameras and "was not recorded for posterity."

Criticism of the handshake has been fast and fierce. Members of Congress (particularly those from south Florida), political pundits, and anti-Castro regime activists criticized President Obama’s handshake with Castro. Congresswoman Ileana Ros-Lehtinen (R-Fl) told Secretary of State, John Kerry during an unrelated hearing that "when the leader of the free world shakes the bloody hand of a ruthless dictator like Raul Castro, it becomes a propaganda coup for the tyrant."

Proponents for a revised U.S. approach to the Cuban regime have signified the event as a possible opportunity for a thawing of relations. Similarly, U.S.-Iranian relations were gradually improved with the efforts of Iranian President Hassan Rouhani to engage Western leaders at the United Nations (although Rouhani and Obama never shook hands during that particular U.N. event).

From a public diplomacy perspective, these interactions, albeit brief, can play a role in sending messages to domestic and foreign audiences and encourage change. As calls for a re-assessment of U.S. policy towards Cuba continue to grow and as the Cuban government appears to be loosening its grips on the economy, the magnitude of Obama and Castro shaking hands and interacting can have major implications.

For Cubans, this event has the potential to symbolize that the Yanquis are more approachable than before. It also sends the message that Castro and Cuba are on the same level (or at least on the same stage) as the United States, Brazil, and other major powers. These symbols are important when it comes to countering anti-U.S. rhetoric.

For the American audience, the handshake sends signals that change in the relationship is possible during Obama's second term. While relations are not expected to change overnight, these small events, coupled with significant policy changes by both countries, can build into more positive public opinion and real policy change down the line. Cuba's economic reforms and the U.S. relaxing certain restrictions and other portions of the embargo are also pieces of the larger puzzle.

While the act of a handshake might not, as an article in The Atlantic argued, "move the needle," it is yet another piece in a series of actions, policies, and good-faith efforts to repair and rebuild the U.S.-Cuban relationship. Public diplomacy rarely moves the needle quickly enough for a particular action to be viewed "successful" by policymakers and media. The handshake will likely be no different in changing public opinion polls and policymaker's minds in the next few months. However, these opportunities can encourage further dialogue about the current situation and provide opportunities for future dialogue between heads of state, government officials, academics, and foreign publics.

Will the Obama-Castro handshake mark the beginning of a new U.S.-Cuban relationship? Perhaps, but those who criticized and opposed the President for shaking the hand of a man whose authoritarian regime restricts human rights, a free press, and free speech (whether that man is Raul Castro or Hassan Rouhani) are missing the larger point about public diplomacy, image, and messaging. The U.S. should be actively engaging its enemies through traditional and public diplomacy means, and as the leader of the free world, President Obama should always be willing to engage other foreign leaders and foreign publics, especially if they appear to want engagement as well (as shown with Iran and Cuba). If we are to believe that our democratic and human rights values are of the greatest importance, actively engaging our ideological opponents through public diplomacy and messaging will only strengthen our own resolve and weaken the rhetoric of our opposition.

These small interactions go beyond the initial handshake and can provide unique opportunities for dialogue and engagement between countries and foreign publics. They can inspire debate, encourage conversation, and gradually change public opinion. While major policy hurdles will still require traditional diplomacy and serious negotiation, and while American policymakers should continue to stand firm on issues of human rights in Cuba (as they should throughout the world, including within the U.S.), there should always be an open door and an opportunity for dialogue.

So the Obama-Castro handshake might not mean much today, or tomorrow, or next week. Its significance in the coming years, however, could be much more important.