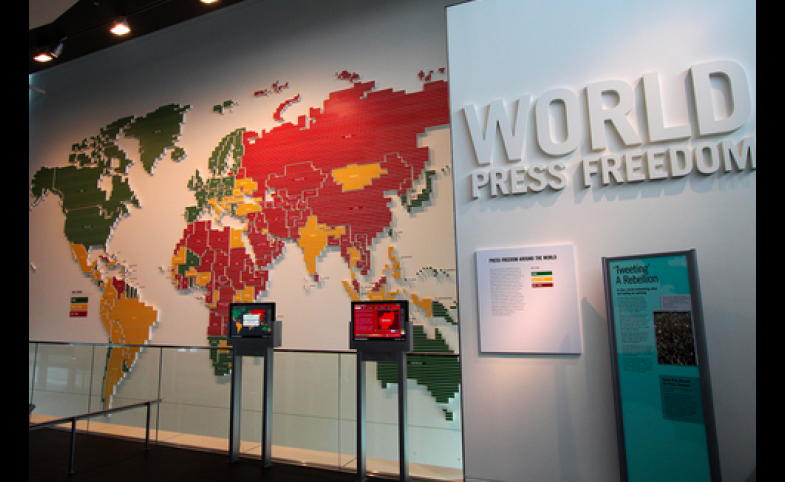 Among the principal assets of U.S. public diplomacy are American values. They are admired around the world, even by many people who dislike American policy. No other political system offers such extensive individual and systemic freedoms as those enumerated in the Bill of Rights. Showcasing and standing up for those freedoms should be at the heart of U.S. public diplomacy.

To narrow this a bit, consider freedom of the press. From time to time, it faces challenges within the United States, but it remains a fundamental element of American law and national character. As an instrument of soft power – which relies on attraction rather than coercion – it is an invaluable attribute.

In many places throughout the world, freedom of the press is under siege. This is nothing new, but the breadth and virulence of current efforts to silence journalists is striking. Those in countries where independent reporting of news has been blocked might well ask, “Where is the United States?”

The official U.S. response is usually little more than offering perfunctory remarks about the value of a free press and finger-wagging at the governments jailing or otherwise obstructing journalists. This is not enough.

Consider the imprisonment of journalists in Egypt. People in the Middle East take note of the passive response of the United States, and so when U.S. diplomats tout the value of a free press, the disingenuousness is obvious and American credibility suffers. The Egyptian case receiving most attention involves journalists working for Al Jazeera. The Qatar-based channel has always been controversial, but it remains one of the Arab world’s most influential news organizations. When its journalists are locked up, the United States should demand that they be freed and be prepared to back up those demands.

The Al Jazeera personnel are not alone in Egypt. Bloggers and others critical of Field Marshal Abdel Fattah al-Sisi’s government also have been imprisoned. Al-Sisi is “our guy” (at least for the moment); he depends on U.S. support to keep the battered Egyptian economy afloat, so the United States has considerable leverage. But leverage is valuable only if it is used.

Similarly, Egypt is far from alone in its suppression of news media. In Russia, the Kremlin has recently tightened its control over news organizations, and China will not allow certain American journalists to work there. Plenty of other nations can be added to this list, all standing in stark contrast to the openness of the United States.

The U.S. public diplomacy strategy in response to this situation should proceed on several levels. First, President Barack Obama should set the tone with a major speech about press freedom. It should be translated and disseminated widely.

Second, the United States should make clear that it is standing by its values. It should pressure the Egyptian government by threatening to withhold aid until press freedom – which enjoyed a brief surge of growth after the uprisings of 2011 – begins to be rebuilt.

Third, the State Department should shine a spotlight on its existing programs in support of international journalists and should expand those efforts. Along with the work of numerous private organizations, the U.S. government already offers foreign journalists a wide array of training programs and opportunities to visit the United States. These should be made more visible to diverse publics, not just the international journalism community.

This is one of those instances in which the United States holds the moral high ground but doesn’t seem to know how to take advantage of it. Reaching global audiences has never been easier, given tools ranging from satellite television to social media, and yet the United States continues to lag in embracing assertive public diplomacy strategies that could engage those large audiences. The White House and State Department need to rev up the engine of public diplomacy and make it more central to U.S. foreign policy. Forcefully defending press freedom would be a good way to start. The world will take note.

As Barack Obama nears the end of his presidency, and the political fight to succeed him grows more intense, how might we view the foreign affairs accomplishments and failures of the Obama years through the lens of public...