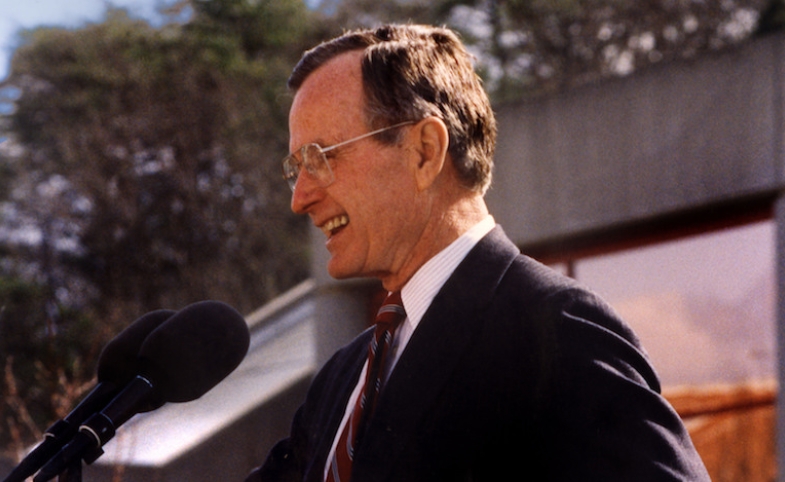 George H. W. Bush understood diplomacy. He knew that it could not be conducted by bluster and edict. He knew that effective foreign policy is intrinsically complex and does not lend itself to simplistic messaging. He knew that the United States—even as the world’s most powerful nation—would need to nurture alliances to reach its global goals.

There is much to be learned from the ways that Bush approached the design and implementation of American foreign policy. His successors in the White House (including his son) have not always taken these lessons to heart, and America’s standing in the world has suffered as a result.

I am co-authoring a book about NATO expansion, and the research about the Bush years is fascinating. It is hard to imagine a president more sophisticated and dedicated in his approach to foreign affairs. During 1989 and 1990, the future of NATO was uncertain, dependent to a considerable degree on the future of Germany. Bush, working closely with German Chancellor Helmut Kohl, navigated the turbulent seas of German reunification, calming Germany’s neighbors that had all-too-vivid memories of a strong, united Germany.

Margaret Thatcher said: “We’ve been through the war and know perfectly well what the Germans are like…National character basically doesn’t change.” The Polish and Czechoslovakian governments worried that the new Germany would seek to redefine its borders with those countries by claiming territory with significant numbers of German-speaking residents. Mikhail Gorbachev, whose country had seen more than 25 million of its citizens die during WWII, knew he would face domestic political peril if a strong, unified Germany began flexing its muscles.

It is hard to imagine a president more sophisticated and dedicated in his approach to foreign affairs.

And yet Bush persevered. He understood the value of the momentum generated by the 1989 opening of the Berlin Wall and other democratic stirrings in Eastern Europe. He did not want to waste an opportunity to redefine the future of Europe. So, he worked at it. Face-to-face meetings, phone calls, letters. He and his two principal foreign policy advisors, Secretary of State James Baker and National Security Advisor Brent Scowcroft, shaped the American narrative and gradually other nations fell into line. While this was going on and the Cold War was nearing its end, Bush was particularly careful not to engage in triumphalism that would have jeopardized Gorbachev, who Bush came to recognize as someone he could work with in reducing U.S.-Soviet tensions.

Bush has sometimes been criticized for being too low-key in reacting to events such as the Berlin Wall’s opening, but he realized that bombast in foreign affairs is almost certain to prove counterproductive. He was a craftsman, not a cheerleader. This was again apparent when he assembled a coalition of forces—including Arab militaries—to liberate Kuwait in the 1991 Gulf War. This took time and persistence, but Bush understood the geopolitical dynamics of the Middle East well enough to know that if the United States plunged into battle on its own, its likely military success would be more than offset by a surge of anti-Americanism in the region.

On the diplomatic side, a case can be made that the Gulf War marked the true end of the Cold War because the Soviet Union, rather than reflexively challenging the American effort, joined the United States in condemning Iraq’s invasion of Kuwait.

By the end of 1991, the Soviet Union was no more. Bush told the American people that “you and I have witnessed one of the greatest dramas of the 20th century…the historic and revolutionary transformation of totalitarian dictatorship, the Soviet Union, and the liberation of its peoples.”

Bush then turned his attention to the faltering U.S. economy, but he was too late. In November 1992, he lost the presidency to Bill Clinton. His legacy, however, is not that he failed to win reelection, but that he succeeded in making the world safer and in reinforcing American world leadership. He acknowledged the responsibilities that accompanied this role: “We cannot retreat into isolation. We will only succeed in this interconnected world by continuing to lead.”

That advice is also part of George H. W. Bush’s legacy, and it is worth pondering today.

Note from the CPD Blog Manager: This piece was originally published by the Pacific Council on International Policy.