Home|Press Freedom Under Pressure: The Widening Gap Between Turkey's PD Rhetoric and Reality 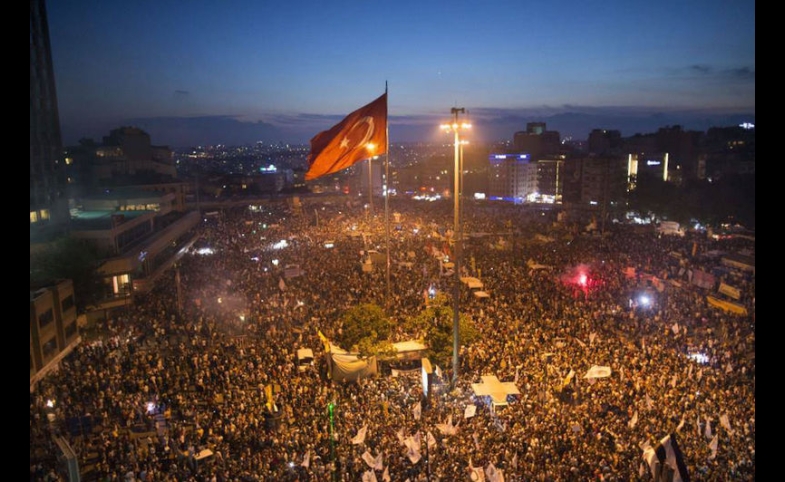 Press Freedom Under Pressure: The Widening Gap Between Turkey's PD Rhetoric and Reality

Note from the CPD Blog Manager: This piece was co-authored by Jordan Warlick, Contributing Researcher, CPD Project: The Public Diplomacy of Emerging Powers: Insights from Indonesia and Turkey.

The recent massacre at Charlie Hebdo magazine’s Paris office sent shockwaves through Europe and beyond, with freedom of opinion and the press defended in the West as a fundamental principle and pillar of democracy. Though Turkey expressed its condolences, and while Turkish Prime Minister Ahmet Davutoğlu joined last Sunday's giant unity march in Paris (11 January 2015), it has been recently derided in the international press for the country’s own struggles in this regard. Numerous recent conflicts around press freedom have not only reflected a deeper divide between the rhetoric and the reality of Turkey’s public diplomacy under the 2003-present regime of Recep Tayyip Erdoğan, but have also revealed the much more profound domestic struggles going on behind the scenes.

Erdoğan’s landslide victory in Turkey’s presidential elections on August 10, 2014, with 52% of the vote, demonstrates that his authority in Turkish politics is not diminishing, even after already holding the post of Prime Minister for eleven years. Prior to his reelection, on July 11, 2014, Erdoğan released a “vision statement” on the campaign trail filled with democratization and reform pledges, including a pledge to push for a new civilian constitution and expanded minority rights. “We should adopt democracy,” the statement says, “not as a political model, but as a culture dominating every field of our lives.”

While Erdoğan’s domestic and international rhetoric has remained an unwavering voice for democratic and social liberties, as well as for Turkey’s future evolution, his rule appears to have taken on an increasingly authoritarian bent since 2002. Limits on freedom of the press, increased Internet censorship, and reactions to anti-government protests seem to contradict the administration’s mantra. This discord between the Turkish government’s democratic rhetoric and its contradictory actions reveals an inconsistent public diplomacy and raises questions about Turkey’s future democratic path.

When Erdoğan and the Justice and Development Party (Adalet ve Kalkınma Partisi-AKP) came to power in 2002, their governance was presented as an idealistic vision for a new Turkey. They ran on a platform of reform, secularism, and Euro-Atlantic integration, which appealed to the masses, nationalists and liberals alike. Western politicians and media applauded Erdoğan for his plans to reinvigorate Turkish  democracy through his energized and driven reformism. Turkey’s aspirations to the EU incentivized and gave the government justification to make political reforms that encouraged democracy. Significant reforms were the sidelining of the military’s hand in Turkish politics, which since the 1960s controlled the political landscape, along with the banning of torture, and changes in municipal governance to give citizens more say over local matters. (1)

This discord between the Turkish government’s democratic rhetoric and its contradictory actions reveals an inconsistent public diplomacy and raises questions about Turkey’s future democratic path.

Yet since Erdoğan’s rise to power, no other party has had the strength to challenge the AKP. Erdoğan has become resistant to challenges to his rule, which is partly reflected in how often two phrases crop up in his justifications for subduing domestic protests: “know your limits and place (Haddini bilmek)” and “what is necessary is being done (Gereğini yapmak).” (2) Evidence of citizen discontent first shone though in the summer 2013 Gezi Park protests, which began as a peaceful sit-in at Istanbul’s Taksim Square on May 28, 2013, and which quickly spread to over 60 cities.  These anti-government protests were met with a severe police response.

Erdoğan’s reaction to challenges to his rule has also manifested in his treatment of the press. Turkey has reportedly imprisoned more journalists than any other country, including Iran and China (which reportedly hold the #2 and #3 spots respectively). The government’s surveillance of the press (and other public media) and heavy-handedness has cast a chill over public discourse, as it is understood that criticism of the regime may result in incarceration. Erdoğan’s attention and focus on media criticism has caused him to frequently accuse the international media of leading a campaign against Turkey.

In efforts to counteract domestic and international criticism, it is therefore revealing that so much emphasis has been put on public diplomacy over the last few years. In order to control perceptions, the Prime Minister’s Office of Public Diplomacy was created in 2010 to highlight the nation’s economic prosperity and commitment to democracy. In “Soft Power and Public Diplomacy in Turkey,” chief policy advisor to Erdoğan, Ibrahim Kalin indicates the government’s strategic reasoning for its new emphasis on public diplomacy: “In order for us to achieve success in explaining Turkey’s position in the face of accusations and problems our country has long endured in the international arena, it is necessary to use public diplomacy tools and methods to inform accurately the international community.” (3) Although by its nature, government-controlled public diplomacy efforts aim to frame the government and country in a positive light, the Erdoğan administration’s effort -propaganda- to suppress bad press while disseminating favorable depictions of Turkey, belies underlying domestic discontent and reveals domestic battles on such issues as internal political party dissent and corruption.

So the question remains: why, despite all this, does Erdoğan remain so popular? The answer is largely that AKP rule over the last 11 years has coincided with an era of enormous prosperity in Turkey. While there may be economic headaches in this emerging power’s future (e.g. sagging oil prices’ repercussions etc.), economic growth has boomed, and Turkey’s Foreign Direct Investment (FDI) has grown from just over $1 billion to an average of $13 billion per year in the past five years. Turkish per capita GDP has more than doubled from $4,595 to $10,946 and Turkey is now the 18th largest economy in the world. Under Erdoğan’s hand, Turkey has also assumed a regional and international leadership role, something that is attractive to Turkish citizens who have observed Turkey’s rise in prominence.

While Erdoğan’s record of domestic prosperity is strong, and while Turkey and the international media have heard promises of justice and liberties, rhetoric from the current regime has at times been betrayed by its actions. Such is the paradox of the country’s current public diplomacy.

Internet Freedom: a Tool for Democracy or Authoritarianism?

The irony of internet freedom was on full display shortly after midnight on July 16 in Turkey, when President Erdogan used FaceTime and independent TV news to call for public resistance against the military coup that aimed...

At the beginning of each academic quarter I get the same question from my students: “My mother loves/I love watching Turkish shows. Do you watch Turkish telenovelas?” In recent years, I have been asked the same question...