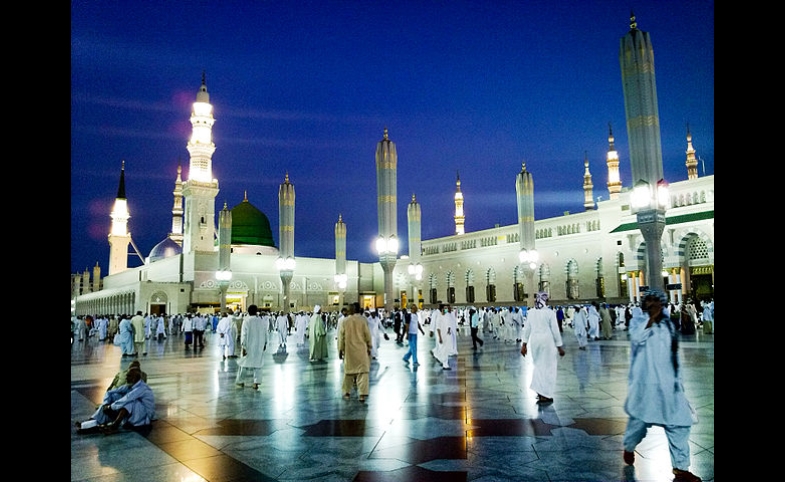 The Saudi Approach to Returning Jihadis

The triple suicide blasts in Medina, Jeddah, and Qatif on July 4th highlighted the internal threat Saudi Arabia faces from extremist militants. These bombings at the end of Ramadan, including an attack at one of Islam's holiest sites, the Prophet Mohammad's Mosque, have yet to be claimed by any group. Some, however, have speculated that ISIS was involved.

According to the Ministry of Interior at least 3,000 Saudi jihadis are fighting alongside ISIS in Syria and Iraq, and more than 760 have come home. Along with worries over recent attacks, these numbers raise concerns over a return to violence that Saudi Arabia has not seen since al-Qaeda's terror campaign in the early 2000s, which took the Saudi security forces years to thwart.

ISIS-affiliated extremists have already carried out more than 30 attacks in Saudi Arabia over the past two years. These were attempts to provoke sectarian conflict. They targeted mosques belonging to different religious sects, including the Twelver Shia, who are concentrated in the eastern province of the kingdom, as well as the Ismaili sect near the Saudi border with Yemen.

Nevertheless, as many governments restrict the return of jihadi fighters, Saudi Arabia is trying to bring Saudi militants back home.

One reason Riyadh wants to do this is to cut any links between extremist groups abroad and their agents within Saudi borders. They also want to stop the growing outflow of citizens to conflict zones, a source of international embarrassment for the country. Given the fact that Saudis are often over-represented in jihadi campaigns around the world, this feeds allegations that the country exports Islamic extremists. But more importantly, Saudi Arabia fears that the more time young Saudis spend among radical groups, the more weapons and explosives training they will receive. This would increase the possibility of Saudi citizens engaging in attacks, should they get the chance.

Saudi Arabia has long suffered threats from extremist militants, who have been involved in suicide attacks after returning home from jihadi battlefields abroad. In 1981, thousands of Saudis flocked to help the Arab-Afghan Mujahideen in Afghanistan fight Soviet forces. Freshly graduated from training camps, they launched deadly attacks against oil establishments and expats on Saudi soil. A similar scenario repeated itself after a new generation of jihadis returned from Iraq in the 2000s. Saudi security forces managed to stem the tide of attacks, but the sanctions imposed on those involved were not enough to eradicate their extremist, and violent, ideology.

As many governments restrict the return of jihadi fighters, Saudi Arabia is trying to bring Saudi militants back home.

This has prompted Saudi Arabia to adopt a 'soft power' strategy, rehabilitating terrorist suspects in prison. The Saudi authorities have invested 367 million dollars so far in deradicalization centers and counseling and therapy programs, to reintegrate ex-jihadis into society. The government's approach also includes counseling for citizens who are not necessarily involved in terrorism, but appear to hold extremist religious views, or who are liable to be misled by other radicals onto the jihadi path. The government believed that education, rather than punishment, would reduce the risk of former jihadis going back to extremism.

However, though the three rehabilitation centers across Saudi Arabia have supported approximately 15,500 people since 2007, the strategy is not foolproof. About 15 per cent of those prisoners, once released from rehabilitation, returned to conflict zones, or became involved in attacks. At the same time, a number of Saudi women have also joined extremist groups abroad in recent years. So far, some 46 are believed to have made the journey since 2011.

Given these statistics, Saudi Arabia had to shift recently from its persuasion-based strategy. As such, the government has adopted a number of strict anti-terrorism measures. These include allowing authorities to punish those who joined terrorist groups overseas with up to 20 years in prison. In the wake of such regulation, Saudi courts issued rulings on a number of former jihadis who travelled abroad to fight in Syria, including a former member of the army. More recently, Saudi Arabia has cracked down on terrorist financing linked to charities, freezing 117 bank accounts. Authorities have also issued a list of groups deemed to be terrorist organizations. These include ISIS, Syrian al-Qaeda affiliate Jabhat al-Nusra, Hezbullah, and the Muslim Brotherhood.

A key obstacle in dealing with the flow of Saudi jihadis abroad is that many are recruited by extremist groups online, which is hard to control. The majority of Saudi jihadis traveling to conflict zones are under thirty; many of them have been encouraged to join the fight abroad through contacts made on social media. Data issued in 2015 by the Brookings Institute revealed that more than 866 active ISIS-supporting accounts appeared to be operating from within Saudi Arabia.

Public sympathy for jihadi organizations is another challenge. Saudi state media has recently tried to address this by broadcasting documentaries, interviews with former jihadis, and producing talk shows aimed at countering extremist ideology. A comedy sketch show called Selfie, aired this Ramadan, has controversially tackled and mocked religious extremism and sectarian issues, including the role of the religious police, whose power of arrest was recently stripped. Authorities hope that by engaging the media in the debate on radicalization, it will raise awareness and increase public cooperation with counter-extremism efforts.

However, rooting out the sources of extremism requires more than that. Recent jihadi assaults in a number of countries, including the deadly bomb and gun attack at an airport in Istanbul, show that radicalism is globally fed by extremist, religious ideology. Some Muslim countries, including Saudi Arabia, have been accused by some of exporting such ideologies. However, if those countries with 'Islamic weight' put their influence behind Islamic principles that speak of tolerance and pluralism, extremism will hopefully find no fertile ground in which to grow.