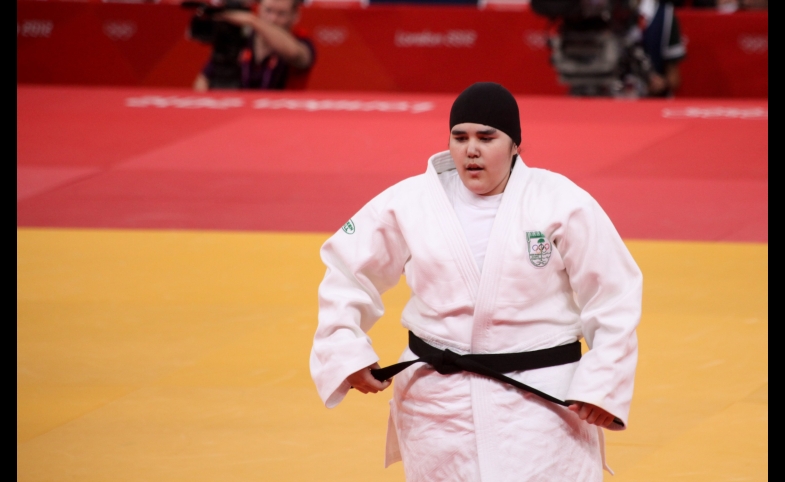 It is quite evident that Saudi Arabia has recently focused on improving its public image and reputation abroad, given its numerous attempts at opening itself to the international arena, and through diplomatic measures aimed at nursing the country’s image deficit. The role of women has surfaced at the forefront of its public diplomacy efforts. Taking advantage of its modest progress with womens’ rights domestically, Saudi Arabia has recently sought to turn the issue of women into an active soft power tool to influence foreign public opinion.

Four female athletes have been approved by Saudi Arabia’s Olympic Committee to participate in the Rio Olympics: Sara Al-Attar and Cariman Abu Al-Jadail in track, Lubna Al-Omair in fencing, and Wujud Fahmi in the under-52kg judo event.

The presence of Saudi women at the Olympics is a suitable occasion for reflecting on the advancement of Saudi women’s rights. But does this presence mean that Saudi Arabia has been committed to support role of women in sport at home?

In 2012, for the first time, Saudi Arabia sent two female athletes to compete in the London Olympic games. Arguably, since then Saudi Arabia has acted upon the idea that sport events provide a platform to raise public awareness of social developments that the traditional functions of embassies couldn’t always fulfill. This, however, is not to deny that pressure from the International Olympic Committee (IOC) to ensure gender balance did impact Saudi Arabia’s decision to send women to the Olympics. In fact, with Qatar’s decision to allow women athletes to compete in London in 2012 (which, along with Brunei, used to not have any female representation), Saudi Arabia would have risked isolation as the only country that excluded women from taking part in the games.

In combination with laws banning women from sport at schools, Saudi women face obstacles such as the ban against driving, and being subject to the “guardianship” system. This could suggest that Saudi Arabia is engaging in propaganda, rather than demonstrating a credible picture of an improved situation for women.

It can be argued that Saudi Arabia included women in order to improve public opinion in regard to the country’s gender policies, and also to reaffirm Saudi Arabia’s commitment to meeting the international convention of the elimination of all forms of discrimination against women, which Saudi Arabia signed in 2000.

Equally important was Saudi Arabia’s use of the Olympics to address the world about its domestic social transformation, showing that it had broken away from biased policies against women. This proved to be a soft power policy that used the participation of women to relay its political changes to a global audience.

Despite these efforts, Saudi Arabia’s attempt at influencing public opinion through female representation in Rio presents a paradox. First, Saudi Arabia's choice to send female athletes is a much greater symbol than the reality of what the country has managed to achieve so far for women’s rights, given the fact that women have no role in sport inside the Kingdom.

In combination with laws banning women from sport at schools, Saudi women face obstacles such as the ban against driving, and being subject to the “guardianship” system. This could suggest that Saudi Arabia is engaging in propaganda, rather than demonstrating a credible picture of an improved situation for women.

This suggestion is fueled by the Saudi General Sport Committee’s recent decision not to publish the names of its female athletes on its official website, which has created confusion about the Kingdom’s official position on women’s participation.

Journalist Amjad Al-Munif tweeted: “If the Sport Committee has deliberately neglected to list the names of female athletes, this contradicts the objectives of the National Vision2030, which seeks to empower women.”

It is evident that Saudi public diplomacy faces conflicts of opinion and interest originating within its various decision-making institutions. A lack of coordination between governmental agencies prevents the country from achieving its political goals to create a positive image abroad. One reason for intra-governmental conflict is that each official body has its own culture of governance and its own interests. Agencies generally have conflict due to differences in vision. For instance, some senior officials maintain the need to retain traditional Islamic values and preserve national identity based on privacy and the interpretation of religious principles. Often, they seek to attain these goals through their respective government agencies by promoting religion, scholars and fatwas. By contrast, other factions seek to modernize the state and focus their efforts on addressing society through cultural and media platforms.

These conflicts of interest can be illustrated by returning to the issue of women’s participation in the 2012 London Olympics. In Riyadh, few were in favor of sending women, based on an Islamic perspective. Such disagreements were in evidence as the Chief of the Saudi Olympic Committee said that women who wanted take part were free to do so, but the Olympic authority would only help in ensuring that their participation didn’t violate Islamic Sharia. In contrast, the Foreign Ministry favored sending women to participate, and saw it as an opportunity to increase global awareness of the Kingdom’s social progress. This was demonstrated in photos of Saudi diplomats in London warmly applauding women featured in the opening ceremony.

Attempts to modernize versus the desires of a largely conservative society have naturally failed to produce a single, well-defined vision of how the country ought to present itself to international audiences. As a result, Saudi society is divided between two intellectual paradigms.

The inclusion of women athletes in the Rio Olympics is a unique move by Saudi Arabia insofar as it used a non-governmental mouthpiece to project its growing efforts towards gender equality. Saudi Arabia’s modest success in showcasing its stance on womens’ rights has allowed it to avoid isolation. However, the country must address the gap between image and reality, which is diminishing the credibility of its public diplomacy efforts. This can be achieved by lifting the ban on women and girls in school sports, and creating further initiatives to support their role in sport.