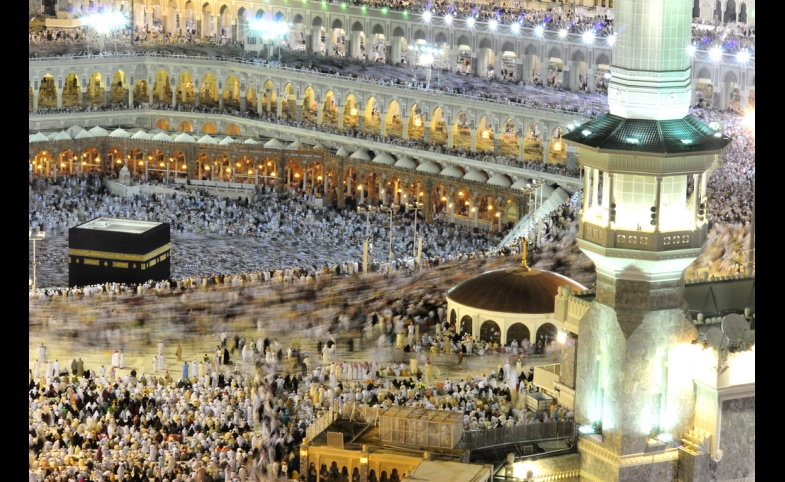 The term “smart power” refers to the strategy of combining “hard” and “soft” power resources to protect national interests and security. This policy, according to the Centre for Strategic and International Studies, emphasizes the need for a strong economy and military, but also stresses investing in alliances, partnerships, and institutions at all levels to expand the influence and legitimacy of state actions. This tactic is not just the prerogative of certain great powers or Western states, but it can also be developed by regional or emerging powers.

Saudi Arabia has a unique approach of vacillating between using hard and soft power. This approach is directly linked to Saudi Arabia being one of the wealthiest nations in the world, the home of the Islamic religion, and possessing vast oil reserves. Through these resources, Saudi Arabia has been able to advance its foreign policy interests as a form of smart power.

Being the site of the holiest places in Islam--Mecca and Medina--the Kingdom has made significant use of Islam as soft power to maintain national security and regional leadership in the Middle East and the wider Islamic world.

Simply by looking at the country’s flag, one understands that Saudi’s foundations are Islamic in form and content. The declaration of the Islamic faith (“shahada”) discloses that Islam is the kingdom’s primary component, and also affects the way in which it relates to other countries. This has manifested in different ways throughout modern history. For example, during the Cold War, Saudi Arabia opposed the Soviet Union for its atheistic nature. In addition, its Sunni interpretation of Islam has formed its opposition to the Shi’ite Iran over many political issues, such as the question of the civil war in Syria.

Internally, Islam is a source of political and moral values and is a key component of national identity. A tour of the capital, Riyadh, quickly reveals the power of religion over the social life in Saudi Arabia. Women are dressed conservatively in the ‘“abayah” and mosques dominate the skyline. In fact, Islam enjoys a level of tacit consent in most areas of life, including the population’s consent to the royal family’s rule and their application of Islamic Sharia law. Thus, it could be argued that underlying the soft approach lies a form of coercion, which could be deemed hard, considering that the application of Sharia is done also by force. In other words, the combinations of "hard" and "soft" elements of power form a unique blend in Saudi Arabia’s politics.

The Islamic identity of the Kingdom has endowed it with a level of credibility across the Muslim world. Over the last 80 years, Saudi Arabia has captured the “hearts and minds” of Muslims through its deployment of financial and human resources for Hajj, as well as funding organizations which support Islamic causes worldwide.

In the wake of the 9/11 attacks, some of these organizations have been criticized by western policy experts for allegedly supporting Al-Qaeda affiliated groups. Saudi Arabia responded to these accusations by tightening the controls over these organizations and their religious charity work in the Kingdom and other Islamic countries. The actions that Saudi Arabia has taken to overcome the accusations following 9/11 attacks highlights the extent to which Saudi Arabia deploys smart power, as these actions allowed it to negotiate with the West, as well as to continue cordial relationships with the Islamic countries which look to Saudi for financial and moral support.

While it can be argued that Saudi Arabia’s efforts towards the Muslim world originate from a feeling of Islamic solidarity, it is indisputable that these activities also aim to maximize its influence over the Middle East. In the last few decades, Saudi Arabia has assumed the role of mediator in regional disputes. It has been able to do so by using its spiritual and political weight. Recently, Saudi Arabia helped foster reconciliation between Qatar and Egypt.

Saudi Arabia has made significant use of its hard and soft power to achieve its goals. While its use of smart power has borne fruit in the Arab and Muslim world, it is questionable whether the same strategy will allow Saudi Arabia to win the hearts and minds of people beyond the Muslim world.

By mediating between conflicting countries, Saudi Arabia aims to protect itself from these conflicts. Saudi is plagued by a deep sense of insecurity driven by its sensitive yet strategic location, which is surrounded by political and military rivalries. Thus, it uses its role as a regional player to ensure the stability of itself as well as the regions’.

Saudi oil is integral to its smart power strategy for now, as it has been able to use it to extend its influence and create unprecedented levels of dependence from even some of the strongest countries, such as the United States. Saudi Arabia has managed to extend its influence to many poor countries across the world through its humanitarian assistance. In 2014 alone, Saudi Arabia donated over $5 billion to poor countries, including a $500 million donation to Iraq. Here, the Saudis surpassed the pledges of all European donors combined ($200 million). This highlights Saudi Arabia’s ability to reach out the many countries due to its large oil reserves. Proven Saudi oil reserves are the second largest in the world. It accounts for up to a fifth of the world’s total oil reserve. Saudi Arabia’s recent oil output is estimated to be 9.704 million barrels per day.

Saudi oil reserves have allowed Saudi Arabia to circumvent the unrest which has plagued many other Arab countries in the wake of the Arab Spring. For example, in the immediate wake of the Egyptian second revolution, Saudi Arabia granted $5 billion to Sisis’ government. Internally, Abdullah, the King has interdicted economic and social benefits worth over $130 billion. In doing so, Saudi Arabia used smart strategy to appease its people as well as to lend a helping hand to those forces that would seek to defend its interests in neighboring countries.

The Kingdom's oil reserves are of true global importance, particularly in the West. As one of the founding members of the Organization of Petroleum Exporting Countries (OPEC), it has pursued an oil pricing policy to ensure sustained development of the World economy taking into consideration the interests of both the producing and consuming countries. For this reason, Saudi Arabia has made many sacrifices, including maintaining costly additional productive capacity amounting to about two million barrels per day in 2012, seeking to support the world economy.

However, following the Kingdom’s decision to increase its oil production, this policy has changed. And the Kingdom’s began to use oil as a ‘hard’ power to accomplish economic and political interests rather than making concessions. The Saudi new oil policy reflect its desire to retain its share in the energy market, and also to inflict economic damage to its rivals, such as Russia and Iran, in which their policies do not please the Saudis or their Western allies.

Saudi Arabia has made significant use of its hard and soft power to achieve its goals. While its use of smart power has borne fruit in the Arab and Muslim world, it is questionable whether the same strategy will allow Saudi Arabia to win the hearts and minds of people beyond the Muslim world. For example, While Western governments might be positively inclined toward Saudi Arabia, their citizens do not see the value of positive relations.

Around 900,000 people from around the world traveled to gather in a small geographic area in Saudi Arabia earlier last year, a sharp decrease compared to the annual average of 2.3 million people pre-COVID-19 pandemic. Many...

Saudi Arabia’s Council of Ministers has approved a law that restricts the powers of the religious institution responsible for protecting Islamic morality in the country, the Commission for the Promotion of Virtue and the...

The Charlie Hebdo murders have reinforced anti-Muslim and anti-Arab sentiment that even when invisible always simmers just beneath the surface of public opinion in much of the West. Some prominent Arab news organizations...