To meet the challenges of the 21st century, the approach to public diplomacy will increasingly focus on smart networks of influencers who can convene, connect and mobilize communities. This collaborative approach will support and aggregate the impact of smart, committed individuals around the world.

Secretary Clinton’s article in the New Statesman articulates the art of smart power, recognising the ‘novel range’ of tools required when facing complex problems. The contemporary approach to smart power seeks to develop “new ways to reach beyond traditional government-to-government relations and engage directly with people around the world”. This Secretary Clinton writes, “means using technologies such as Twitter and SMS to open dialogues”.

It is certainly time, as Amy Zalman argues, for a new understanding of political power that reflects 21st-century realities and which does not limit “our ability to see new connections between ideas”. As a result, the focus on relational, connective or collaborative approaches is growing. R.S. Zaharna, argued recently public diplomacy is becoming more networked and U.S. public diplomacy would benefit from a new mindset which embraces both collaborative approaches and citizen diplomacy. In a similar vein, Anne Marie Slaughter has articulated the benefits of collaborative power.

Networks are made up of two or more connections between three or more points. What form they take and influence they may deliver will depend on both the points and the connections or in human terms, the individuals and the relationships.

Successful public diplomacy will engage individuals. However, the extent to which that strategy delivers any influence or impact will depend on both the nature of the individuals and the nature of their relationships. The structure of networks influences a range of behaviors, from development of innovation to adoption of health behaviors, or from finding a job to delivering a package - as shown in the iconic small world experiments run by Stanley Milgram. More recently, researchers at OII have analysed a geography of Twitter, while a study conducted by researchers from Facebook & Università degli Studi di Milano, Italy identified the active user network on Facebook of around 721 million users and 69 billion friendship links.

To have influence within huge interconnected networks, future public diplomacy strategy is likely to be based on an analysis of the complex architecture between communities around the world. This will require public diplomats to recognize where conversations around specific issues are happening, understand the communities having those conversations, and identify those influential within them.

As the commonly termed ‘Arab Spring’ progressed, the social media space was buzzing with claims of a social media revolution. As large street protests and violent clashes with security forces continued, online discussions and comments about the events spiked. The image below visually represents Twitter activity during the ‘Arab Spring’ focusing on content containing at least one of the #tags associated with the protest movements.

Highlighted on the image are individuals and organizations on Twitter who were leading producers of content that was subsequently shared during the wave of protests in the Middle East. The process allows the relative importance of particular "information brokers" to be identified, based on the degree to which other individuals shared (re-tweeted) content from those sources. What we found was not one massive many-to-many conversation but lots of few-to-few interactions between relatively small communities. 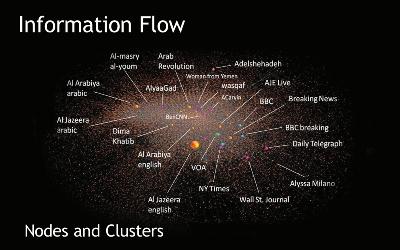 As a result of the few-to-few interactions, information nodes are close together in the network if their content was re-tweeted by similar combinations of users. This accounts for the cluster of Arabic-language sources on the left of the graph. Individual journalists also appear to have had important roles as information brokers - for example Dima Khatib, Latin American Bureau Chief of Al Jazeera, and Andy Carvin, a senior strategist on the social media desk at Washington, D.C. based National Public Radio.

This is an example of how network analysis can help identify key individuals and the predominant concerns of the broader online communities in which they operate. Public diplomacy organizations seeking influence can use such tools to identify communities they wish to support and understand the key concerns of those communities. From this insight public diplomats will locate paths which will increase the likelihood meaningful connections will develop with the community with which you wish connect. In doing so they will have the potential to use technologies such as Twitter and SMS to open dialogues, develop collaborative approaches and participate in smart networks of influence to face the complex challenges of the 21st century.