Home|A Summer with the LA Mayor's Office of International Affairs 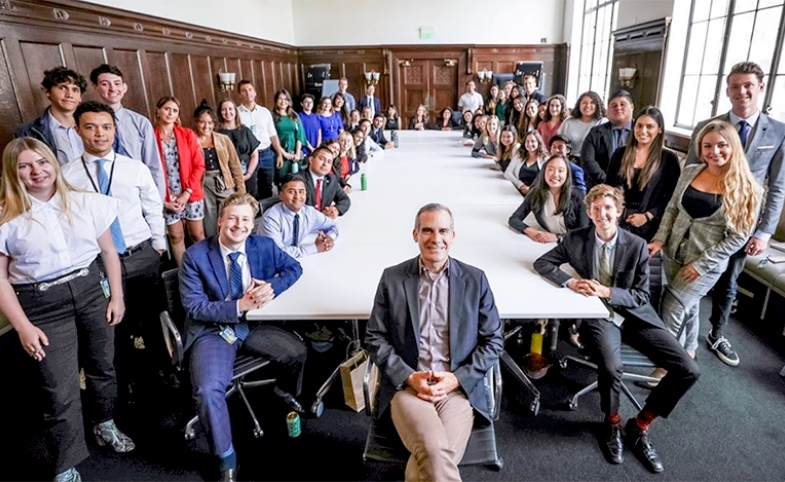 A Summer with the LA Mayor's Office of International Affairs

In 2016, I decided to embark on a life-altering journey into the unknown. I moved to Rome to spend my freshman year attending John Cabot University. Not only did I return with lifelong friends, plenty of stamps on my passport and a craving for authentic carbonara—I also returned with a whole new perspective of the world. Rome is a city that incubates creativity, development and self-realization. A stroll through any given street showcases these ideas through the magnificent character of the architecture, the repurposing of ancient structures and the people you pass by from day to day.

My time abroad freshman year gifted me with the development of a global perspective; I realized how decisions made by one city or country can affect the rest of the world. My experience in Rome, especially during the 2016 U.S. presidential election, combined with observing how Rome, in particular, approaches the refugee crisis, lead to my decision to study international relations upon my return to the United States and to USC.

I was lucky enough to have this experience early on in my college career which, in turn, paved the way for my academic career. My new path is what led me to becoming the USC Center on Public Diplomacy's Summer Associate at the Mayor's Office of International Affairs (MOIA) this past summer.

During my time at MOIA, I was able to work for the International Relations Policy and Protocol team, which runs the Mayor’s Young Ambassador program (MaYA). MaYA is an initiative that sponsors and fully funds community college students to travel abroad. The goal of the program is to help foster students’ international perspectives through international travel, meetings with foreign government officials and participation in community service projects. I was excited to be working on projects for MaYA given how impactful my own study abroad experience was.

My time at MOIA has taught me the importance of Los Angeles as a global city. By creating MOIA, Mayor Garcetti has shown the important role cities can play on a global scale.

Prior to this position at MOIA, I had no idea the level of the commitment Mayor Garcetti has for growing students’ perspectives in order to encourage engagement with the global opportunities within the city of Los Angeles. I view providing opportunities for the youth to grow their presence as a crucial component to a successful city.

Furthermore, during my time at MOIA, not only was I able to witness the office’s devotion to younger Angelenos, but also to its devotion to maintaining its repertoire as a global city. On my first day of work, I had the opportunity to greet the Mayor of Tel Aviv and escort him to Mayor Garcetti’s office. This was a special experience that I will never forget.

Relatedly, I also participated in meetings with officials from the Paris Olympic committee. At these meetings, officials were able to share their experience regarding the challenges Paris is currently facing in preparation for the 2024 Olympics. These perspectives were greatly welcomed as they provided important insights for Los Angeles as it plans for the 2028 Olympics.

The Mayor's Office values the many forms of connecting with international cities: activities such as forming networks with other cities around the world for economic and business purposes, and even preparing for the world to be welcomed to Los Angeles for the 2028 Olympics. On the other side of the diplomacy circle, the Mayor’s office is fostering international understanding by giving young Angelenos the opportunity to travel abroad and strengthen Los Angeles’ ties with global cities and their students. The Los Angeles Mayor's Office's efforts in international affairs are making a difference in improving the quality of life in Los Angeles and the world.

My time at MOIA has taught me the importance of Los Angeles as a global city. By creating MOIA, Mayor Garcetti has shown the important role cities can play on a global scale. I am excited to be continuing working in the Mayor's Office of International Affairs on the International Trade Team this semester.

City Hall Is the Best Prep for the White House

Note from the CPD Blog Manager: This article was originally published by Foreign Policy here and is re-posted with permission. Learn about CPD's latest research on city diplomacy here. In the days...