Home|Trafficking of Women on the Burma-China Border: Why the International Community Should Care About the Conflict in Kachin State 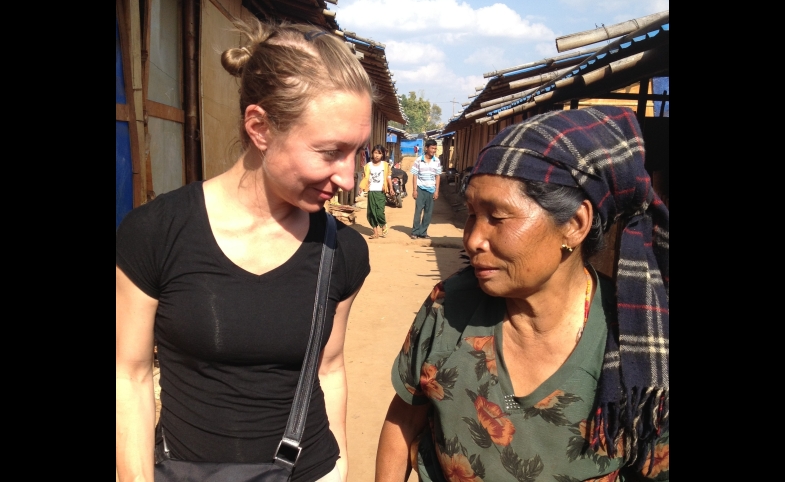 Trafficking of Women on the Burma-China Border: Why the International Community Should Care About the Conflict in Kachin State

In recent weeks, warfare in Burma’s Kachin State has increased and is now making its way closer to the Burma-China border. While the international community has paid little attention to the Kachin conflict over the past few years, understanding its complexity is now more important than ever. Failing to do so could have dire implications on the lives of Kachin women, and on diplomatic relations in the region.

Kachin State is an ethnic area in northern Burma that has long suffered from conflict with the central Burmese government. In 2011, a seventeen-year cease-fire was broken, resulting in the onset of active warfare. In spite of ongoing attempts at peace negotiations, the Burmese government has been committing atrocities-- including rape, arbitrary arrest and torture-- against civilians. The region has been documented to be an active conflict zone resulting in one of the worst humanitarian crisis’ in the world. According to reports issued by the Kachin Independence Organization (KIO)—the political arm of the Kachin people-- over 100,000 internally displaced persons (IDP’s) have fled to border areas of Burma and China to escape the fighting, and these communities suffer from a lack of basic necessities and little to no foreign aid. Additionally, as the Kachin Women’s Association of Thailand has documented, the trafficking of women into China’s neighboring Yunnan province as forced brides has become a growing problem.

Recently, I traveled to Mai Ja Yang, the second largest city in KIO-controlled territory to interview women and men living amid the conflict about the issue of trafficking. I conducted interviews with over 25 trafficking survivors, female soldiers, CBO women’s organizations, lawmakers, cultural leaders, IDP relief workers and administrators from the KIO. I was hosted by the Kachin Women’s Association of Thailand, an organization actively working on the issue.

My research revealed that gender discrimination, demand from China for brides due to the one-child policy and crippling conditions on the ground due to the military conflict within Kachin State contribute to the problem of trafficking. As former “forced brides” and others reported, the escalation of the military conflict has resulted in a sharp increase in irregular migration. Simultaneously, trafficking has become less of a priority for the KIO government, whose attention is focused on war strategy and the political process, rather than the empowerment of Kachin women.

Now, the Burma army is stepping up its attacks in a move that could increase women’s vulnerability to trafficking. As a recent article in the Irrawaddy Magazine revealed, last week the army launched an attack on a KIO military outpost near Mai Ja Yang, which shares its eastern border with China’s Yunnan province. Mai Ja Yang is home to a growing number of IDPs—men, women and children who have had to flee their homes after their villages were raided. Now, not only are these people’s homes destroyed, but their temporary camps are in danger, as well.

With fighting approaching the border areas, women living in the camps could become even more vulnerable. These women face insecurity in the form of food shortage, lack of infrastructure and basic sanitation. They also face circumstances of gender-based violence and rape. Additionally, lack of a means of income generation influences women to migrate to China to find work—a situation that leaves them vulnerable to labor exploitation and trafficking.

But the international community has been slow to respond to the conflict. As a recent Stimson Report revealed, the precarious nature of the U.S-China relationship has given American leaders pause in "interfering" in such a sensitive geo-political arena. Additionally, aid workers report having had difficulty accessing the IDP camps due to the ongoing warfare in surrounding areas.

Despite these cautions, it is in the interest of the Chinese, Burmese and Kachin governments to quell an increase in trafficking. Doing so would not only improve the lives of thousands of women, but it could prove beneficial for each country’s relationship with the United States. This is because the U.S. State Department has made trafficking a primary agenda in its international policy. In fact, the State Department’s Trafficking In Persons (TIP) Report ranks every country in the world according to how well they comply with the U.S. mandate against human trafficking. As a result, in recent years trafficking has become a number one priority on the U.S. government’s agenda.

The policies associated with the U.S. government’s anti-trafficking mandate aren't always beneficial for the women they're intended to help. As I discuss here, the State Department sometimes gets it wrong, and trafficking continues to escalate. In the case of Burma and China, however, the U.S’s mandate could actually serve a useful — even diplomatic — function. Due to the transnational nature of human trafficking, cooperation between governments in the region is essential for the development and implementation of a robust anti-trafficking policy. Collaboration between the Chinese government and KIO, for example, is needed to resolve trafficking cases and bolster prevention efforts on both sides of the border. As wary as the U.S. government is of getting involved in these relationships, the trafficking issue could potentially be an inroad yielding productive results.

Thus far, however, the only people seriously trying to combat trafficking along the Burma-China border are a handful of brave and talented activists on the ground. Mai Ja Yang is home to a number of women’s organizations dedicated to increasing the political and civil rights of women in Kachin society. These women work at great personal risk, while the Third Brigade of the KIA works to maintain their security.

But these organizations can only accomplish so much without international support. Instead of turning a blind eye to the conflict, Western governments should help them develop a robust anti-trafficking policy for Kachin State. Additionally, the U.S. government should put pressure on the Burmese and Chinese governments to de-escalate the conflict in KIO-controlled areas. Failing to do so could not only exacerbate the precarious nature of diplomatic ties in the region, but it could lead to an increase in victims of human trafficking — the very people the U.S. government says it is trying to help.

Erin Kamler
CPD Blog Contributor
PhD Candidate, USC Annenberg School for Communication and Journalism
YOU MIGHT BE INTERESTED IN...