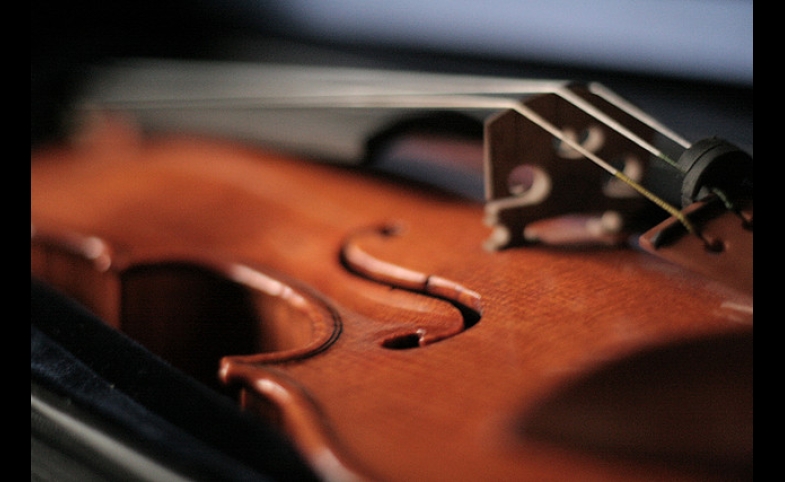 We Need More Than A Violin To Connect Argentina and Myanmar

What do the U.S., Argentina, Afghanistan, and Myanmar have in common? This summer, two opportunities enabled me to explore this question from my perspective as an American violinist who recently moved to Argentina from Afghanistan. At the end of May, I conducted my own arrangement of an Afghan folk song at the music festival Iguazu en Concierto in Iguazu Falls, Argentina. In June, I was a guest artist at the first Myanmar Music Festival.

At Iguazu Falls, I reunited with a group from the Afghanistan National Institute of Music (ANIM), where for four years, I taught violin and conducted the orchestra. I saw Iguazu as an opportunity to introduce my Argentinean and Afghan students to each other. Would they get along?

Sure enough, one of my students from San Juan, a tranquil town famous for its wine, learned enough Dari to exchange basic greetings with the Afghan students. “I didn’t know what I’d think of them, because on TV, we only see angry bearded men when we hear about Afghanistan,” she told me. “But we got along just fine.” One day, as students lounged on the grass near the stage overlooking the awe-inspiring waterfalls, the Afghans got out their rubab (a lute-like instrument) and dhol (drum) to play a popular folk song, and it wasn’t long before students from Peru and Paraguay gathered around to watch a couple Brazilian guys dance to the beat.

Brazilian students dance as Afghans play at Iguazu en Concierto, a music festival in Argentina, 29 May 2014. Photo reprinted courtesy of the author.

Shortly after returning to San Juan, I grabbed my violin and headed out on a 20,000 kilometer journey to Yangon (via Buenos Aires, Dubai, and Bangkok). Can music unify a Myanmar still emerging from a half century of military rule? It has helped unify post-Taliban Afghanistan, both through the nationally televised singing contest, Afghan Star, and the February 2013 tour by the Afghan Youth Orchestra, which I conducted. Sold-out concerts at the Kennedy Center and Carnegie Hall on that tour became a source of pride for many Afghans.

I had to speak right after her; a tough act to follow! Before playing an Afghan song, I stated: “Afghanistan, like Myanmar, searches for a way to build unity while celebrating diversity. I was honored to work for and with those Afghans who saw music as an essential part of this quest, and I hope that here in Myanmar, the people of this extraordinary nation find that the power of music, art, and culture helps build the path towards prosperity, liberty, and peace.” 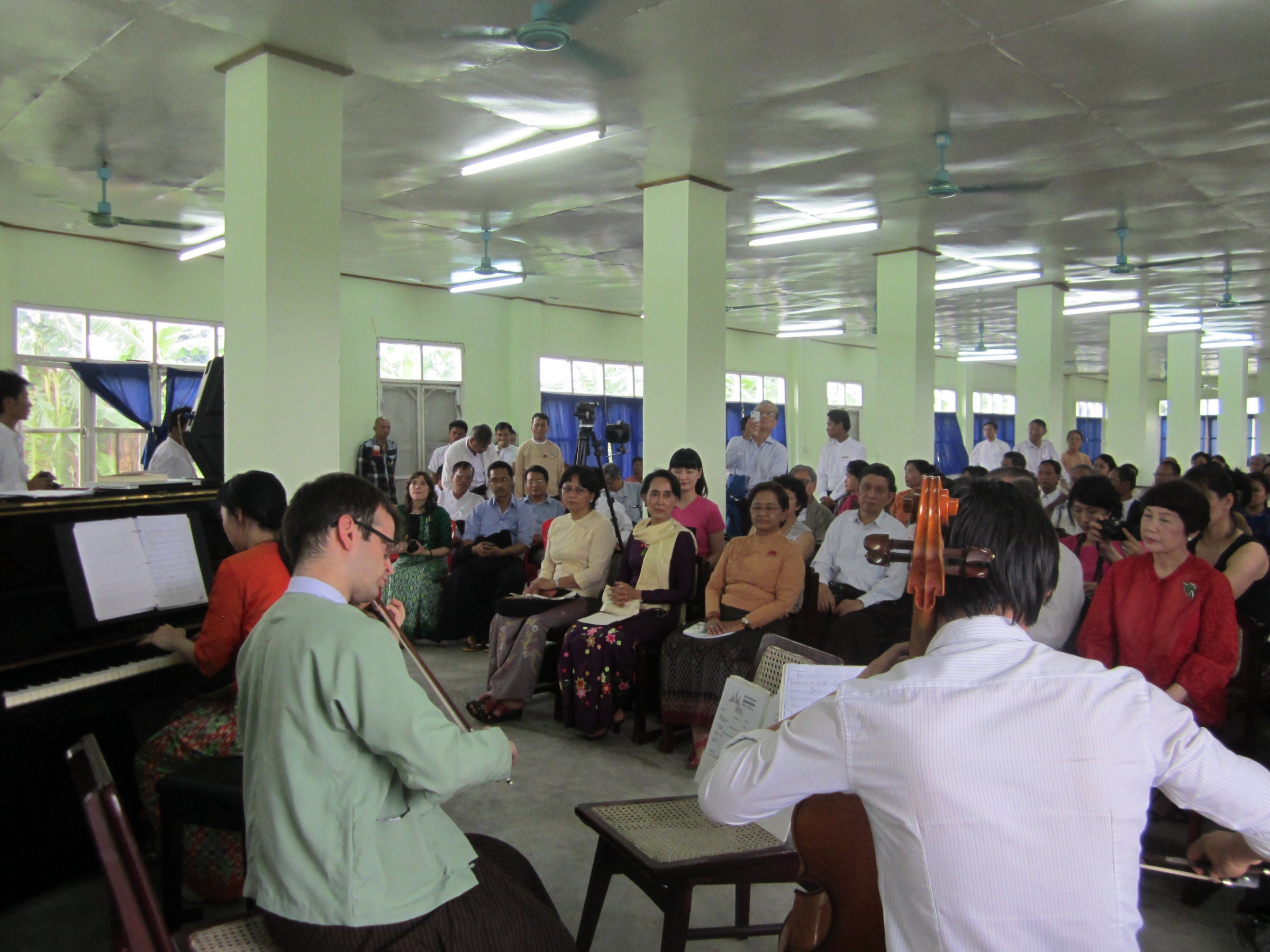 Musicians from Taiwan, the U.S., and Myanmar play for Nobel laureate Daw Aung San Suu Kyi as part of the Myanmar music festival, June 23, 2014. Photo reprinted courtesy of the author.

It can be entertaining to search for the connections between countries which may seem to have little in common: At a reception following a concert at the family home of former UN Secretary-General U Thant, the wine came from Argentina. Western classical musicians from Myanmar enjoy the music of the late Argentine composer Astor Piazzolla. My colleagues in San Juan wanted me to bring back spices.

Yet there is a deeper reason to encourage multilateral exchanges such as the vibrant, fun hodgepodge of cultures at Iguazu en Concierto, or the intense week of concerts in Yangon featuring musicians from Taiwan, the U.S., Switzerland, and Myanmar. We live in a world where globalization erases barriers faster than we can empathize with those on the other side of them. How do we address this?

I have been thinking a lot about multilateral cultural diplomacy since July 2013, when the NGO I founded in 2005, Cultures in Harmony, conducted a project in Belize. Most of our projects are in Muslim-majority countries, such as a concert tour of schools in Pakistan or workshops for young musicians in Tunisia. However, when the National Institute of Culture and History invited Cultures in Harmony to come to Belize, I was happy to accept, and used the opportunity to promote the fast-disappearing culture of Belizean brukdong music.

After a lunch of fish overlooking the Caribbean, a drummer asked me where I would go next. I told him about our tour to Cameroon, where we would perform alongside Cameroonian and Nigerian musicians in prisons, orphanages, and a home for lepers. “I’d like to come,” he said. Why shouldn’t he? Belize and Cameroon may be on opposite sides of the Atlantic, but share much in common, thanks to the African heritage of most Belizeans. 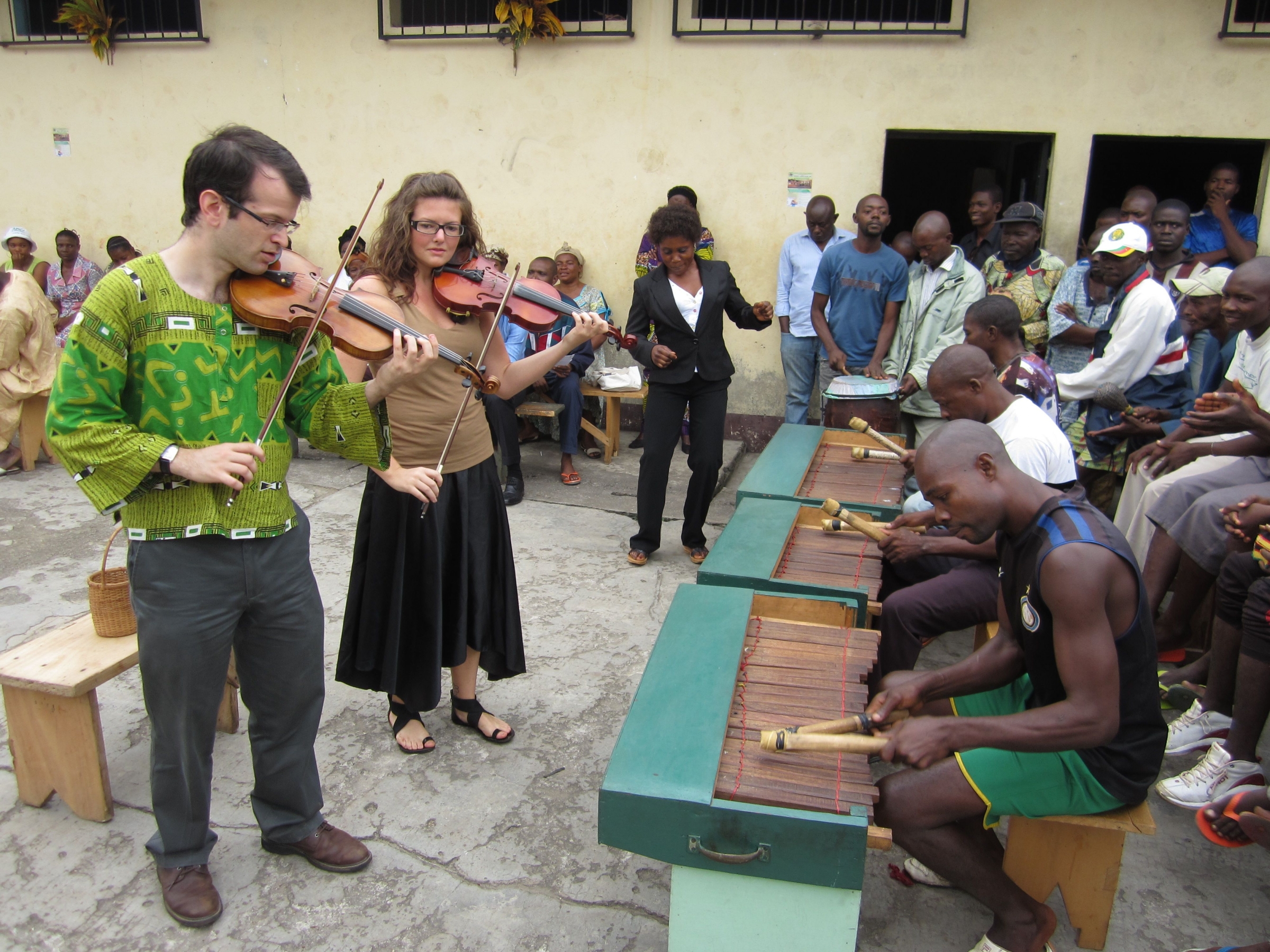 Cultures in Harmony plays with the prison marimba band at Mfou Central Prison in Cameroon, July 31, 2013. Photo reprinted courtesy of the author.

But who would fund and organize a Belizean drummer’s trip to Cameroon? The governments of Belize and Cameroon might not have the resources. Traditional cultural diplomacy institutions like the British Council and the Goethe Institute focus on bilateral exchanges, as do smaller NGOs like Cultures in Harmony. Both Iguazu en Concierto and the Myanmar Music Festival deserve support and recognition from an entity dedicated to the basic premise that peaceful exchanges among peoples from all countries have value.

Various countries and NGOs have initiated admirable bilateral cultural diplomacy projects, but what we really need is for donors with deep pockets, perhaps in Doha, Dubai, Mumbai, Los Angeles, New York, or London, to create a nongovernmental, global fund for multilateral cultural diplomacy projects. We need this not in order to improve the international image of the countries that can afford to do so, but because a world riven by multilateral conflicts needs the bridges multilateral exchanges could build. Such a fund could support projects like Iguazu en Concierto and the Myanmar Music Festival, as well as many other projects its existence might catalyze.

So: what do the U.S., Argentina, Afghanistan, and Myanmar have in common? At concerts in all those countries, I’ve seen music remind people that we share more than we think. We need to celebrate that more often.

Music has been used throughout the years as a medium for self-expression and social cohesion not just between individuals, but also between communities and nations themselves. This form of cultural diplomacy enables messages...