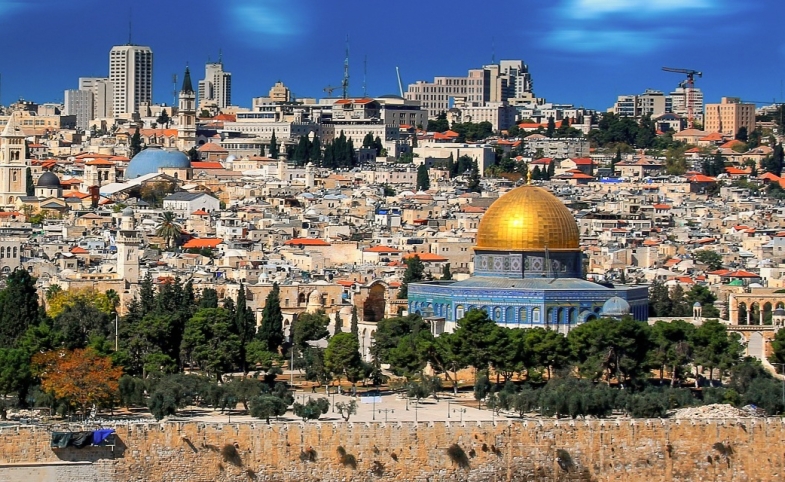 Trump's announcement has been labeled as historic by most Israeli politicians. The President, the heads of all coalition parties and the heads of opposition parties have all stated that Trump gave Israel a magnificent gift for its 70th anniversary. Even ardent critics of Trump's policies could not hide their excitement nor pretend that his statement was not a seminal one, a statement that represents a departure from 70 years of U.S. foreign policy, and 20 years of U.S. peace efforts.

Indeed since the early 1990s, U.S. administrations have consistently stipulated that the status of Jerusalem could only be determined in a peace agreement between Israel and Palestine. U.S. Presidents believed that withholding recognition of Jerusalem as Israel's capital would motivate Israel to make concessions vis-à-vis the Palestinians. When asked if Trump's policy departure could impede peace talks between Israel and Palestine, all senior Israeli politicians offered a similar answer: what peace talks?

While Israeli politicians have greeted Trump's announcement with excitement, Israeli diplomats have been more reserved as Jerusalem's new status presents them with several challenges.

The first of these is additional strain on already-strained relationships with Egypt and Jordan. In the hours following Trump's speech, Israeli and American flags were burned on the streets of Cairo and Amman, while high ranking officials said that Trump's actions threaten the stability of the region. Presently, Israel's Ambassador to Jordan is a persona non grata, while the Israeli embassy in Cairo is operated out of the Ambassador's residence. While the Egyptian and Jordanian regimes share security interests with Israel, both remain committed to Palestinian statehood.

From a public diplomacy perspective, Israel must now alleviate the pressure on Jordanian and Egyptian leaderships by assuring the people of both nations that Israel remains committed to peace and Palestinian statehood.

Moreover, both regimes face increasing pressure from their citizens to sever ties with Israel and to end the Israeli occupation of Palestine. These calls have only intensified since Trump's statement on Jerusalem. From a public diplomacy perspective, Israel must now alleviate the pressure on Jordanian and Egyptian leaderships by assuring the people of both nations that Israel remains committed to peace and Palestinian statehood.

The second challenge facing Israeli public diplomacy is encouraging other countries to follow Trump's example. To this end, all Israeli ambassadors were officially tasked on Thursday with opening negotiations with foreign governments on relocating their embassies to Jerusalem. Thus far, only the Czech Republic has followed Trump's suit, recognizing Jerusalem as Israel's capital. Like Trump, the Czech President announced that his country's embassy will relocate to Jerusalem at a future date. It is unlikely that other governments will adopt similar policies. Throughout Europe, Latin America and Asia, governments still view Jerusalem's status as an issue that can only be resolved through a peace agreement and as a lever to be used when promoting peace efforts opposite the Israeli government.

Notably, Trump's statement may actually complicate matters for Israeli public diplomacy by instigating a global discussion on Jerusalem's status and strengthening opposition to Trump's policy. Thus far, both the EU and the UN Security Council have scheduled emergency sessions to debate the ramifications of Trump's statement and to discuss Jerusalem's future status. Each of these forums could adopt resolutions stating that Jerusalem is not Israel's capital. Similarly, French President Macron argued adamantly that he does not agree with President Trump and that recognizing Jerusalem as Israel's capital is a violation of international law and UN resolutions. Israeli public diplomacy may therefore soon find itself on the defensive, fighting off attempts to delegitimize Israel's claim over Jerusalem.

Finally, Israeli public diplomacy will have to prevent possible pro-Palestinian initiatives by foreign governments. Some governments and multilateral forums are likely to offer the Palestinians symbolic tokens be it in an attempt to salvage the peace process or the cause of Palestinian statehood. For instance, some governments may recognize East Jerusalem as Palestine's capital while others may recognize Palestine as a sovereign country. Additional tributes may include bans on products from Israeli settlements and support of Palestinian resolutions in multilateral forums. Each of these would constitute a major blow to Israeli diplomacy.

In an attempt to overcome the aforementioned challenges, Israel has adopted a two-pronged strategic narrative.

The first component of Israel's narrative stipulates that Trump's recognition of Jerusalem will actually facilitate peace as the future of Jerusalem was an obstacle on the road to reconciliation. Now that Jerusalem has formally been recognized as Israel's capital, Israeli and Palestinian negotiators can move on to other obstacles. This argument has been repeated by Israeli politicians over the past 72 hours. Even hawkish members of the Netanyahu government, such as members of parliament from the Jewish Home party, have given interviews to foreign media stating that true peace can finally be achieved. It is this component of Israel's narrative that is meant to prevent pro-Palestinian gestures by foreign governments, and facilitate wider recognition of Jerusalem's new status.

The second component of Israel's narrative states that Israel will continue to allow freedom of worship in Jerusalem and will maintain the status quo of all holy sites in the city. It is this component that is meant to assuage Egyptians and Jordanians as well as Muslims around the world. Moreover, this component is meant to counter calls by Hamas leaders to take up arms in defense of Jerusalem.

It is, however, unlikely that the Israeli strategic narrative will be able to stem the tide of discontent in the region, and around the world. If Israeli diplomacy is to overcome the challenges that lie ahead, the Israeli government must demonstrate an actual commitment to peace and dialogue with the Palestinian leadership. This will have to include an immediate return to the negotiation table, an official endorsement of the Two States Solution by the current government and increased freedom of movement in the occupied territories.

That, too, is unlikely is to happen.

In 2011, the U.S. State Department launched Virtual Embassy Iran, a web-based platform that aimed to promote American “values and culture” to Iranians. This embassy served as an example of how diplomats can use digital...

Gaza Rockets and “Brand Palestine” - A View from a Jerusalem Café

I’m sitting in a café in Jerusalem’s posh German Colony, an area of town reminiscent of Boston’s Newbury Street, on a lovely, if a touch excessively warm, summer Friday morning. As I’ve been here for a month doing archival...

"Dialogue of the Deaf: A discussion in which each party is unresponsive to what the others say." -The Oxford English Dictionary The past two weeks have seen the onset of a new cycle of violence between Israel...