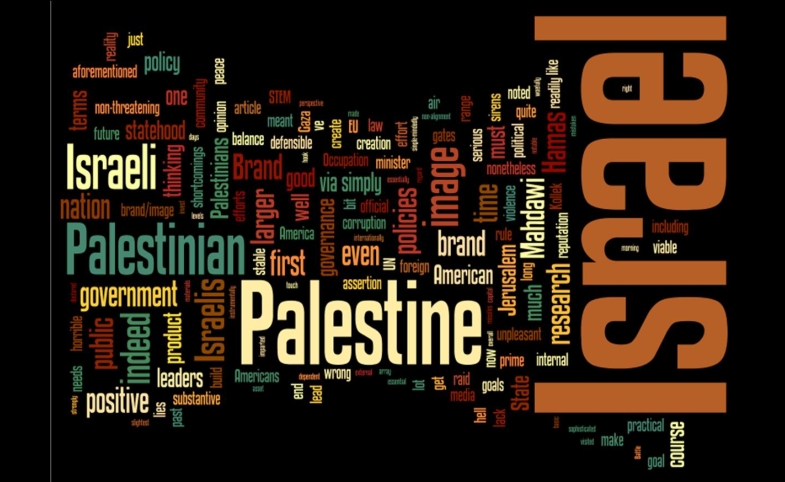 Gaza Rockets and “Brand Palestine” - A View from a Jerusalem Café

I’m sitting in a café in Jerusalem’s posh German Colony, an area of town reminiscent of Boston’s Newbury Street, on a lovely, if a touch excessively warm, summer Friday morning. As I’ve been here for a month doing archival research for my next book, Cast a Giant Shadow: Israel’s Image-Building efforts in America 1948-78, I’m thinking a lot about nation branding. But at the moment, I’m thinking less about Israel’s image and “brand” in the U.S. than I am about Palestine’s.

The lens through which I’m peering right now is the latest armed imbroglio between Israel and Hamas, and my focus has been adjusted, shall we say, by the past couple of evenings, in which I’ve been summoned twice so far to head for shelter by air raid sirens that sound uncannily like the wail of the looming cyclone in the 1939 MGM musical The Wizard of Oz. For the record, here in West Jerusalem it’s not exactly London during the Blitz — that’s much more the case in the Israeli towns of Sderot and Ashkelon, which abut the Gaza strip, as well as of course Gaza itself — but it is all a bit disquieting nonetheless.

During the last Gaza-Israel exchange of missiles in 2012, American PR professional Arwa Mahdawi observed in the U.K. Guardian that since its creation in 1948, Israel had worked assiduously to create what she calls “Brand Israel” — a basically correct assertion, I can attest after extensive research in the relevant files of the Israel State Archives, even if she was quite wrong about the range of actual themes underlying the Israeli brand/image (but that is a subject for another time). She declared that Palestine “should be following Israel’s lead in a more sophisticated approach towards nation-branding.” However, Mahdawi lamented, the “Palestinian messaging currently being most amplified by media consists of Hamas’s crazed proclamations about ‘gates of hell’” and she dryly noted that this language “curries no favor for the broader, moderate Palestinian community.” Mahdawi concluded her piece with the exhortation that “if there is ever to be a Palestine there needs to first be a ‘Brand Palestine.’”

I’m inclined to agree with Mahdawi’s assertion, but with a very serious reservation: a nation’s positive brand, image, reputation, what have you, must be thoroughly grounded in an observable, defensible reality — and it must on balance be, well, positive. This does not mean it needs to be perfect. Indeed, it can and likely will contain glaring imperfections, unless you’re talking about innocuous states like Denmark, Botswana and New Zealand — but the ledger must ultimately be in the black. And you have to have achievements to point to, the more dramatic (including a pronounced lack of drama, e.g. notable peace, stability and comity), the better.

Herein lies the core problem for constructing “Brand Palestine,” both in absolute terms and measured, as Mahdawi and others inevitably do, against Israel’s brand. A Palestinian official asserted in a 2005 Economist article, “Israel and Palestine: The Battle for Public Relations,” that “The Israelis have a horrible product but they spend a lot of time in marketing, whereas the Palestinians have a really good product, but we invest nothing in selling it.” Arwa Mahdari, I will note, quotes this article but omits the first clause about Israel’s “horrible product,” either because she realizes it sounds unpleasant or knows it is simply wrong.

I have been quite critical in the past of Israel’s substantive and reputation-management shortcomings, so I feel comfortably insulated from possible charges of bias in asserting that Israel on balance has long possessed a formidable array of brand/image connotations, even in the dark shadow of the Occupation, which of course did not exist during the Jewish State’s first two decades of independence.

Indeed, even some of those aspects of Israel’s image that at first blush convey a negative connotation nonetheless are a double-edged sword. A very incomplete image list includes, for example, a nation hewn against great odds from rude and unpromising materials; a haven for a people decimated by the worst genocide in recorded history; a thriving albeit imperfect democracy, leaving egregiously aside the human rights outrages of the Occupation; related to that, generally accountable government and reliable rule of law that can send a former prime minister to prison for corruption; a global high cultural powerhouse, as anyone who has visited the Israel Museum or heard the Israel Philharmonic will readily acknowledge; Israel’s leadership in higher education, especially STEM research and applications embodied in the slogan “start-up nation;” a military-defense establishment that renders Israel the regional superpower, including — not simply in spite of — the Israeli nuclear deterrent; and a consistent pro-Western orientation, even if Israel played a bit at non-alignment during the early Cold War and walks a fine line with Vladimir Putin’s Russia today.

None of this is meant to minimize the significant problems in Israeli society and policies, internal and external, that damage Israel’s reputation. But in the United States, the only overseas brand/image/reputation game that matters for Israel (sorry, E.U. and U.N.), all of the aforementioned have imparted to Israel an enormous store of good will and political capital that has long helped the country to weather criticism, much justified and some not, of specific Israeli policies and foibles.

My research confirms that from its earliest days the Israeli government labored with the utmost diligence to create an apparatus with which to shape and influence U.S. opinion, and to build a range of relationships in America with politicians, policy formulators, opinion leaders and other influential figures, and the public-at-large. As Teddy Kollek, at the time a key Israeli foreign policy formulator, put it in a 1950 memorandum to a colleague, “[O]ur future with regard to the U.S. lies wholly with the public and is dependent to a much lesser extent on our diplomatic relations.” “Practically our whole foreign policy,” Kollek declared emphatically, “stands or falls with the success” of Israel’s American outreach program. But all of this effort would essentially have been for naught if Israel’s basic narrative, so to speak, were not preponderantly positive and defensible.

Which brings me back to air raid sirens in Jerusalem — and Tel Aviv, Haifa, Beer Sheva, Rehovot, et cetera. This time Hamas has demurred, at least for now, from any “gates of hell”-style media frothing. But Americans and Israelis alike are left to puzzle over just what Hamas’s leaders are thinking, what they are doing, and what larger purpose any of this serves, over its utter strategic ineffectuality. They are also left to consider how it all problematically fits into a larger image of Palestinian inability to work instrumentally, single-mindedly and, most important, effectively to formulate policies and build governance structures that will lead to the creation of a viable, stable, democratic and pluralistic, prosperous and non-threatening State of Palestine underpinned by good governance, accountability, and the rule of law. And of course, a Palestine that speaks with one voice in its resolve to achieve a final peace agreement with Israel that both sides can live with.

This is not to say that no serious effort has been made by Palestinian individuals and institutions on any of these things; nor is it meant to let the Israelis off the hook for their more than occasional obstreperousness in the negotiating process, or for any of Israel’s other shortcomings. But to be brutally clear-eyed, Palestine has to date accomplished none of the aforementioned ostensible goals, individual and corporate efforts notwithstanding.

Palestine’s preponderant image in the U.S., as well as in Israel, is in the main that of a self-destructive mendicant proto-state that places posturing before development; of a riven populace and government, with accompanying internal political and social instability; of pointless and indeed supremely counter-productive violence, where the goal seems more one of lashing out and revenge than of achieving any practical objective (and I readily if sadly admit that violence can indeed be instrumental for practical goals); of ineffective governance and rampant corruption.

Any outside observer with the slightest substantive interest in the region would have noted with dismay the speedy dismissal in 2013 of the internationally respected technocrat prime minister Salem Fayyed, who ran fatally afoul of entrenched interests in the Palestinian Authority with his anti-corruption campaign. They would have also noted an overall evident lack of realism at both official and public levels of the inescapable weakness of their position vis-à-vis Israel and the draconian compromises that are simply essential in order to get the Israelis to accede to statehood. From a coolly logical perspective this is the only sensible end goal — and indeed, the one that with ruthless pragmatism governed the policies and actions of Israel’s founders.

Like it or not, Israel holds most of the cards in the local arena, while on the larger playing field the U.S. is still the indispensable power when it comes to the issue of Palestinian statehood, not only in terms of the government but also in terms of the Jewish-American community and the larger American public, which have the capacity, should they so wish, to strongly support the formation of an independent Palestine. If Palestinian leaders think they can make an end run to statehood around the U.S. and Israel via the U.N., the E.U., the ICJ, or just via eroding Israel’s will to stand pat for the foreseeable future with an unpleasant but sustainable status quo, they are woefully mistaken, indeed deluded.

The calculus is simple, blindingly obvious, and ineluctable: persuade the Israelis and Americans via thought and deed that Palestine will be viable, peaceful, stable, unified, well-governed and above all non-threatening, and the Palestinians will possess the positive brand — and the reality underpinning it — to get a state and make of it what they will. Until then, “Brand Palestine” will be a millstone to Palestinian aspirations, not an asset.

In 2011, the U.S. State Department launched Virtual Embassy Iran, a web-based platform that aimed to promote American “values and culture” to Iranians. This embassy served as an example of how diplomats can use digital...

In my new book, “Shaping China’s Global Imagination: Branding Nations at the World Expo,” I explore the idea of nation branding—what it is and how it works—through the instructive case of the Shanghai World Expo. Despite the...

While the interest is only increasing among nations in applying branding practices in promoting tourism, investment and overall country perception, the academic treatment of the subject has been narrow and cursory. In my new...

Protests and National Images: The Public as an Emerging Problem in Public Diplomacy

Note from the CPD Blog Manager: This post is based on a panel on Protests and Public Diplomacy, Soft Power, Nation Branding organized by the Public Diplomacy Interest Group at the 71st Annual...