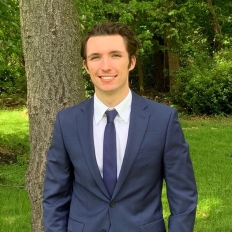 Aidan Manley is a graduate student enrolled in the Master of Public Diplomacy program at USC. He received his undergraduate degree also from USC in May 2020, majoring in East Asian Languages and Culture with language study in Mandarin Chinese.

From Wilmington, Delaware, Aidan arrived at USC in the Fall of 2017. After studying Spanish in high school, he began his Chinese studies when he arrived at college. He participated in the 2019 Princeton in Beijing Summer program, a three-month course of study in China that aims towards improving both language fluency and cultural understanding. Throughout his undergraduate and graduate studies, he has mainly focused on Chinese culture and politics, writing on topics such as the Belt and Road Initiative and Sino-Japanese relations. After graduating with his MPD in May 2021, Aidan hopes to pursue a career path with relation to US-China relations.

This summer, he will be assisting USC Professor and Director of the Center for Public Diplomacy Jay Wang with his research on global nation branding.