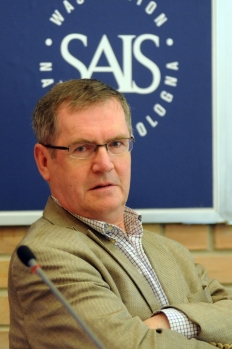 David Ellwood  (GB, 1946) was Associate Professor in International History at the University of Bologna from 1991-2012, and is currently Senior Adjunct Professor, Johns Hopkins University, SAIS Europe, Bologna, where he teaches the course ‘Soft Power and Global Politics.’ His first major book was Italy 1943-1945: The Politics of Liberation (1985), followed by Rebuilding Europe: Western Europe, America and Postwar Reconstruction (1992).

The fundamental theme of his research—the function of American power in contemporary European history—has shifted over the years to emphasize cultural power, hence two edited books on the theme Hollywood in Europe  (Florence 1991, Amsterdam 1995). His large-scale work on America and the politics of modernization in Europe was published by Oxford University Press in July 2012 as The Shock of America. Europe and the Challenge of the Century (2nd edition, 2016). He served as President of the International Association of Media and History from 1999-2004.