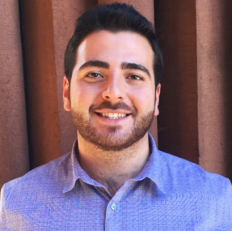 Wael is a second-year Master of Public Diplomacy student at USC. Prior to enrolling at USC, Wael completed his undergraduate studies in international relations with a focus on issues and institutions in the Middle East from the University of California, Irvine. A gastrodiplomat practitioner, and a countering violent extremism (CVE) expert by training, Wael has traveled to the Middle East twice serving as a student diplomat studying the Israeli-Palestinian conflict, and as a cultural attaché on an interfaith mission to Israel. Most recently, Wael served as a graduate intern at the Department of State’s Under Secretary for Public Diplomacy engaging his fluency in Arabic working on counter-terrorism and disinformation projects. Presently, Wael is working with the Department of Homeland Security. Wael, a Bedouin in a global village, navigates Southern California in hopes of resolving misconceptions about the Arab people, one hommus plate at a time.