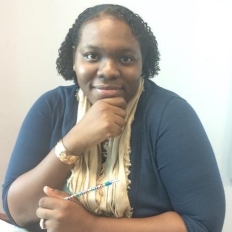 Shearon Roberts, Ph.D. is Associate Professor of Mass Communication and faculty member in African American and Diaspora Studies at Xavier University in New Orleans. She is the director of Xavier’s Exponential Honors Program. She earned a Ph.D. in Latin American Studies from Tulane University’s Roger Thayer Stone Center for Latin American Studies. She researches comparative media systems; mainstream media representations of race, gender and the developing world; Latin America and Caribbean media; and international development. She has published on the role of the media in post-disaster recovery. Her forthcoming book Media Discourse in Haiti examines the last decade in Haiti through the lens of Haiti’s media as the country recovered from the 2010 earthquake. She is co-editor of HBO’s Treme and Post-Katrina Catharsis: The Mediated Rebirth of New Orleans and co-author of Oil and Water: Media Lessons from Hurricane Katrina and the Deepwater Horizon Oil Disaster. She studies the impact of digital media and social movements and is the editor of the 2020 book: Recasting the Disney Princess in an Era of New Media and Social Movements. She has worked as a reporter covering Latin America and the Caribbean, and holds an M.M.C. from Louisiana State University and a B.A. in Mass Communication, with a double minor in Spanish and French from Dillard University in New Orleans.

Roberts’ 2021-2023 CPD Research Fellowship project, City Diplomacy in Advancing Black Racial Solidarity: Opportunities and Implications in the Wake of Social Justice Movements, aims to add to the work of scholars on the potential of the sister cities model as a vehicle to engage in global citizen diplomacy.