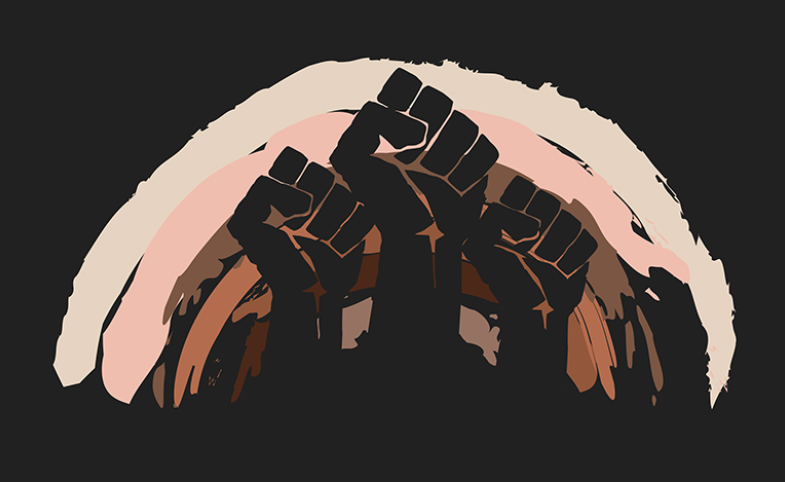 Note from the CPD Blog Manager: This is part of a series by CPD Research Fellow Shearon Roberts on the use of public diplomacy in advancing racial justice and Black racial solidarity. This is the final installment, which addresses diversity of thought through the lens of decolonialism. Read Part 1, Part 2 and Part 3.

Diplomatic theory often emphasizes what “the West does and thinks,” wrote Siphamandla Zondi, former director of the Institute for Global Dialogue at the University of South Africa. A “decolonial turn” Zondi explained, therefore shifts a “Western monologue to a diverse multilogue, giving a fuller account of how different peoples have handled the affairs of the polity.”

Decoloniality can therefore de-Westernize the study of public diplomacy by restoring, elevating and acknowledging non-Western social practices, actions and production of knowledge. As a method, decoloniality allows public diplomacy scholars to consider, outside of Western spaces, how racial justice work is distinct, while at the same time, in conversation with those in Western nations.

Barbados' Prime Minister Mia Mottley, the first woman and Black woman to hold this office in the country’s independent history, stunned the British Commonwealth and the world when she echoed the words of the country’s first prime minister, Errol Walton Barrow, in September 2020. Mottley evoked Barrow’s words for their nation when he “cautioned against loitering on colonial premises.” And after praising Barbados for being often described as one of “the best governed Black societ[ies] in the world,” Mottley announced the country will “take the next logical step toward full sovereignty and become a Republic by the time we celebrate our 55th Anniversary of Independence.” For Bajans, who number roughly 287,025 in population, this Eastern Caribbean nation announced it will no longer have the Queen of England as its head of state.

Mottley spoke of her nation as “locating our influence in the world – ensuring we are seen and heard and not dismissed as being dispensable.” She tied the economic and environmental sustainability of the island to negotiating and engaging the world, as she did in addressing the 53rd Session of the Conference of African Ministers of Finance, Planning and Economic Development hosted in hybrid format in March 2021 in Addis Ababa.

The prime minister called on the shared trans-Atlantic racial experiences between her Caribbean nation and African nations: “Our colonial past has left us both highly dependent on trade, travel and foreign direct investment.” Mottley also referenced racial solidarity between her nation and the continent: “History has taught us, my brothers and sisters, that it is only when we meet together and rebuild our platform of solidarity will we win the big and defining battles of our time.” Mottley then called on African states to work with Caribbean and Pacific states as former colonized spaces in the wider effort for economic recovery from the pandemic.

Black racial justice and solidarity is now a dominant framework of our global landscape. Its framework calls for the overdue recognition of the legacy of oppression across the Black Diaspora.

In “De-westerninizng Media Studies” James Curran and Myung-Jin Park asked scholars to caution “against the self-absorption and parochialism of much Western media theory.” While much attention since 2020 on global racial justice movements has focused on those in the West—the U.S. and the UK—movements for racial justice, led by state actors and non-state actors also had watershed moments across the Global South occurring at the same time. While they may have been featured less in international headlines, they are equally as important in shaping the frameworks in which Global South nations forge connections among citizens of shared historical backgrounds in pursuit of a global agenda that is more fair and just, particularly for formerly colonized spaces and for the Black Diaspora.

Parallel Movements in Conversation with Each Other

During the summer of 2020, few citizens in Trinidad and Tobago had seen regular media coverage of the nation’s First Peoples group, the Warao Nation, until Warao Queen Donna Bermudez Bovell emerged in the midst of the pandemic to join ongoing citizen group calls demanding that the statue of Christopher Columbus be removed from the country’s capital. Racial justice protests happening a few days prior as part of global racial solidarity in the wake of the George Floyd murder are what brought the queen from her community. Decoloniality was in conversation with Black Lives Matter.

At the start of June 2020, Trinidadian actress, radio host and creative artist Abeo Jackson emerged as a prominent voice among a local protest opposite the U.S. embassy. 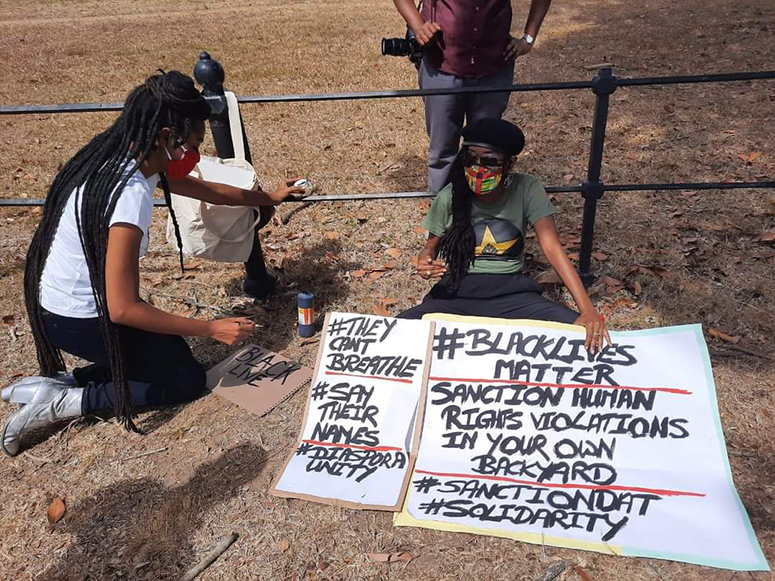 Abeo Jackson and fellow activist Amanda McIntyre before being removed by police from the Queen's Park Savannah in the Port of Spain, opposite the U.S. Embassy Wednesday June 3, 2020 after being told they needed a permit to protest. They returned to the spot Friday, June 5 after the extensive process of obtaining a permit. (Photo by Mariamma Kambon courtesy Abeo Jackson.)

In a personal interview, Jackson, who has lived in both the U.S. and the UK and who has traced her Merikin descent, reflected on what prompted many people of African descent around the world to voice Black racial solidarity in the summer 2020:

“The compelling do something/say something/show solidarity was borne out of firstly, the very human response of looking on in horror at what was happening, a deep simmering, long-standing rage and indignation. A weight of generational trauma black bodies carry as we navigate overt and micro-aggression in spaces that seek to subvert and erase. But after acknowledging that very human reaction, it became more so about recognition of the POWER of Diasporic unity. That this is not just the fight of black bodies and humanity in the United States but black bodies and humanity in all post/neo-colonial spaces.”

Jackson noted that Black racial solidarity is an “echo happening across the [Caribbean] region and Latin America.” It is expanding with public figures like her, enjoining activists and indigenous leaders to call on their local and state actors to address racial inequities and racial violence toward people of African descent. This solidarity may bubble up from citizens and non-state actors, but state leaders like Mottley have mainstreamed Black racial solidarity in calling on Western states to recognize the historic and modern impacts of their intervention and policies in predominantly Black spaces around the world.

As Jackson summarized of the current global movement: “The pressurized situation that is a deadly pandemic has made long-existing injustice and inequity ever apparent, and the Diaspora, now made smaller and more connected through social media, is uniting virtually and fighting back in real time around the globe. #blacklivesmatter is a timely rallying cry that activated a Diaspora.”

Black racial justice and solidarity is now a dominant framework of our global landscape. Its framework calls for the overdue recognition of the legacy of oppression across the Black Diaspora. Its reach was heightened in this decade by the connectivity of social media to digitally transport the phrase "Black Lives Matter" around the world. It has brought forth new voices through Black women serving as non-state actors and state actors, particularly in the diplomatic corps and in government. And it now features prominently in the language of both citizens and leaders alike, communicated across nation states.

Note from the CPD Blog Manager: This is part of a series by CPD Research Fellow Shearon Roberts on the use of public diplomacy in advancing racial justice and Black racial solidarity. This installment highlights the...