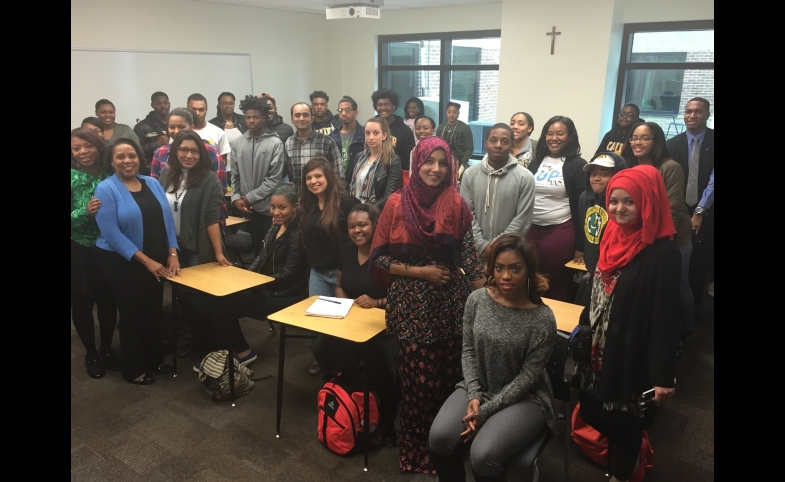 Malala Yousafzai may be the most recognizable Pakistani voice to Western nations in these times about the right to education for young children living in tribal communities, which have become crucial to the global war on terror. However, Malala’s activism did not occur in a vacuum. Malala’s early diary writings as part of a BBC Urdu project blossomed around the same time that women like Rabia Tabassum took to the airwaves broadcasting about the issues facing tribal families affected by the Taliban in provinces like Khyber Pahkhtun-khwa, also called KPK, of which both Malala and Tabassum are from. Tabassum was the first in her family to enter into a media career, as a radio broadcaster for FM 101 for Radio Pakistan of the Pakistan Broadcasting Corporation, in Peshawar. Tabassum said her role was not just to entertain, but to inform the public on issues from child trafficking to workers’ rights.

“In our province it’s very complicated,” Tabassum told a packed room of mass communication students at Xavier University of Louisiana, a historically black university in New Orleans, as part of a delegation of Pakistani broadcasters that visited the city in January 2016. “Why is everyone saying that in FATA [Federally Administered Tribal Areas]…the woman isn’t allowed to go outside, that the woman isn’t allowed to join the media, that it’s not a very good field for females, so why not me, what is the reason behind it? So that was the basic reason that I was trying to find out, why the media is no good for the female, when we search overall in the world, everyone is going into a better field, and they’re facing the competition, and they are facing the challenges as well, so why not me?” 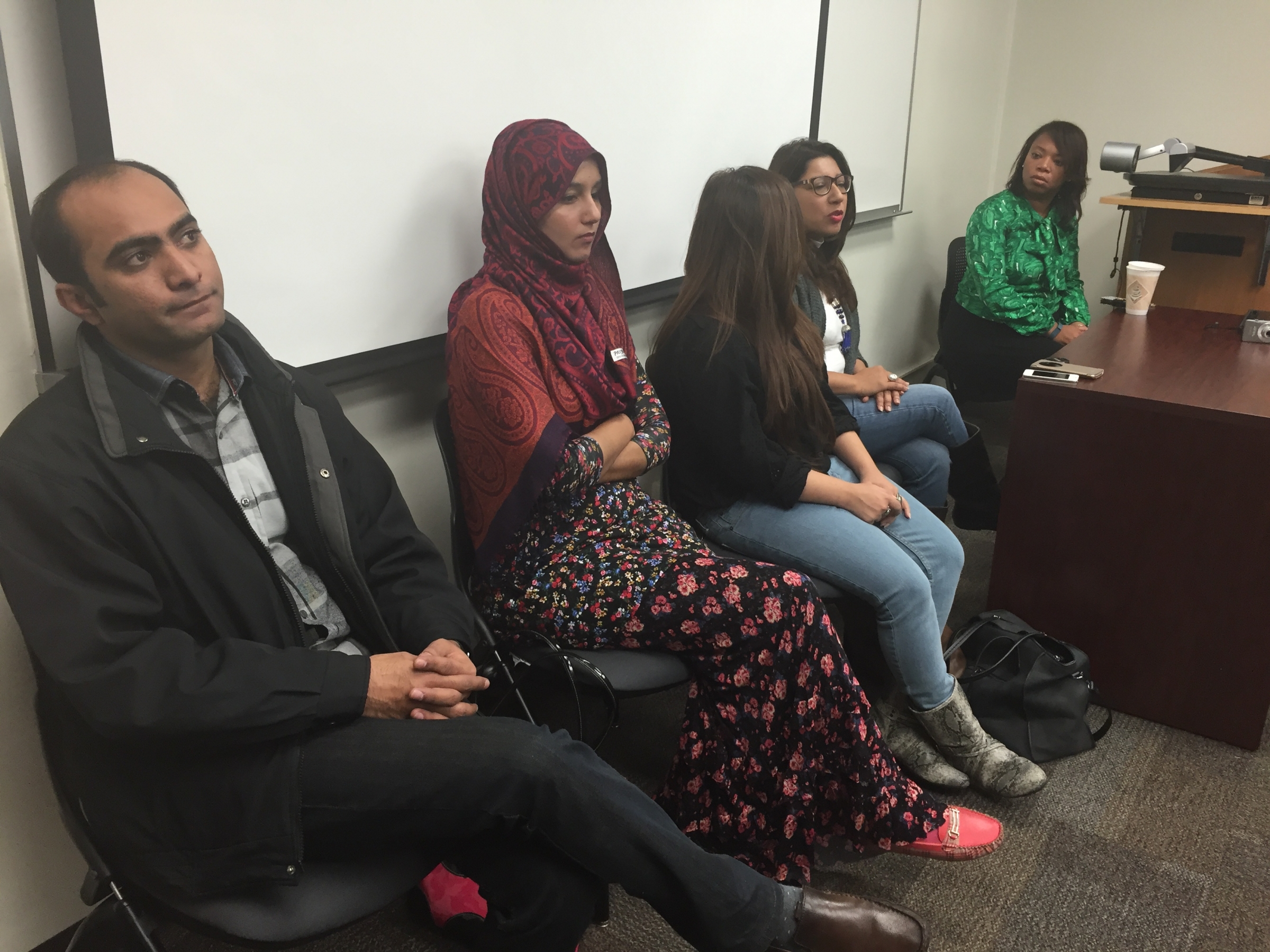 Tabassum and her colleagues may have visited the U.S. (in Tabassum’s case for the first time) to learn about freedom of expression in the West. But the Pakistani journalists also had much to share with their U.S. counterparts about how the media is both a tool for civic engagement and cultural expression that allows marginalized groups to heal and have a voice in their future.

The needs of Pakistanis caught in post-conflict disaster are similar to the economic, social, and even psychological needs of African-Americans in New Orleans after Katrina, the Pakistani journalists said.

In New Orleans, the visitors found common ground. Students cited how the media had provided a voice for an African-American family in the Ninth Ward of New Orleans still fighting to hold onto their five generation-old home, ten years after Hurricane Katrina. It reminded the visiting journalists of how the media also allows tribal families in the KPK provinces to participate in legislation on a federal level that affects their lives and well-being.

The delegation of Pakistani broadcast journalists found commonalities with broadcast journalists in New Orleans as they visited the city as part of diplomatic exchange by the U.S. Department of State’s International Visitor Leadership Program. The State Department’s public diplomacy unit coordinates such visits with international groups, and in this case, the program’s goals were to expose the Pakistani journalists to freedom of expression and ethics within U.S. media, journalism training and education in the U.S., and the impact of technology and social media on civic engagement in the U.S. The New Orleans Citizen Diplomacy Council coordinated the journalists’ visit to New Orleans, allowing them to explore how local media advocates for citizens in the city after Hurricane Katrina.

Tabassum shared how vital the media is in Pakistan to reach the ordinary citizen. “I have one listener in my show, and as a host my name is Radio Jockey Tabassum…in Urdu it means smile,” she said. “So there is this one listener and…he says ‘Tabassum, I have lost my wife and daughter in a car accident. So whenever you do your show, your voice is life…I can say it’s my happiness, it’s my life. So please don’t go anywhere, don’t stop your show and just do all this as much as you can.’ So media—it’s not just about just music, it’s also about counseling and preaching as well.”

FATA province broadcasters like Tabassum and Nadia Khan, an anchor for Equal Access Pakistan Radio program, who has worked as newscaster with the Tribal News Network in Pakistan, both play a role in international diplomacy by allowing public diplomacy efforts to reach remote or marginalized groups through the media. In 2009, then-Secretary of State Hillary Clinton visited the KPK province to support the work being done by the United States Agency for International Development (USAID) as it worked to improve the economic outcomes for tribal people in this province.

“This area, KPK, the province, it’s right across; it’s in the border with Afghanistan, this is the hard-hit area in the war against terror, and there have been a lot of drone attacks within the tribal area…there have been a lot of bombings here,” said Muhammad Muaz Bin Shahbaz, a senior host and broadcaster for Mast FM 103, in Lahore, Pakistan. “So now the U.S. government and USAID have their own support and entrust in this area. There have been a lot of social projects that have been conducted to improve the living standards of these people.”

These economic zones for international support, alongside the government of Pakistan, have allowed these tribal communities to recover or find relief from the ongoing campaigns in the war on terror along the Pakistani-Afghan border, Shahbaz explained. “If these people are enlightened…if these people are shown where the rest of the world is, that they need to come and impart to them, they will also prosper.”

The needs of Pakistanis caught in post-conflict disaster are similar to the economic, social, and even psychological needs of African-Americans in New Orleans after Katrina, the Pakistani journalists said.

“After Hurricane Katrina, a lot of black Americans, they were living perhaps under the—they were middle class, or lower-middle class black Americans that were finding it very hard, the means to survive, because of the fact that they had lost their homes, these homes which they had been associated with for the past four generations,” Shahbaz said.

“So similar is the case there [in KPK], due to the war on terror—these people are displaced from their homes, they don’t have their homes because of the insurgency and all the war that was going on with the Taliban, it was a lot of bombing, these people have lost their homes that were passed on to them for generations. So these people are perhaps on the very same lines as to what the people of New Orleans were. They are now finding it hard to actually find a way or a medium to raise their voices, and that’s where radio and certain other things are playing their part.”

The work of broadcasters in Pakistan provides a two-way communication for tribal areas in Pakistan and across the country. Through a multi-platform use of radio, television, traditional newspapers, and now digital media, Pakistani broadcasters indirectly support the work of public diplomacy efforts by building bridges between communities and foreign entities. But they also empower their communities by reporting on issues that impact those communities. They allow those remote voices to reach government halls in Islamabad, and even impact global policy on the negotiating table for the war on terror.

“So people like [Tabassum] are raising their voices. So she herself has been associated with working with people in these tribal areas, in talking about the various legislations that need to be made to ensure that their rights are taken into account and that they’re supported,” Shahbaz said.

Pakistani broadcasters also play a role in setting the national tone psychologically post-9/11 for one of the key U.S. allies in the war on terror. The media in Pakistan not only provides news and information important to citizens, but it allows for cultural expression that relieves societal shock from a wave of attacks in Pakistan from either the Taliban or other insurgents over the last 15 years. The media sets an important role in helping Pakistanis to move past the sense that they live in a constant state of violence—which, veteran national reporter Kashan Akmal Imtiaz stressed, is not the daily, lived reality, despite the international headlines. Imtiaz, a senior reporter for parliamentary affairs for Radio Pakistan in Islamabad, likewise claimed that the national situation was improving.

“It’s past now—it’s gone, the atmosphere we are talking about, it’s gone now, things are changing."

The Impact of Arts, Culture, and Media in Afghanistan and Pakistan: Implications for U.S. Policy

Project Overview This project assessed the impact of arts, culture, and media in Afghanistan and Pakistan, with the goal of developing recommendations for U.S. public diplomacy policy towards each country. Researchers...