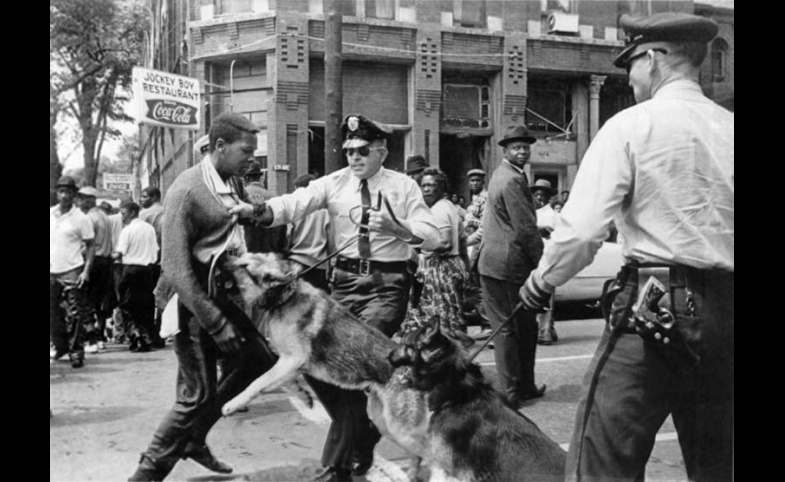 It is a contradiction that has plagued America since the very beginning. It was said that “all men are created equal,” yet slavery persisted in the United States for nearly 100 years after the founding of the nation. Then, during the Cold War, America preached anti-communism and universal freedom abroad, while racial segregation laws were in full swing back home. The Soviet Union capitalized on this inconsistency and used propaganda to undermine the effectiveness of American public diplomacy efforts by portraying Americans as hypocrites who sought to dictate foreign affairs while being unable to manage their own problems. Beginning in the 1950s, the U.S. State Department responded by funding international jazz tours where black icons like Dizzie Gillespie, Duke Ellington, and Louis Armstrong played alongside white musicians. While this strategy did help to bolster America’s image abroad, it didn’t reflect the realities of domestic race relations during that time. Today, one might assume that such foreign allegations of American hypocrisy were left behind with the civil rights movement, but this is not the case.

The latest in a long line of racially charged deaths, the shooting of Michael Brown by a police officer in Ferguson, Missouri and subsequent police brutality toward protesters have elicited global censure. China’s Xinhua news agency called racism in the U.S. a “deeply-rooted chronic disease,” that makes it hypocritical for America to be “always pointing fingers at others” on issues of human rights. Moscow stated that “serious violations of human rights and barbaric practices thrive” in America and Iranian state news has reported extensively on race relations in the U.S., drawing largely negative conclusions. The foreign press in Germany, the U.K., and Cuba have also criticized the ongoing problem of racism in the United States, pronouncing that having a black president is apparently meaningless for achieving a post-racial American society.

While the media might be accused of sometimes blowing things out of proportion, there are other indications that this issue needs to be taken seriously. Amnesty International has sent monitors to Ferguson and recently tweeted “US can't tell other countries to improve their records on policing and peaceful assembly if it won't clean up its own human rights record.” Ironically, the Egyptian government is calling for restraint on the part of American police. Supreme Court Justice Ruth Bader Ginsberg called events in Ferguson and New York City’s stop-and-frisk policy indicators of a “real racial problem,” and took the Supreme Court to task for ceasing to be a leader in improving race relations. While many Americans may view the Ferguson incident as par for the course, the rest of the world has looked on in horror. Becoming inured to domestic atrocities delegitimizes American authority on issues of global human rights and undermines the resources being poured into U.S. public diplomacy. Unfortunately, it seems that little is being done to find a comprehensive solution or to offer a countervailing narrative to global audiences. An FBI investigation has been launched and presidential condolences offered but there has been no obvious action by the State Department, nor any public commitment to promoting legislative changes.

Perhaps the best opportunities for change in Ferguson have been generated at the local level. Leaders from Cincinnati, a city which has successfully resolved many of their racial problems, have offered assistance in beginning the process of racial reconciliation, though receptiveness to the offer is still uncertain. Others have pointed out the power of the vote for effecting change since many relevant positions are elected. There have been efforts to increase voter registration of black residents of Ferguson. The town is 2/3 black, but representation of this population in voter turnout and on the city council is abysmal. While these efforts have some chance of succeeding at the local level, there is far more at stake for the United States.

Racial profiling and voter i.d. laws often serve to exclude minorities and the poor from active participation in the American politics that directly affect their lives. The management of local police is a part of this. These are problems that need to be addressed at the national level as well as the local. U.S. politicians and government officials should recognize that race relations are not only a domestic concern but impact foreign relations as well. If racism in America was an international problem in the 1950’s, it is that much more pertinent in the digital age of Facebook and Twitter. American public diplomacy practitioners should develop a strategy for addressing these concerns externally, but real solutions must also be pursued internally.

Telling the African American Story to the World

Museums are a vital cultural force to advance transcultural awareness and understanding. Historian and curator Dr. Damion L. Thomas of the Smithsonian National Museum of African American History and Culture joined CPD on...