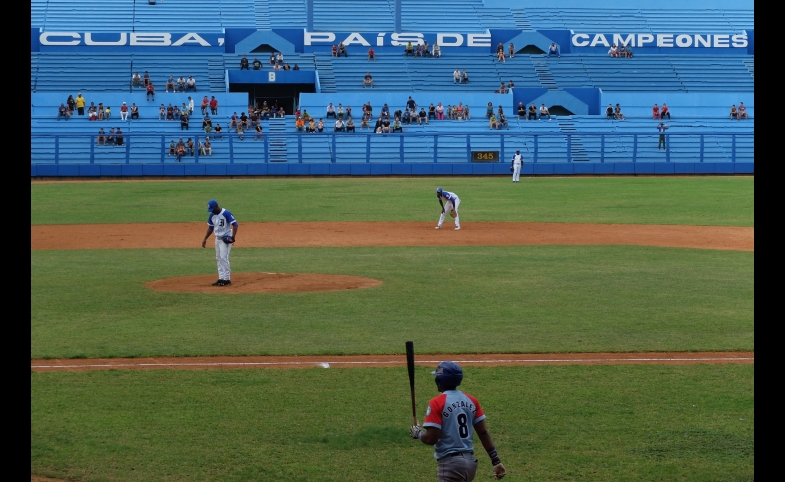 The Dodgers Go To Cuba

Dodger players Yasiel Puig and Chase Utley, along with other Major League professionals, visited Cuba this month on the first MLB goodwill mission in 16 years, inspiring hope that Cuban-American relations are headed for better.

But despite the landmark visit, Cuba still has many legislation changes to make before Cuban baseball players can legally leave the tropical island to play in the Major Leagues.

New legislation allows Americans to travel more openly to Cuba, but the reverse isn’t true. Cuba’s government still has strict restrictions for locals leaving, making it difficult for Cuban ballplayers to be noticed by American recruiters.

But Cubans who want to leave Cuba to play in the U.S. are only left with three risky choices: illegally defect by boat, join the National team and sneak off during an international tournament, or bribe the government to leave.

If Cuban-American relations eventually allow Cubans to freely leave, it wouldn’t initially have a huge impact on the MLB, says Joe Kehoskie, the first non-Cuban, American baseball agent to sign Cuban defectors. Kehoskie has represented over twenty Cuban ballplayers throughout his career.

If a player takes the risk and successfully flees Cuba, that is only the beginning of a challenging road ahead since they are not citizens elsewhere. “Cubans have to establish residency outside Cuba, petition for free agency from MLB and be unblocked by the Office of Foreign Assets Control (OFAC) before they can enter into a contract with the MLB,” reports the Washington Post.

For Cuban athletes, five or more seasons played for the National team exempts players from international signing guidelines making the Cuban professional league appealing. The team travels internationally to countries including Mexico and Japan and it’s not uncommon for one or more players to desert the team for the U.S. while on these trips.

But the Cuban professional program has gone downhill since 1961 when U.S. sanctions were implemented against Cuba, according to Kehoskie. “The Cuban National team has been decimated by the [U.S.] defections, it’s not nearly what it was 10 years ago,” says Kehoskie.

Cubans that leave in hopes of coming to the United States to play professional ball can’t directly come to the U.S. Typically defects are smuggled into Mexico, but recent encounters with Mexican drug cartels have resulted in detours to the Dominican Republic and Haiti.

Many willingly defect by smuggler since they can bring family members along rather than face the unpredictable journey alone. Smugglers can receive up to 30 percent of a player's contract and Cuban ballplayers will continue to defect through the black market until local policy changes.

When word traveled that Cuban defectors were signing lucrative contracts with the MLB, many Cuban players sought better opportunities which is why they were willing to take the risk, says Kehoskie.

Cubans that leave in hopes of coming to the United States to play professional ball can’t directly come to the U.S. Typically defects are smuggled into Mexico, but recent encounters with Mexican drug cartels have resulted in detours to the Dominican Republic and Haiti.

In Major League history, 184 Cubans have played and 95 of those were after the U.S. sanctions were enforced in 1961. Star Cuban players, such as Yasiel Puig of the Los Angeles Dodgers ($42 million), Rusney Castillo of the Boston Red Sox ($72.5 million) and Yasmany Tomas of the Arizona Diamondbacks ($68.5 million) further incentivize the aspiration for the Cuban-American Dream.

Cuba continues to produce top-level talent for the MLB and that won’t change anytime soon, says MLB Roundup, an online blog that reports on the MLB for fantasy league gamers.

“Their players bring a lot of flash to the MLB. Teams are also willing to pay more to acquire Cuban players after seeing their success,” MLB Roundup says.

With the astronomical success of Major League Cuban players currently, many wonder if the new relationship between the United States and Cuba will mean an influx of Cuban ballplayers coming into America, especially since the facilities are already well established here.

“With Cubans in particular, an MLB team that signs a player will want to get them out of Cuba just to begin the acculturation process and put the player into good facilities, where they can get better training, coaching and nutrition,” says Kehoskie.

The MLB has recruiting camps in the Dominican Republic and many expect the League to imitate this in Cuba, but Kehoskie says this won’t be the case. “The best baseball facilities in Cuba are primitive compared to the modern baseball facilities in the U.S. and the Dominican Republic. It’s just a matter of lifting the barriers for Cubans to leave,” says Kehoskie. “Cuba doesn’t have the infrastructure to develop a baseball program, so it doesn’t make sense for the MLB to invest all that money when they already have state of the art facilities a short plane ride away.”

As the new era of Cuban-American relations continues to unfold, the MLB is keeping a watchful eye out for new developments. “While there are not sufficient details to make a realistic evaluation, we will continue to track this significant issue, and we will keep our clubs informed if this different direction may impact the manner in which they conduct business on issues related to Cuba,” the MLB said in a statement.

Until new Cuban legislation is unveiled, Cuban ball players will continue to hold onto hope that a revived Cuban-American relationship could mean a rebirthed era of Cuban players in the U.S.