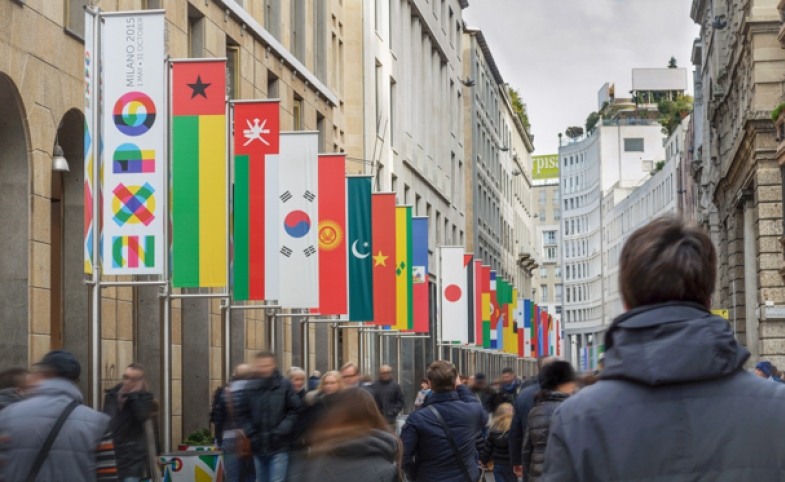 The next World Expo opens its doors this Friday in Milan. The six-month event, anchored around the theme “Feeding the Planet, Energy for Life,” will feature exhibitions by 145 countries and is projected to attract 20 million visitors, about a third of which will be from outside of Italy.

The World Expo (also known as the “world’s fair”) is a grand stage where countries gather together to showcase technological innovations and national cultures to the broader society. It can be traced back to 1851, when London hosted the “Great Exhibition of the Works of Industry of All Nations.” Shanghai hosted the last Expo in 2010, the largest in Expo history in terms of participation (190 countries) and attendance (73 million). And this is Milan’s second time to host such a gathering; the last was the Great Expo of Work in 1906. Indeed the Milan Expo offers a vivid reminder of why this historical institution still matters well into the twenty-first century.

...The Expo is not only to be experienced, but also remembered. As it is a concentrated temporal social occurrence, the outsized event rivets visitors’ attention and fascination. Transient as the Expo experience is, one’s impression of it can be long-lasting.

The World Expo is many things—forums, events, and pavilions, with a widening array of players―from cities and transnational organizations to businesses and non-government entities, but nations and their pavilions remain its central feature and the participation of the general public a core mission. It is therefore a platform for public diplomacy, here broadly defined as a nation’s engagement with foreign publics for better communication and desired relationship. The event facilitates cultural transfer and transformation, as countries bring their cultures into direct contact with foreign publics. This aspect of the Expo is particularly poignant in light of the expanding, increasingly mobile global middle class.

Like other mega-events, the World Expo helps to cast a spotlight on the host city/nation. Besides the prestige associated with hosting the event, it also provides opportunities for participant countries to project their image and identity to a wider international audience through national pavilions. For most participant countries the World Expo remains the single largest promotional event of a nation outside of its own borders.

The Expo also constitutes a unique global communal moment. Unlike the Olympic Games or the FIFA World Cup, the Expo is not a “media event.” The spectacle is to be sensed and experienced by “being there” as a pedestrian on the park grounds and by being immersed inside the pavilion spaces. It embodies an elemental form of human communication through physical movement. As we increasingly live in a digital universe, such physical presence and multi-sensory experience seem to be gaining new currency.

Moreover, the Expo is not only to be experienced, but also remembered. As it is a concentrated temporal social occurrence, the outsized event rivets visitors’ attention and fascination. Transient as the Expo experience is, one’s impression of it can be long-lasting.

Indeed the World Expo represents a locale of “low politics” in the arena of global relations. The event is by design more celebratory than reflective, cooperative rather than oppositional. While the Expo experience is by and large leisurely, national pavilions are normative spaces, for they engage a foreign public in the country’s ideas and ideals to build awareness and understanding. Such national promotion also takes place in the context of cosmopolitanism. The Expo ground is a competitive zone, with every nation trying to present the best of itself to the world. But it is a “conflict-free” space, without any country asserting national or cultural superiority.

It is Expo tradition that each event has a theme. The Milan Expo will focus on issues surrounding food—from exploring its culture and technology to tackling hunger and obesity. Each nation will share its national story of food and its underlying beliefs, attitudes and values. This summer CPD will bring you a special series to spotlight and examine these national stories—how they intersect and diverge in our subjective experiences of food, an ordinary object in everyday life, yet so powerful in shaping our perception and understanding of nations and cultures.