Home|Internet Governance at NetMundial: Public Diplomacy and the Perception Gap 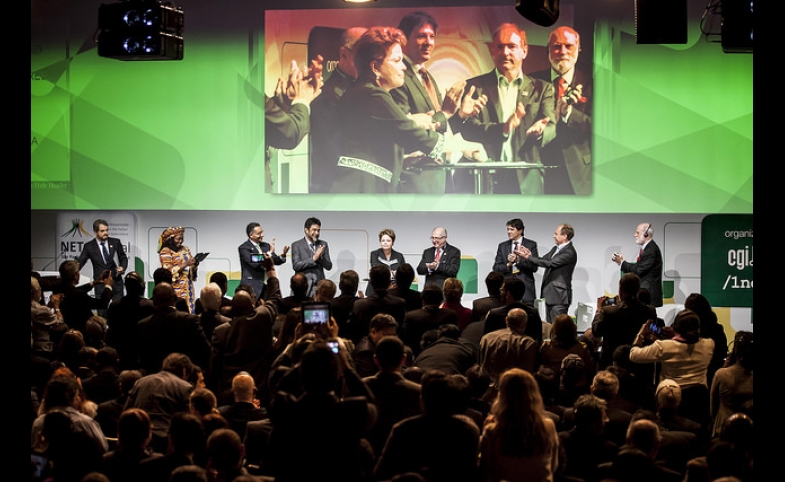 Internet Governance at NetMundial: Public Diplomacy and the Perception Gap

In April, a unique group of over 600 Internet founders, geeks, civil society advocates, government officials, corporate lobbyists, and academics gathered in São Paulo to debate the future of the Internet. Out of the discussion came the NetMundial Multistakeholder Agreement of Sao Paulo, a set of principles and road map for the future of Internet governance. Ostensibly catalyzed by Edward Snowden’s revelations of U.S. government surveillance (though capitalizing on longer-term discussions about the need for open and transparent participation), the meeting was a lesson in public diplomacy in action.

NetMundial incorporated diplomacies of all stripes – digital, cultural, corporate, non-state, and traditional. While focused on the production of a document, it incorporated public attention through online simulcasting, remote participation hubs allowing comments and questions from Chicago to Chennai. A digital platform enabled comments to be made on draft text before participants reached São Paulo.

It began in traditional U.N. style, with a series of speeches by government officials outlining their position statements, but took off in later sessions. Debates over critical issues were punctuated by public displays including civil society members wearing Snowden masks and holding up a sign in Portuguese and English reading “We are all victims of surveillance/We stand with you, Dilma.” On the meeting sidelines a number of digital activists (including Julian Assange, who joined remotely for an afternoon discussion) gathered at the Arena NetMundial for concerts, protests, and discussions around the Web We Want, a “global movement to defend, claim, and change the future of the Web.” In the end, it produced a document out of a rough consensus. While not everybody was entirely happy with the contents, it was nevertheless the outcome of a mostly transparent and inclusive process.

The technical reality of Internet governance in its most narrow definition is rather simple. The only amount of governance the Internet needs on a basic architectural level is coordination of addresses – so that our computers know where to direct the bits traveling between them. This is managed by a multi-stakeholder group called ICANN. The political reality, however, is much more complex, and is based on what people need from and do on the Internet. Coordination of standards, for example, to make it easier to switch from one technology to another, or filters on spam and malware, so that our inboxes and hard drives don’t become inundated with junk. Historically, organizations have formed and dissolved to address problems as they arise, and participants have been primarily of the geeky persuasion. While organizations like the IETF have open memberships, the issues discussed have tended to be highly technical in nature.

The increasing integration of the Internet with our lives introduces new elements that either aren’t traditionally governed, or that have traditionally been governed by governments – like crime. These elements take on a new dimension when they are brought online. For example, how should crimes committed by users in one country against users in another be prosecuted? These types of questions implicate many more users and involve issues of policy just as much as they do the more technical stuff. At the same time, the growing use of portals like Google and Facebook to guide us through many of our online forays means that much of our activity is in fact governed by corporate terms of service. And so over time, the discussion has broadened to include an ever-wider pool of interested participants, both geographically and in terms of their institutional affiliations.

This becomes particularly tricky as Internet governance comes to redefine the type of authority typically wielded by governments. What does free expression come to mean in the online environment? How do we understand privacy laws when much of what we do is turned into data? How are even internationally agreed upon principles – like human rights – understood when they take on a digital dimension? And most importantly of all, what gives the system of rules and institutions involved in Internet governance authority?

Internet governance now directly implicates questions of sovereignty – questions that were highlighted at NetMundial in the most contested issues at the meeting: surveillance, net neutrality, and intellectual property. The technologies of the Internet themselves are imbued with certain ideas of distributedness, openness, and efficiency. At times these ideas are at odds with traditional governing authority, which is centralized rather than dispersed, representative rather than open, and bureaucratic rather than efficient.

When we talk about Internet governance, what we are talking about is how to understand and renegotiate these definitions, which is why it is increasingly becoming the domain of public diplomacy. The discussions are diplomatic in nature and incorporate a broad range of state and non-state public actors. Many (though not all) of the issues talked about as part of Internet governance could in theory be dealt with via existing law. The question up for debate now is whether they should. Maintaining the values held by many of the Internet’s founders – transparency, openness, “rough consensus and running code” – requires that these debates occur in the public eye and open to the Internet’s next billion users.

The weeks following NetMundial highlighted a bumpy road ahead for Internet governance and a strong need for public diplomacy, in the sense of open, inclusive engagement between state and non-state actors. The debates around the transition of the IANA functions away from the U.S. government in particular have illustrated a perception gap over some of the basic history and functioning of the Internet (for a good illustration see this debate, between Jonathan Zittrain and L. Gordon Crovitz, over ICANN). The gap in perceptions over what the Internet is and what it should be thus presents a real obstacle for the negotiations ahead. Public diplomacy will be centrally implicated in a process that involves a multitude of stakeholders speaking different languages, with different technical backgrounds and different views of the future of the Internet.

NetMundial was a start, but it is by no means the end to this process. This summer, many of the same players are gathering for the WSIS+10 review to explore progress toward multi-stakeholder governance. The ninth Internet Governance Forum in Istanbul and the ITU Plenipotentiary Conference in Korea will be two critical moments in the fall that will further shape the future of Internet governance. What that future will look like remains to be seen, but as the participants in São Paulo demonstrated, the process itself will bear many lessons for scholars of public diplomacy.

Sarah Myers West
CPD Blog Contributor
Doctoral student, Annenberg School of Communication and Journalism, USC
YOU MIGHT BE INTERESTED IN...