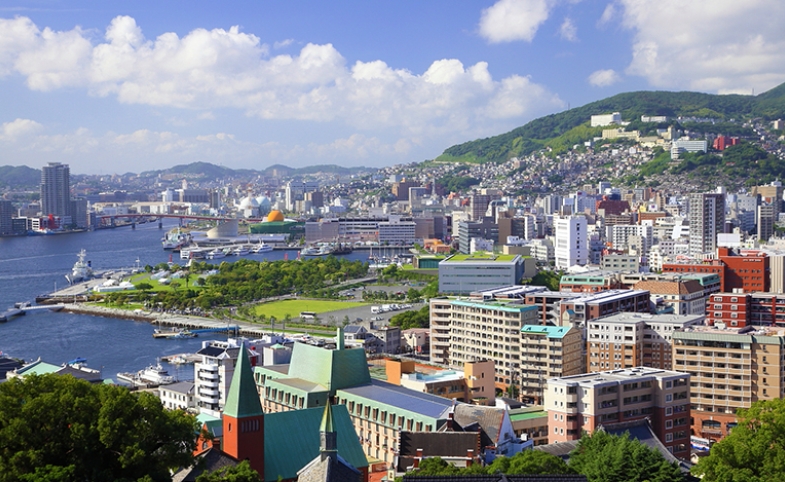 Acknowledgement: The sections on Los Alamos, New Mexico (U.S.) and Hirado, Nagasaki (Japan) were informed by survey responses conducted for an ongoing academic project on city diplomacy for Nagasaki University of Foreign Studies. The author would like to thank the anonymous respondents from those cities for their help.

As a researcher based in Nagasaki, Japan, I have come to see city diplomacy a little differently. Global engagement need not be limited to big cities. Despite having a population of around 400,000 people, Nagasaki has become a global city in a number of ways. As one of only two cities to have suffered the tragedy of an atomic bomb explosion, Nagasaki is an important advocate for nuclear abolition, speaking out in global forums such as the first meeting of the UN Treaty on the Prohibition of Nuclear Weapons (see Mayor Tomihisa Taue’s speech here) and fulfilling important leadership roles in the advocacy network Mayors for Peace, an organization that counts more than 8,000 cities as members.

Why do small cities become globally involved? ... [U]sually historical connections or a local specialization are the keys to global engagement.

Scholarly research has already noted the important contributions of Nagasaki (see here and here). However, these contributions are just a starting point for thinking about city diplomacy as something that exists beyond big cities. What other instances of local diplomacy can be found in cities with even smaller populations?

Hirado is a city in Nagasaki Prefecture, Japan with a population of approximately 29,000 people. Despite its small size, Hirado stands out as a city that makes the most of its resources to engage the world. Because Hirado was the site of early Christian missionaries and the first Dutch East India Trading post in Japan from 1609 to 1641, it is an important site for cultural heritage and tourism. The historical background explains some conspicuous aspects of Hirado’s global relations. Their city hall has a separate division called “Cultural Exchange” (bunka kōryū) staffed by specialists (“Coordinators of International Relations”). As part of its cultural exchange projects, the city has a fund to encourage international exchanges and cooperation. The city also maintains three sister city relationships, including one with Noordwijk, South Holland, Netherlands, emphasizing the city’s Dutch heritage. The city is a member of at least two city networks: Mayors for Peace and Cities Race to Zero, a network of cities and other organizations dedicated to realizing a carbon neutral world.

Los Alamos, New Mexico in the U.S. is a county with a population of approximately 19,000 people. Like most small regions with extensive global relationships, its activities are based on local identity, history and expertise. Los Alamos is well known both for its role in the development of the atomic bomb and its continuing role in scientific research related to national security through the Los Alamos National Laboratory. Local expertise has afforded Los Alamos a unique opportunity to partner with Japan and several Japanese corporations to demonstrate the viability of smart grid technology. From 2009 to 2015, Los Alamos was the host of a joint U.S.-Japan Smart Grid technology demonstration site. It is also the location of the Los Alamos-Japan Institute, an organization that hosts events, fosters dialogue and builds partnerships with atomic bomb survivors, holocaust survivors, artists and social activists. Its one sister city relationship is with a city well known for its nuclear research (Sarov, Russia). Though this relationship has been mostly inactive because of U.S.-Russian tensions, in earlier years the two cities enjoyed a close relationship, even sharing expertise on issues related to health.

Do even tiny villages have international relations? Vaux-sur-Aure, France, a village with a population of approximately 300 people, is a good place to start. Vaux-sur-Aure began a sister city relationship with the small town of Sotome, Nagasaki in 1978. Vaux-sur-Aure was the birthplace of Marc Marie de Rotz, a French missionary who came to Sotome in 1879 and was well known for his missionary work in the area. In Sotome, a memorial hall was created in 1968 to honor the missionary, and ten years later, a sister city relationship between Vaux-sur-Aure and Sotome was established. In 2005, Nagasaki City took over the relationship when the city of Sotome was incorporated into Nagasaki City. As part of the relationship, the two cities have sponsored numerous citizen exchanges and charity events, including a concert by Vaux-sur-Aure to help the victims of the Great East Japan Earthquake. A timeline of the sister city relationship is available here. You can view Vaux-sur-Aure’s message of peace to Nagasaki on August 5, 2020 here, which was posted several days before Nagasaki’s mayor delivered his own peace declaration on the anniversary of the atomic bomb being dropped.

Why do small cities become globally involved? In the cases examined above, usually historical connections or a local specialization are the keys to global engagement. Thus, for those cities medium and small that are looking to become more globally involved, the first step is to look within. What makes your city special? What does your city have in common with cities around the world? What global networks can you contribute to and benefit from? As the examples above demonstrate, there are ways for cities of all sizes to engage the world.

“Zan, Zendegi, Azadi!” This chant echoes today throughout Iran, but the concerns are shared across borders and therefore call for cross-border solidarity: protesting everything that is undermining "Woman, Life, Liberty."...