Home|Mapping the Playbook: To facilitate a more collaborative public diplomacy

Mapping the Playbook: To facilitate a more collaborative public diplomacy

This task might be simplified if we recognize the bureaucratic infrastructure as a series of connections – or networks. The task is then to map that network and recognize potential areas of common experience and opportunity for collaboration.

The potential of this approach can be demonstrated using the data from The Playbook. From this data a form of visual search for the case studies can be developed which can demonstrate how it might work for a public diplomacy organization. The Playbook contains historical and contemporary examples of public diplomacy activity. When the connections between the approach and theme of each case study are mapped, the result allows an overview of the data to be read quickly, with the potential for deeper exploration of the connections. The same could be so for an organization seeking to improve its ability to coordinate and collaborate. 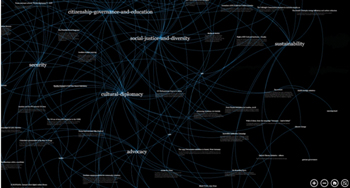 The full version of this image can be found here or on The Playbook front page. When viewing the network, the clusters of projects around the particular approaches used and the issues upon which they focused. The zoom function allows the viewer to explore specific projects of interest more deeply before looking up the full case study.
Quick observations when viewing the image; those projects contributors tagged as relating to facilitation, listening and exchange appear closer to the top of the image, while broadcast and advocacy appear in the lower part of the image. The tagging draws projects of similar approach into closer proximity on the image, allowing an approach to be explored through examining a region of the network.

The approach nearest the center of the image is cultural diplomacy – which is the approach on the spectrum of options for influence between the respective groups nearer listening and telling.

In putting this rhetoric about cooperation and collaboration into action, to support effective international cooperation, any public diplomacy organization will have to manage the interwoven challenges of internal coordination and external collaboration. This will be a challenge that continues to grow as governmental bureaucracies work more closely with commercial organizations and NGO; a point previously emphasized by Daryl Copeland among others and described this week as a diplomatic-industrial complex by Parag Khanna. Much of this was highlighted in the Report of the Defense Science Board Task Force on Strategic Communication, but how to coordinate so much activity across departments and regions?

One approach will be to map the current, and perhaps previous projects, to understand how they relate to particular contemporary objectives. This would provide for a degree of internal coordination. A wider task of mapping participants, understanding behaviors of specific communities and adopting behaviors likely to foster partnership will be key to the development of a more collaborative public diplomacy.